Sacred Heart hosts its 3rd Annual Sexual Assault Awareness Run/Walk: “What is Done In The Dark is Brought to Light”

“We would not have been able to do this without the help of Takini School faculty and students and the support of our community,” the Sacred Heart Center said in a press release.

“What is Done In The Dark is Brought to Light,” awareness glow run/walk is to encourage and support survivors of sexual assault to report their sexual assault and heal from this trauma.

The walk is hosted every year to show the community and program support for anyone who has, is, or will suffer from this crisis in the future.

Sexual Assault is a major issue on Cheyenne River and is usually not reported and therefore these perpetrators are not held accountable for their crimes.

Students from Takini School were brought to Eagle Butte by Stancee Moran to volunteer their assistance with the walk.

In the near future, Sacred Heart Center will be collaborating with Takini School to host a Glow Run/Walk to bring awareness to Sex Trafficking in the western part of the Cheyenne River Sioux Reservation. 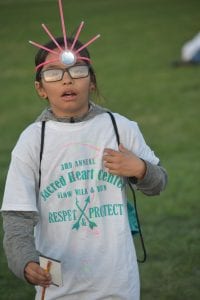 This young participant wore a glow crown on the Glow Walk/Run, the third annual event of its kind sponsored by the Sacred Heart Center’s Respect Project. Photo by Jody Rust 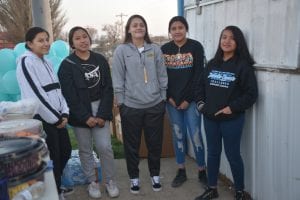 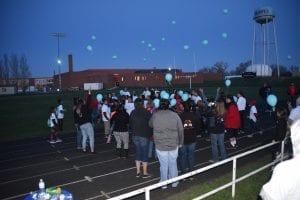 Participants in the Glow Walk released balloons in the air as a symbol of hope for those suffering from domestic violence. Photo by Jody Rust 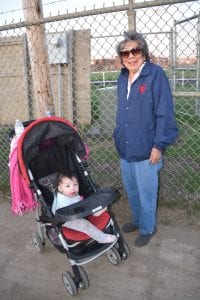 Debbie Day, aged 83, took a minute to greet Dionne Red Dog, aged 10 months, at the end of the Glow Walk/Run held last week to raise awareness about domestic violence. The third annual event was sponsored by the Sacred Heart Center and is a part of the Respect Project. Day was the oldest and Red Dog the youngest of the 166 participants in the walk despite dropping temperatures Friday, April 25. Photo by Jody Rust 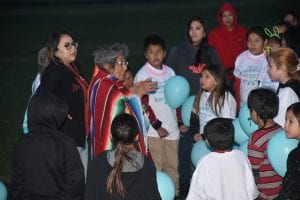