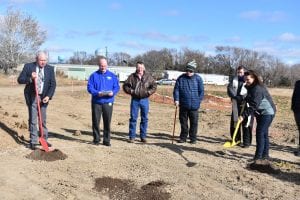 EAGLE PHOTO BY ALAINA BEAUTIFUL BALD EAGLE Staff members of the Sacred Heart Center and visiting dignitaries watch as ground is broken for the new family safe shelter in Eagle Butte. The facility will house families who are victims of violence, as well as the SHC Family Violence Program.

At the ground breaking, a circle was drawn on the ground and four shovels painted in the four sacred colors were positioned in each direction: black to the west, red to the north, yellow to the east, and white to the south. Attendees stood on the outer perimeter forming a circle.

“Today we break ground for our building that, while only one piece of all that we do, will be a beacon for the healing work that is at the heart of our mission. The building material and mortar that will stand on this site will house within them care for the minds, bodies, hearts and spirits of the victims and families we serve and our Family Violence staff,” said Master of Ceremonies Greg Fisher.

Fisher continued, “It is with reverence for the sacredness of our Mother Earth and the dignity of our Native brothers and sisters that we will touch shovel to ground in order to create a place where healing can come from the brokenness that has gone before us. Welcome, all, to this important moment in healing the past and creating a better future.”

Father Kluckman then entered the circle and blessed the ground with holy water, praying for blessings for the ground, those who had vision for the new shelter, those who conduct the work of healing, those who designed the building, and “the holy men and women who have lived upon this site from ages past, especially our Native American brothers and sisters.” He also prayed for blessings for the victims and families affected by violence. As he prayed, Father Kluckman sprinkled holy water on the ground and the attendees.

After the prayer, Mike Tyrell thanked everyone who attended the day’s events and announced the shovel bearers before inviting them to the circle: John Lemke to the east, Father Brian Sorensen to the south, Alli Moran to the west, and Carmen O’Leary to the north. Tyrell then spoke about the significance of each direction before he welcomed the shovel bearers to break ground, which they promptly did.

The crowd applauded and thank you’s could be heard. Afterward, soup and frybread were served.

Work on the grounds has already started and is expected to continue with cooperation of the weather. According to a press release from SHC, the facility will “grow the current operation’s capacity to provide compassionate, nonjudgmental care and advocacy through additional space, a state-of-practice layout and enhanced privacy.” It will feature eight bedrooms for individuals or families, two segregated bedrooms for men or families with teenage boys, storage space, meeting space for staff training and victim consultations, and will also include indoor and outdoor play areas.

Such a facility is needed in the area, as statistics show that nearly 34% of women in South Dakota will face rape, physical violence or stalking by an intimate partner in their lifetime. For Native American women, 33% experience such violence every year. Their male counterparts are not immune.

According to indianlaw.org, native women are murdered at 10 times the national rate; 1 out 3 Native women will be raped in her lifetime, and 3 out of 5 physically assaulted. 88% of the perpetrators are non-Indian and cannot be prosecuted by tribal governments.

To help bring awareness about these alarming rates, SHC sponsored a presentation at Landmark Hall in Eagle Butte on Friday, October 25, with activist and advocate Sunny Red Bear serving as guest speaker. Before her presentation, a video featuring Red Bear called, “To The Indigenous Woman”, was shown to the audience. The short film featured a poem from the group, 1491s, which talks about ending complicity among native men and the call to action to protect indigenous women and children.

Red Bear then took center stage and spoke about how historical trauma plays a role in violence among families, and how the cycle of trauma and violence can be passed down generations within families.

“We have precious babies. We need to take action within our families and own lives and bring education and understand where the resources are. Recognize within ourselves to be ourselves and to teach children boundaries,” said Red Bear.

“It is so hard to think about missing and murdered indigenous women and why this is happening. It comes down to the community and teaching our ways to help women. It will take a long time to talk about what it is that we need. It is easy to feel abused, to be lost and not to feel valued. I just want to encourage everybody to be the way for our women. Your community will appreciate your voice,” she said.

Before ending her presentation, Red Bear said that she was a resource for women who wanted someone to talk to and for those who need help. She encouraged the audience to also be support systems for their families and community members.

If you or someone you know is experiencing domestic violence, please call the Sacred Heart Center Family Violence Service Program at 605-964-7233. Help is available 24/7.