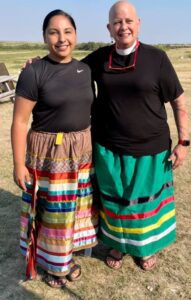 PHOTO COURTESY OF REV. LAUREN STANLEY Rev. Lauren Stanley wears a traditional ribbon skirt given to her by Roxy Hunger. “Mere Lauren” is a faithful friend of Indigenous peoples. She shaved her head in support of a friend who is being treated with chemotherapy.

“Our children wouldn’t let us forget.”

In 2015, members of the Sicangu Youth Council from the Rose Bud reservation raised funds to attend a Youth Conference in Washington, D.C. Rev. Lauren Stanley was the presbyter of the Rosebud Episcopal Mission West. “Mere Lauren,” as she is affectionately called, was able to make a significant donation toward the expenses of the trip.

Chris Eagle Bear was one of the Youth Council members who attended the conference. His grandfather encouraged the group to visit Carlisle Indian Industrial School in Pennsylvania as part of their itinerary. In 1879, nine Lakota youth were taken from the Rosebud Sioux Tribe and placed in the government-run Carlisle School never to be seen alive again. This was part of a much larger U.S. government plan to force the assimilation of Indigenous people into white Christian culture.

At Carlisle and other severely underfunded boarding schools, children were subjected to every form of abuse and neglect and received inadequate nutrition and medical care. Historians believe there are thousands of Indigenous children buried at former Indian boarding schools across the U.S., separated from their homelands even in death.

In a letter dated December 27, 1880, Sioux chiefs White-Thunder, Swift Bear, and Spotted Tail wrote to the Commissioner of Indian Affairs in Washington, D.C. pleading for the return of the bodies of their dead children. “Our hearts will grieve too long if we don’t have what’s left of them back. We want to dig their graves with our own hands, we wait when the birds begin to sing and the flowers begin to bloom…” No record exists of any response.

Rev. Lauren says, “(The removal of children to boarding schools) is a great and terrible sin that white colonizers committed against Indigenous people. Any little thing that I can do to help is an honor and it is my duty.”

The youth from Rosebud visited the school and it changed their lives. Prior to this trip, many of them knew little about the tragic history and trauma of the boarding schools. Visiting Carlisle was an education in itself.

When the Sicangu Youth Council returned home from Carlisle in 2015, some needed a skillful listener as they struggled to make meaning of all they had learned. Some turned to Mere Lauren. As always, she was there to listen, support, and encourage.

The Sicangu youth returned to Rosebud determined to bring back the remains of their ancestors buried at Carlisle. They enlisted the support of tribal leadership with technical and legal issues. “I’m very happy, very proud; very proud of our youth,” says Rodney Bordeaux, president of the Rosebud Sioux.

In early 2016, federal officials came to Rosebud and promised, “We are going to return the children to you and we are going to pay the expenses.” Before that promise could be kept, the presidential election of November, 2016, changed the administration in Washington and stalled the process of rematriation. For the next four years, “Our children wouldn’t let us forget (the children buried at Carlisle),” says Rev. Lauren.

After the 2020 presidential election, the new administration appointed Deb Haaland to be Secretary of the Interior, the first Native American to serve in that cabinet position. Her great-grandfather attended Carlisle and her grandparents were also survivors of Indian boarding schools.

Sec. Haaland established a Federal Indian Boarding School Initiative to provide a comprehensive review of possible burial sites for Indigenous children in the U.S. The first report from the Initiative is due in spring, 2022. “People have wanted answers for a very long time, and I think that we finally have an opportunity to get those answers,” said Sec. Haaland. “It will give people peace of mind…and it will start the healing process.”

In June, 2021, the skeletal remains of the Rosebud children at Carlisle were carefully disinterred, wrapped in buffalo hides, and placed in tiny pine boxes. On July 14, 2021, Sec. Haaland, members of the Sicangu Youth Council, relatives of the deceased children, tribal elders, and other dignitaries attended a solemn ceremony at Carlisle when remains were placed back into the care of the tribe.

“The Army is privileged to reunite the families with their children in a manner of utmost dignity and respect,” Karen Durham-Aguilera, executive director of the Office of Army Cemeteries, said in a statement. “…we hope all the families find some level of solace.”

A caravan with a trailer carrying the nine small pine boxes took two-and-a-half-days to arrive back at Rosebud. “Every single one of my peers or people on our reservation is impacted with boarding schools,” says Asia Black Bull Chu, a member of the Youth Council who traveled with the caravan, “because either our grandparents or great-grandparents or ancestors have endured it, and they have lived through the abuse.”

On Friday, July 16, Sinte Gleska University was the site of a wake honoring the memory of the nine children, celebrating their return to their homeland, and providing solace to their families. Rev. Lauren was at the wake to represent the Episcopal Diocese of South Dakota, to be a witness, and to provide support.

On Saturday, July 17, the remains of six of the nine youths were taken to the Sicangu Akicita Owicahe Tribal Veterans Cemetery and were re-interred there. The other three traveled home with family members to be buried in private locations.

The family of Ernest White Thunder requested that Rev. Lauren officiate at the re-interment of his remains at Old St. James Cemetery. “It was a huge honor to be asked,” she said. “There were lots of tears all around, including mine. We cried for the racism, the abuse, the cultural appropriation. We cried because after 130 years, we finally brought the babies home.”

Effective in June, 2021, after eight years at the mission on Rosebud, Rev. Lauren was promoted to a position in the Diocesan Office in Pierre. About once a month she is back at Rosebud to preach and serve communion.

A descendent of white colonizers once asked Rev. Lauren, “What would you say to someone who feels ashamed about the way European ancestors treated indigenous peoples as well as other people of color?” She gave three clear instructions:

(1) Learn history from the viewpoint of the Indigenous people in this country and in all of the Americas. History is always written by the winners, meaning that we are always missing the standpoint of the oppressed. Don’t let the winners’ viewpoint be your only viewpoint.

(3) Be willing to do whatever it takes to make it right. Speak up. Be an ally. Don’t give up… we (Americans of European descent) have to be willing to work very hard to correct the sins of the past and make sure we don’t repeat them in the future.