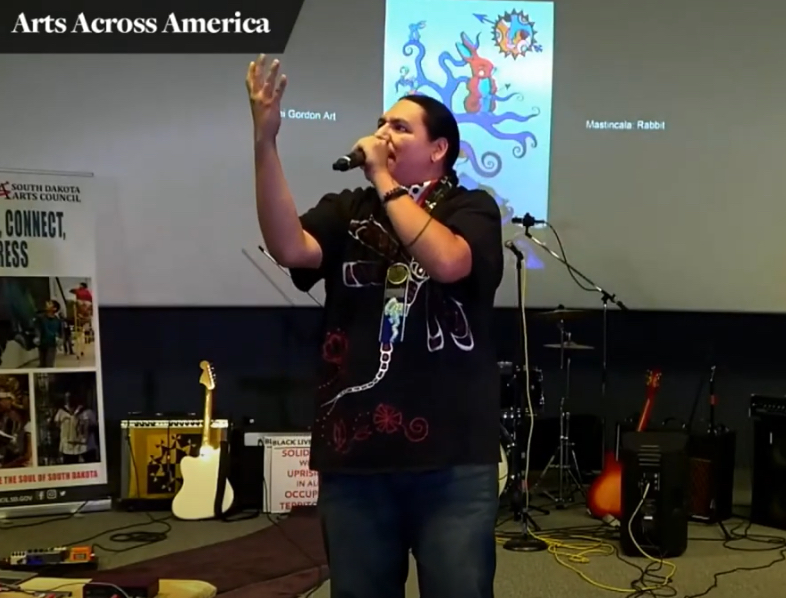 This Kennedy Center livestream of Love Fight Pray: Rising Očhéthi Šakówiŋ Voices was part of the Arts Across America series and was put on with the South Dakota Arts Council and Arts Midwest.  Performances were broadcast from two sites in Rapid City: the Journey Museum & Learning Center and Racing Magpie.

The show was about an hour long, with two musical acts and two spoken word poets. While the livestream audience was never larger than 51 viewers, a few hours after the show, the video had several hundred hits on YouTube.

The first musical act was Talon Bazille, a rap artist and poet, who is Crow Creek Dakota and Cheyenne River Lakota. He is an alum of the University of Pennsylvania. Performing alone on stage with various art images being projected onto the screen during his one set, Bazille paced the set as he rapped. One of the songs he preformed was LFP or Love Fight Pray, the name of the show. His songs had strong lyrics and his performance was very powerful, with many of his lyrics dealing with life on both the reservation and the city.

One of the viewers, Marsha Katz, posted, “Your passion and heart are awesome and your perfor-mance was so powerful.”

Following him, was the first of the poets, Pte San Win. She is a 21-year old Oglala Lakota College student from Kyle, South Dakota on the Pine Ridge reservation. Besides being a poet, she is also an artist working in mixed media, from drawing, painting, photography, photo transfer, and writing. She read three poems, all of which had very intense imagery and talked about the problems of dealing with racism and appropriation of culture.

Viewers loved her work and commented about how moving her words were.

The second musical act was The Wake Singers, who are all Oglala Lakota artists from Mni Luzahan and the He Sapa areas. The members of the band, Reed Two Bulls, Douglas Two Bulls, Michael Two Bulls, Samson Ptacek, and Dan Carroll all play multiple instruments including guitar, piano, and cello, which featured in two of the band’s numbers from the first set. Projected on the screen behind them were various art images and pictures of them doing screen printing and other art. Their music has a very 90s alternative rock sound, with rich lyrics, somewhat reminiscent of the Smashing Pumpkins.

This Rapid City based band’s lyrics covered a wide range of topics, though the audio was not as strong for them as it was for Bazille.

The second poet was Senri/Meta, an Oglala Lakota poet who states that her word is focused on “More words, Less hate.” She prides herself on communication, her writing and ability to promote healing and a safe space for youth. Her’s was the shortest of the four performances, doing only one poem, Oglala Lakota. Her voice was very clear and her pacing was excellent, helping to draw more meaning from the words than might be done reading them. It touched on many of the same elements regarding tribal life and the racist pressures of modern America that the others had as well.

The show ended with a second set from The Wake Singers, filling up the rest of the hour. Taking in the show as a whole, all of the performers did touch heavily on the Love Fight Pray title, using a mix of English, Lakota, and Dakota to create a tightly-woven language mix. There was a lot of frustration at the dominant culture for their appropriation, inability to use their names, and the cultural oppression that makes life harder intermingled with a great deal of hope.

Fighting to remain themselves, refusing to give into hate and despair, their voices all prayed for a better world tomorrow. The show is available for access on YouTube for those who missed the livestream.

The Kennedy Center made sure to include links to everyone’s PayPal or Venmo’s so that if people enjoyed the show, they could give something to the artists for their time.