A wapaha was repatriated to the Cheyenne River Sioux Tribe on Wednesday, September 25. Although details of the wapaha’s origin is unknown, the recent history and its journey to Cheyenne River was shared by Rochelle Ripley, founder of the Hawkwing organization.

It was through Hawkwing, and Ripley herself, that the wapaha made its journey to the reservation last week; however, wapaha’s ties to Cheyenne River go further — in the 1970’s, Reverend Richard C. Allen served as a minister for the United Church of Christ in Eagle Butte and Dupree. Allen’s ministry took him across the nation, until he settled in Glastonbury, Connecticut; coincidently, the same town where Ripley resides.

The Allen family connection to CRST remains strong even today as he serves on the Sioux YMCA Board of Trustees, and his wife on the Hawkwing Board of Directors.

Recently, a family contacted Allen with some news – their elderly father, who passed away, had possessed an eagle feather war bonnet and several pieces of Indian jewelry. The non-native family, who wished to remain unnamed, wanted to return the items to Native people, but did not know how to go about doing so.

Because of his ties to Cheyenne River, the family reached out to Allen, who then contacted Ripley with the news. Ripley was scheduled to travel to Cheyenne River to deliver a truck-load of donations, a trip, which she said, was originally supposed to take place in the summer, but was rescheduled due to the flooding on CRST that occurred during that time.

Allen asked Ripley if she could take the items with her and hand them over to the Tribe, a tremendous responsibility which Ripley accepted.

The family presented a sealed box that contained the wapaha and jewelry, which Ripley said both she and Allen felt should remain sealed and only opened by the Tribe.

“I asked Reverend Allen, ‘Is it [wapaha] Lakota?’, and he said, ‘The family said it’s Sioux’, but of course, being non-native, they probably did not know for sure,” said Ripley.

The box was then secured in another much sturdier one and labels that read “do not touch” and “fragile” were placed on it. On September 14, the precious cargo was loaded into a semi-truck that was filled donations from Hawkwing, and the wapaha began its journey to South Dakota.

According to Ripley, the truck arrived in Takini on September 20, and the box was secured by Takini Superintendent Kit Veit until September 22, when Ripley picked it up to be presented to the tribe the next day.

There, the box was opened and the items were carefully taken out, one piece at a time. A ceremony began with burning of sweet grass and sage, followed with a prayer from Richard Charging Eagle.

Ripley described the ceremony as “simple, straightforward and nice” and said the environment of the room was solemn.

“When the box was opened, it was that moment that took your breath away. It was spectacular. It’s not just the beauty of it [headdress], for me, it was the sense that I was able to play some small part in bringing it home. I was relieved that it was here safely,” said Ripley.

Three pieces of turquoise and silver were also in the collection that had “old screw-on earrings. We knew that those were older. We turned it over and it was stamped with the last name ‘Nez’, which Dana recognized as being Navajo,” said Ripley.

The wapaha and the jewelry had tags on each item from the Juells Auction House – a tell-tale sign that the items were more than likely sold and purchased at some point in the past.

Dupris counting the feathers, which totaled 31, and each one had yellow horse hair at the tip. Upon first observation, Dupris said the headdress was estimated to be from the Little Big Horn era; however, upon closer observation, the beads on the browband were deemed to be cut-glass style beads, indicating a more modern origin date.

Now that the wapaha is in the Tribe’s hands, Dupris said his office will research it and notify area tribes. Until then, Dupris said that the bonnet will remain unworn, out of respect for it and the family from whom it comes from.

“There are prayers and ceremonies that come with it. There are very few bonnet wearers within tiospayes nowadays. It is important to remember these teachings,” said Dupris.

Ripley looked back at the entire experience and shared her sentiments after the ceremony.

“This could have so easily been lost to antiquity. Where did it come from? Whose family was it? That’s sort of the sad piece of it — we may never be able to identify it. But for now, itt’s home, it’s safe. This is the restoration and returning to Native America what was always ours,” said Ripley.

Remi Bald Eagle said in the traditional way, the wapaha has chosen to come to Cheyenne River for a purpose that, for now, is unknow.

“This wapaha is on a journey. We are not sure where it will end up or how long that journey will be, but we are honored that it is here with us. We have to do our best to take care of it. The wapaha wasn’t in native hands before, but it is going home, and we can give it the respect and reverence the wapaha is due,” said Bald Eagle. 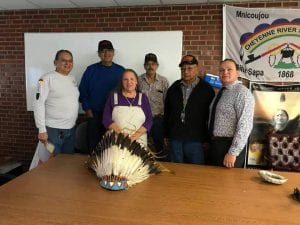 A delegation from the Cheyenne River Sioux Tribe met with Rochelle Ripley, founder of the Hawkwing organization, on September 25 to welcome and bless a wapaha that made its journey to CRST. Standing left to right is Lyle Cook, Dana Dupris, Rochelle Ripley, Robert Dunsmore, Richard Charging Eagle, and Remi Bald Eagle. The wapaha was given to the CRST Cultural Preservation Office, where it will be kept and researched until its family ties can be found, said Dupris. PHOTO BY DIANE ALVERIO 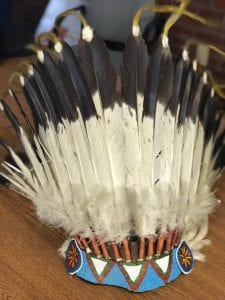