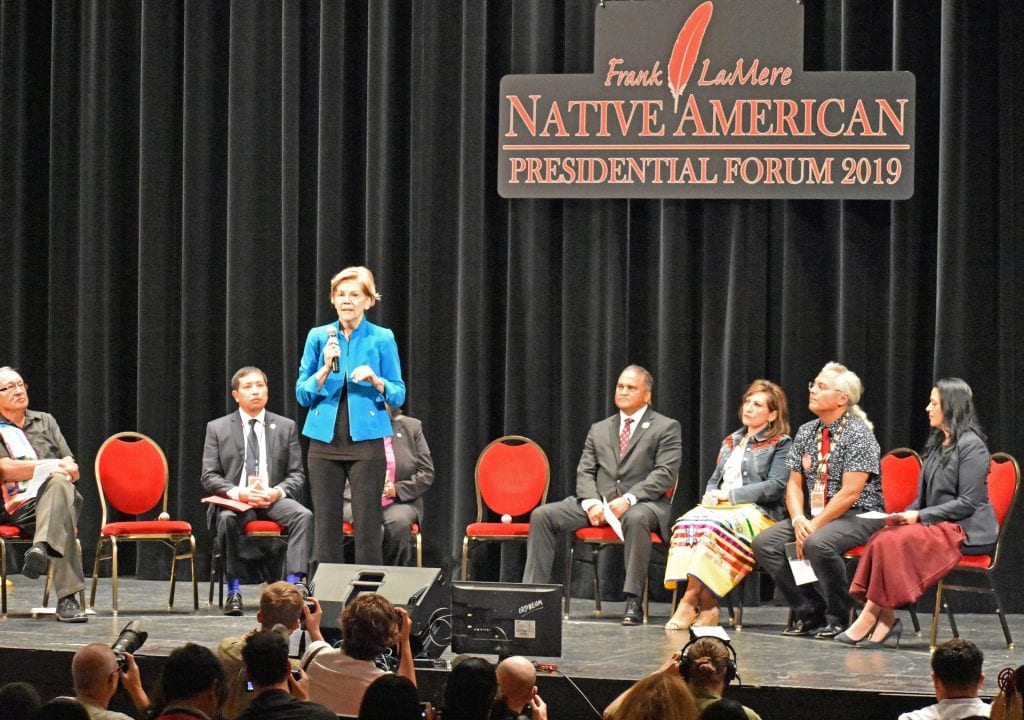 PHOTO BY REMI BEAUTIFUL BALD EAGLE       Presidential candidate Senator Elizabeth Warren speaks at the Frank LaMere Presidential Forum that took place in August. Warren is expected to introduce the Remove the Stain Act to the Senate.

Last week, the Argus Leader reported that U.S. Senator Mike Rounds does not support the Remove the Stain Act (H.R. 3467), which is legislation that would rescind 20 Medals of Honor given to 7th Calvary soldiers who participated in the massacre of over 250 unarmed Native American women, children, and men at Wounded Knee Creek on December 29, 1890.

Representative Denny Heck (D-WA) introduced the bill this past June, stating, “There was no honor in the killing of hundreds of innocent men, women, and children. The Wounded Knee Massacre is a stain on the legacy of the Medal of Honor, the highest recognition that can be given to U.S. servicemembers for acts of valor. The 129 years that have passed since the massacre have not absolved us of our responsibility to do the right thing.”

The bill has bipartisan support and 15 co-sponsors, including Representatives Debra Haaland (D-NM) and Sharice Davids (D-KS), who are the first Native American women elected to Congress.

On Cheyenne River, the legislation is important and holds great significance- many of those who were killed during the massacre were Mnicoujou from the areas of Cherry Creek, Takini and Bridger. In fact, the word takini, means survivor in Lakota, and community of Takini is named after the survivors who returned after the massacre occurred.

In 2001, the CRST Tribal Council passed a resolution asking the federal government to revoke the medals.

Heartbeat At Wounded Knee 1890 Chairman Manny Iron Hawk, who traveled to Washington, DC with a delegation of Wounded Knee descendants to help introduce the bill, said the journey and creation of the bill has been deeply rooted in spirituality and has been guided by the ancestors. For these reasons, he believes the bill will be passed and the medals will be revoked.

Since its introduction, the bill has gained the support of the U.S. Presidential candidates Julian Castro, Senators Kamala Harris, Bernie Sanders, Mark Charles, and Elizabeth Warren.

In August, the Huffington Post reported that Warren planned to introduce the bill to the Senate, and in a statement issued to the Huffington Post, she said, “At the Wounded Knee massacre, hundreds of Lakota men, women, and children were slaughtered by soldiers who received Medals of Honor. These acts of violence were not heroic; they were tragic and profoundly shameful. This bill respects and honors those who lost their lives, advances justice, and takes a step toward righting wrongs against Native peoples.”

In last week’s Argus Leader’s report, Senator Rounds said he “believes that what happened at Wounded Knee was a massacre, not a battle, and the criteria for awarding a Medal of Honor has more value now than it did then” and went onto to say, “We’re now guessing” about what the individual soldiers did.

Elaborating further, he said, “I don’t think we should, at this time, go back and decide and change the recommendations of forefathers, even if we disagree vehemently with the outcome of the incident, the massacre.”

After the bill was introduced, South Dakota Republican Representative Dusty Johnson, called revoking of the medals an “aggressive act” stating, “there’s a better, more nuanced, more facts-driven way for us to move forward.”

Earlier this month, Johnson issued a statement saying, “Wounded Knee is a tragic chapter in our nation’s history that we should all learn from. Medal of Honor recipients of today are held to a tremendously higher standard. It’s painfully clear from our history, the U.S. didn’t have these same standards in 1890. The Army has reviewed these medals in the past and I’ve been in conversations to determine whether another review may be warranted.”

So far, the Congressional Medal of Honor Association has remained silent on the issue. According to the legislation, the Medal of Honor has been awarded 3,522 times, including 145 times for the Korean War, 126 times for World War I, 23 times during the Global War on Terror, and 20 times for Wounded Knee.

For more information about the bill, visit www.congress.gov and search for “Remove the Stain Act”.