Rediscovering Íŋyaŋ Phežúta, the lost Medicine Rock of the Lakota

Those who are old enough to remember the Old Cheyenne Agency probably remember the Íŋyaŋ Phežúta, the Medicine Rock, which once lay not very far from the east bank of the Missouri River near what was then known as Forest City in modern day Potter County.

Since 1990 the Medicine Rock has been housed in the Dakota Sunset Museum, which was built to specifically shelter the rock, prominently located along the west end of Commercial Avenue in the small town of Gettysburg, South Dakota.

Billboards on the outskirts of the windswept hamlet encourage those out on the road to stop by, visit, and enjoy the historic rock; hopefully taking a moment to sign the guest book before they depart.

For the last several years, along the main route passing through town, US Highway 212, the Medicine Rock Cafe has been in and out of operation, offering passers-by widely varying quality of middle-American fare.

Relocated to Gettysburg in November of 1953 from where it was situated for millennia on a hillside along the meandering river, the Medicine Rock was at the mercy of tourists and other vandals while it was left openly displayed in a turn-off along Highway 212. The construction and subsequent inundation of the river basin resulted from the Oahe dam development.

Modest restoration efforts have been made in its current museum home to remove thoughtless graffiti and other unsightly, manmade blemishes.

The Medicine Rock is a rather large limestone boulder measuring sixteen by eight feet in length and width, while weighing in at more than 40 tons. The rock is believed to have been deposited from in or near the state of Missouri during the retreat of the glaciers that covered the region at the end of the last ice age over 11,000 years ago.

The impressions of human foot and hand prints are etched into the face of the rock from unknown forces.

The rock is and by all accounts has always been considered sacred to the traditional Lakota, Dakota, Arikara, and Mandan who have lived within the rock’s proximity for at least centuries.

The earliest European and American colonists, when coming upon the rock in the 18th and 19th centuries, recalled or recorded stories of spiritual mysteries involving rites conducted by the Lakota and Dakota who willingly shared such information with the newly arrived visitors.

An Associated Press story about the Medicine Rock from March 31, 1953 recounts, “The Sioux of the region consider the footprints as having been made by the Great Spirit. Before entering battle or other important events, records show, these Indians held ceremonies at the rock and buried gifts to the Great Spirit.”

Another AP report from August 26, 1953, drawing on much earlier accounts, explains that the Lakota and Dakota, “held the stone in the greatest reverence.”

Unfortunately, such widespread knowledge and understanding of the significance, if not believed sacredness, of the rock for the Indigenous population did not prevent decades of abuse from travelers, curiosity seekers, and others in the area. Rightfully, concerned local Potter County residents with an appreciation for its historical and scientific value, came to the aid of the Medicine Rock in time to preserve the quickly fading impressions for future generations.

The exact origins of the prints on the Medicine Rock have still not been determined.

Given the ancient era when the rock was formed, it is not possible for humans or other mammals to have been present to walk across the surface to create what is now present; Indigenous oral tradition provides different accounts of how the prints were made, but none can be reasonably considered definitive or authoritative.

Today, the Medicine Rock remains a vibrant and integral asset to the Gettysburg economy, and an apparently neglected, if not forgotten part of the written and oral ancestral histories of the Cheyenne River Sioux Tribe. 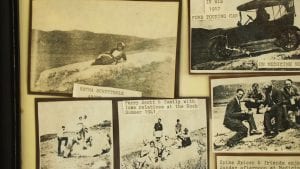 Photos of people visiting medicine rock before it was sheltered in a museum. These photos are located in the Dakota Sunset Museum in Ghettysburg, South Dakota along with the rock itself.

For more information about the Medicine Rock you can contact the Dakota Sunset Museum through their website, www.dakotasunsetmuseum.com, or the Cheyenne River Sioux Tribe’s Preservation Office at 605-964-7554.