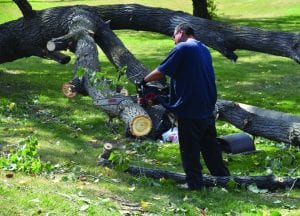 “We got everybody back on within 48 hours,” Larson said.

Larson said lightning strikes can affect both overhead and underground lines, because lightning follows the path of least resistance, often hitting a riser pole, a conductor that runs into the ground to buried lines.

The ice storm during the winter of 2010 left some people out of power for weeks.

“We like to restore power as quickly as possible, but the linemen can’t go out until the storm has moved out of the area. That lightning is unforgiving. Safety is our utmost concern.”

Larson said storms are too unpredictable to budget for ahead of time.

There is a process that need to be followed to get the appropriate funding for covering storm damage costs that begin with the county filing for a state of emergency status, then the state approving that status, and then considering if FEMA will get involved or not, Larson said.

Around Eagle Butte, residents and the City of Eagle Butte contended with downed and damaged trees as a result of the lightning strikes.

A large tree toppled in Shupick Park caused damage to a light and a garbage can, and city workers had the area sectioned off the next day to clear the damage.

Cadyn Durpis of Eagle Butte said she had her phone plugged into the outlet when the electricity went on and off.

Since then, she noticed her phone freezes up after four minutes of use and operates slowly.

“Electrical surges can instantly overload and short out the circuitry of home electronics and anything else plugged into the wall, or they can degrade them over time. Learning more about surges can help save money and how to protect your property,” according to article titled, “Are power surges damaging your electronics?” on the Statefarm.com website.

Purchasing surge-protection devices such as an electrical strip or an outlet specifically labeled as an SPD is the best protection for electronic devices against electrical surges, according to the article.