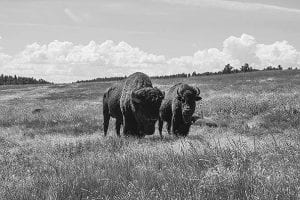 The buffalo herd has been under the care of Game, Fish, and Parks for the past several years, with the Buffalo Board made up of Tribal Council members, still managing the authority.

On April 10, 2017, the Buffalo Board decided to get Pte Hca Ka back to being self-sustained. GFP Director, Dennis Rousseau was more than agreeable to this move as the buffalo were a burden to his budget.

So, at that point the Board started the transition with Mr. Rousseau’s help and at this time is still in transition.

Since the April meeting, the Board has been moving forward on restoring the herd, the corrals, the pasture fences, and the land the buffalo run on. The Board cleared all outstanding debts and purchased some equipment and hired personnel to care for the herd.

With the help of GF&P the week of October 23, they started rounding up the buffalo and began sorting on October 24, taking out the ones for sale as they need to get the herd back down to a manageable size.

There is still a whole lot that needs to be done in order to reach the goals of the Board. So far the Board hired a herd manager, but they still need a business manager, bookkeeper, and secretary. While they are working towards their goals, it will remain Pte Hca Ka’s policy to provide meat, jobs, and whatever they can for the people of the CRST.

The buffalo herd of the CRST has been very controversial as some people don’t see the big picture. The buffalo and Lakota people have been together for centuries. The buffalo have provided the Lakota people, with food, clothing, weapons, shelter, and a way of life all the way up to now. Even today, they are providing life sustaining things such as food, jobs, and money – among other things.

Last year alone, more than 30 head of buffalo were processed to provide food for the people of this Tribe and the communities for different activities.

Also, the meat was donated to over 20 families.

The buffalo operation provides jobs for tribal members and money for different programs such as the youth and elderly. Pte Hca Ka has given thousands and thousands of dollars back to the people.

All held at North Pasture