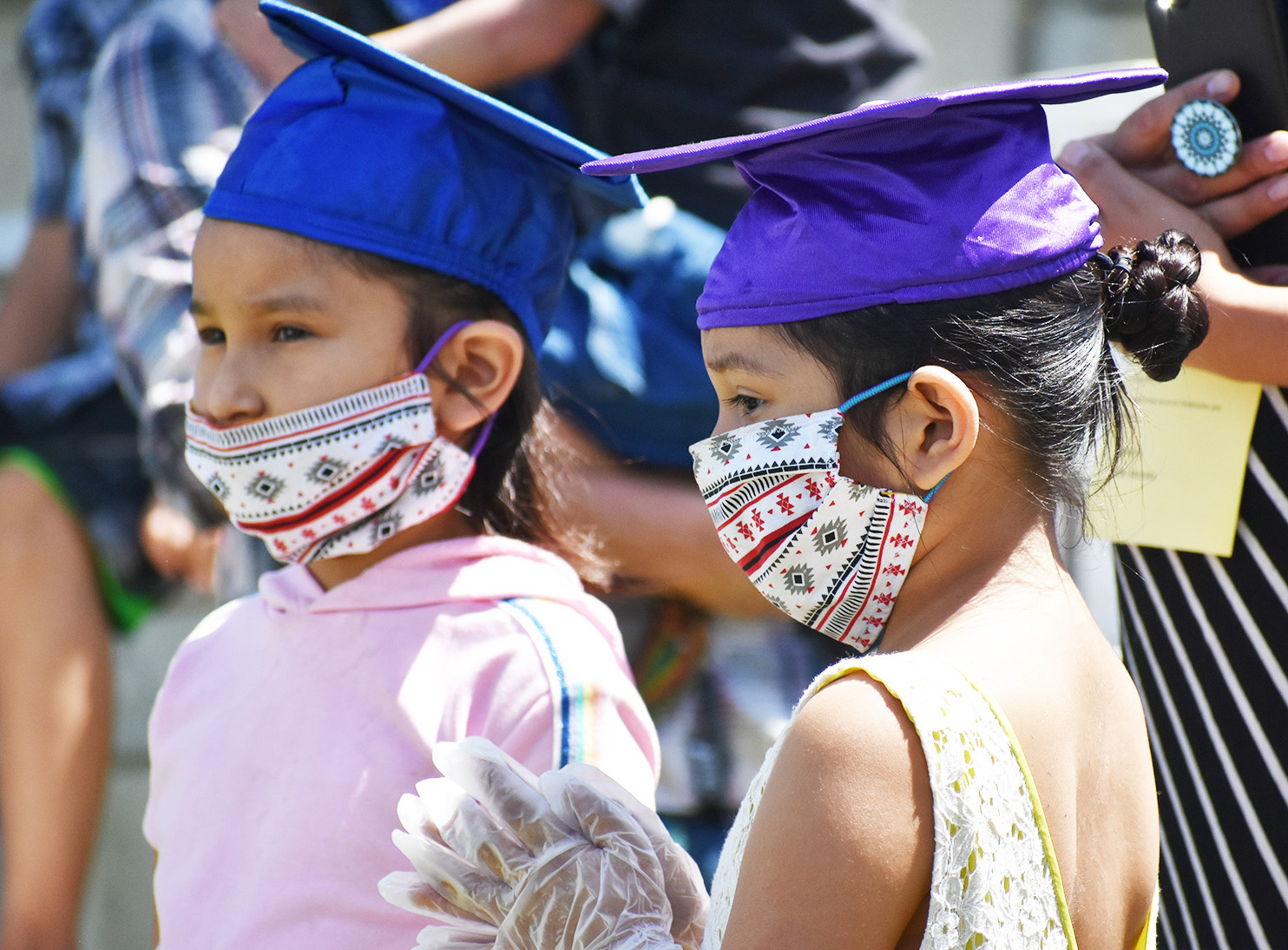 EAGLE PHOTO BY ALAINA BEAUTIFUL BALD EAGLE
Siblings, Leila and Lola Hayes, prepare for grand entry at the LOWI graduation on Friday after. Leila completed first grade and Lola graduated from kindergarten. Throughout the commencement ceremony, students wore face masks and gloves as a precautionary measure against coronavirus.

History was made on Friday, May 29 when the Lakȟótiyapi Okáȟtaŋič’iya Wičhóičhaǧe Immersion (LOWI) School graduated its first class of Lakota language speakers at the Cheyenne River Sioux Tribe wacipi grounds in Eagle Butte.

The immersion school, the first of its kind on the reservation, completed its first year as an educational institution, with the culmination of Friday’s commencement ceremony which saw the graduation of give students- three from kindergarten and two from grade one.

To ceremony was conducted with social distancing in mind and tables for graduates and their guests were set up six feet a part in the powwow grounds. Parents and students were given masks by the LOWI staff.

The event kicked off with Kiukanpi Memorial Drum singers leading the grand entry that consisted of school staff members, parents, and graduates. After circling the powwow arbor, the drum group performed the graduate song and flag song.

After everyone was seated, LOWI Principal Manny Iron Hawk gave the opening prayer before speaking about the importance of keeping the Lakota language alive, saying that lifelong language preservation can begin with learning just one or two words and continuing from there.

“It only takes one person to infect others. If COVID comes onto our lands and if our elders go, who’s going to keep the language going?” he asked.

“If COVID comes onto our lands and if our elders go, who’s going to keep the language going?” – Manny Iron Hawk, LOWI Principal

The principal turned to nature and the Pte Oyate (Buffalo Nation) for guidance during the pandemic.

“We are fighting an enemy we can’t see. We have to protect the children. Long ago, the warriors used to be out there, against the bad that was coming. Like the buffalo, the bulls make a circle around the cows and calves who were in the middle. That is what we must do now. This COVID, I ask you to take it seriously,” said Iron Hawk.

Speaking next was LOWI Teacher Chayo Makes Room For Them who talked about the devastating impacts and traumatic legacy of Indian boarding schools. For decades, the American government’s “Kill the Indian, save the man” policy was a concentrated effort to forcefully eliminate traditional Native American culture, language, and spirituality with the goal of assimilating young Indian children into mainstream American culture.

“Many young ones, and many of their parents, died of broken hearts when they were taken away,” said Makes Room For Them.

“Today is a big day for our students because we are making history. Today on Cheyenne River, we are the first to graduate Lakota language speakers. Our students will carry on what we thought was lost,” she said.

“Today on Cheyenne River, we are the first to graduate Lakota language speakers. Our students will carry on what we thought was lost.” – Chayo Makes Room For Them, LOWI Teacher

Speaking to the young ones, Bald Eagle said, “You guys have done a good job. You are breaking the cycle of oppression. I am proud of you.”

To the adults, he said, “I was asked one time, ‘When someone goes to school and they graduate, what are they?’ Today, there is no question. Today a school is graduating Lakotas. You are Lakotas.”

Speaking once more was Principal Iron Hawk who announced that each students’ name would be called and they were to be accompanied center stage with their parents. The students were given certificates of completion and awards for their academic accomplishment.

Parents were also presented with a blanket from school staff, and teacher Mrs. Makes Room For Them was recognized for her dedication and work.

The Kiukanpi drum group was also presented with a blanket from the school before a closing prayer was conducted.

A meal was served after the ceremony. The students were in high spirits as they enjoyed their gifts of balloons and plush toys. 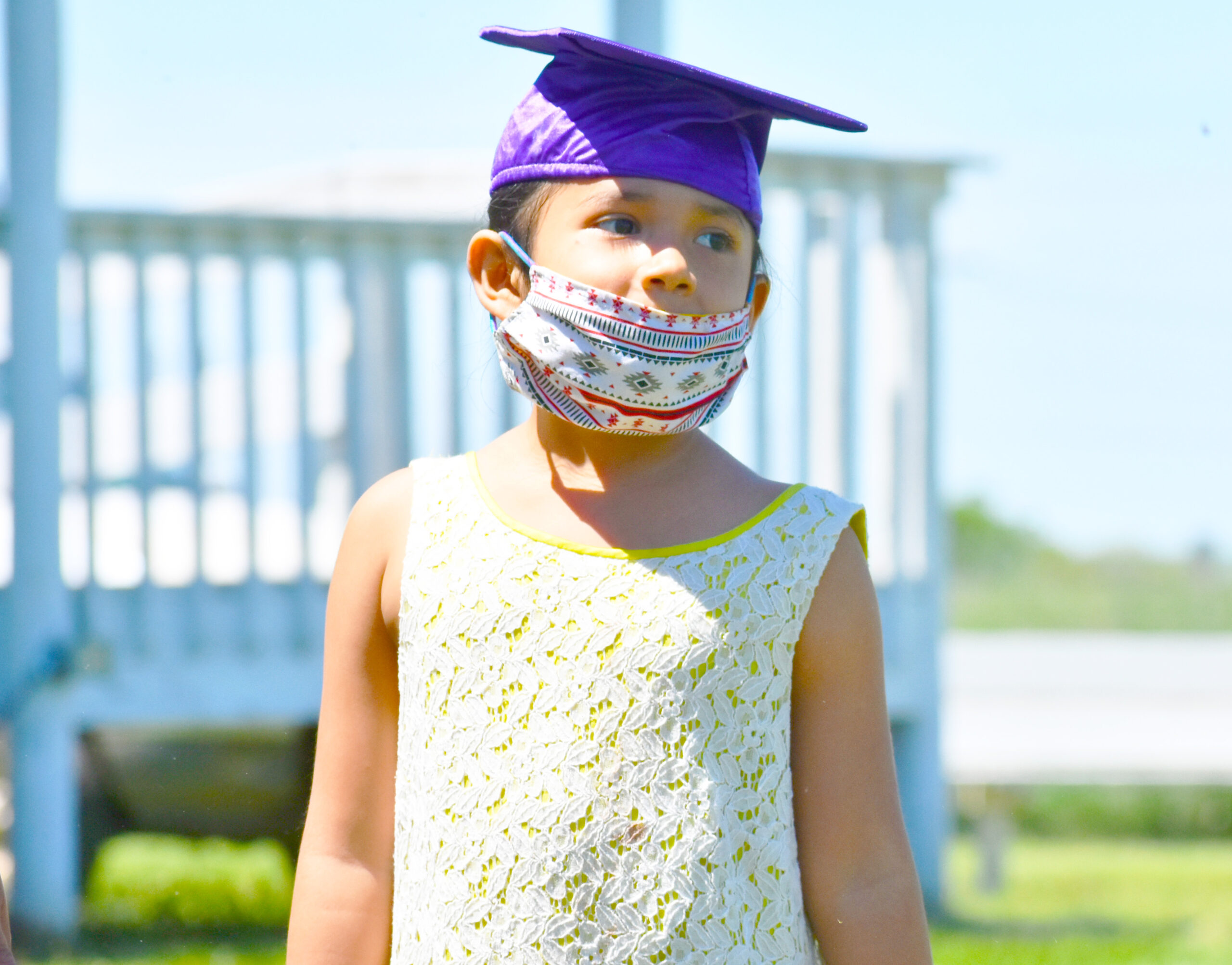 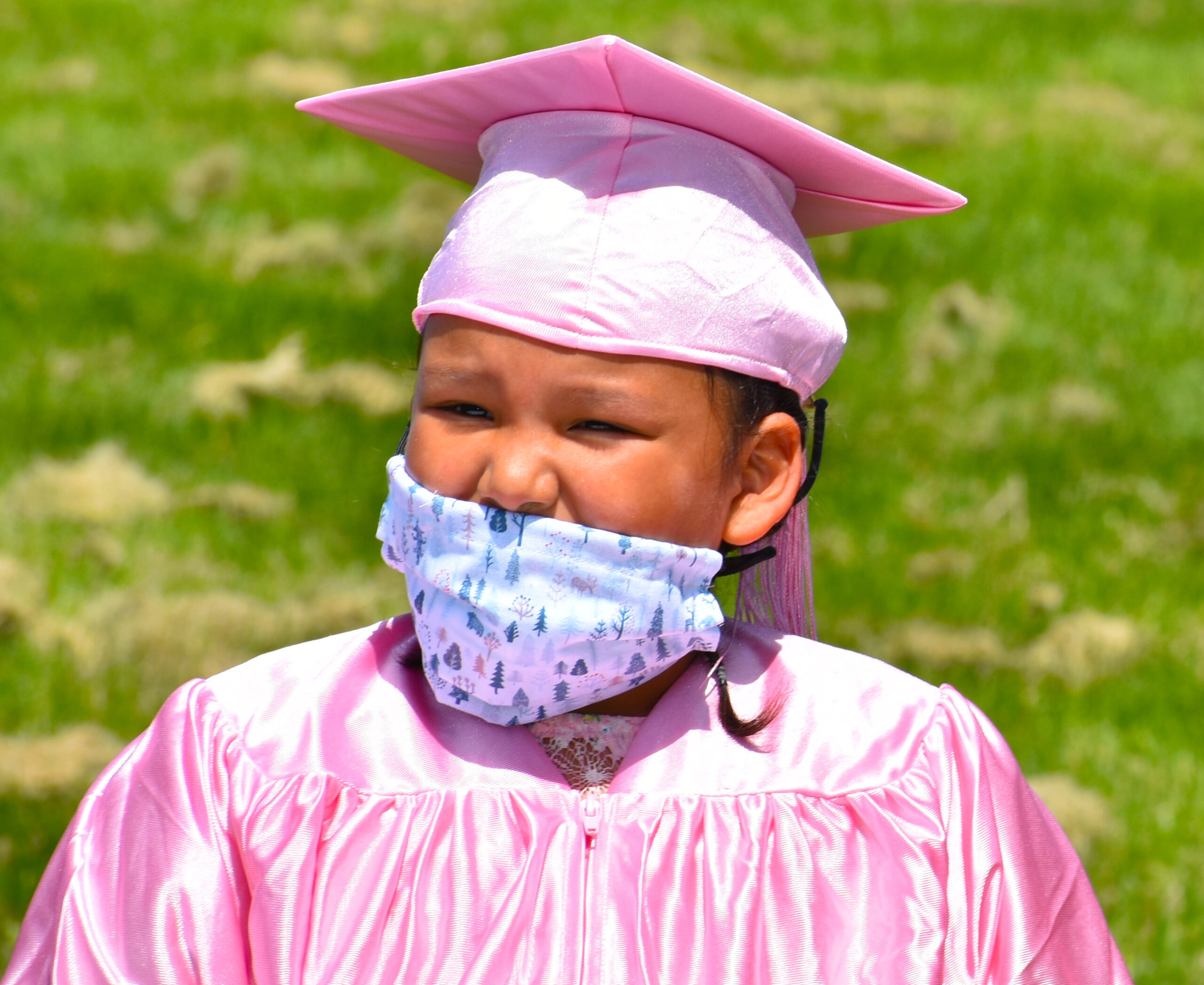 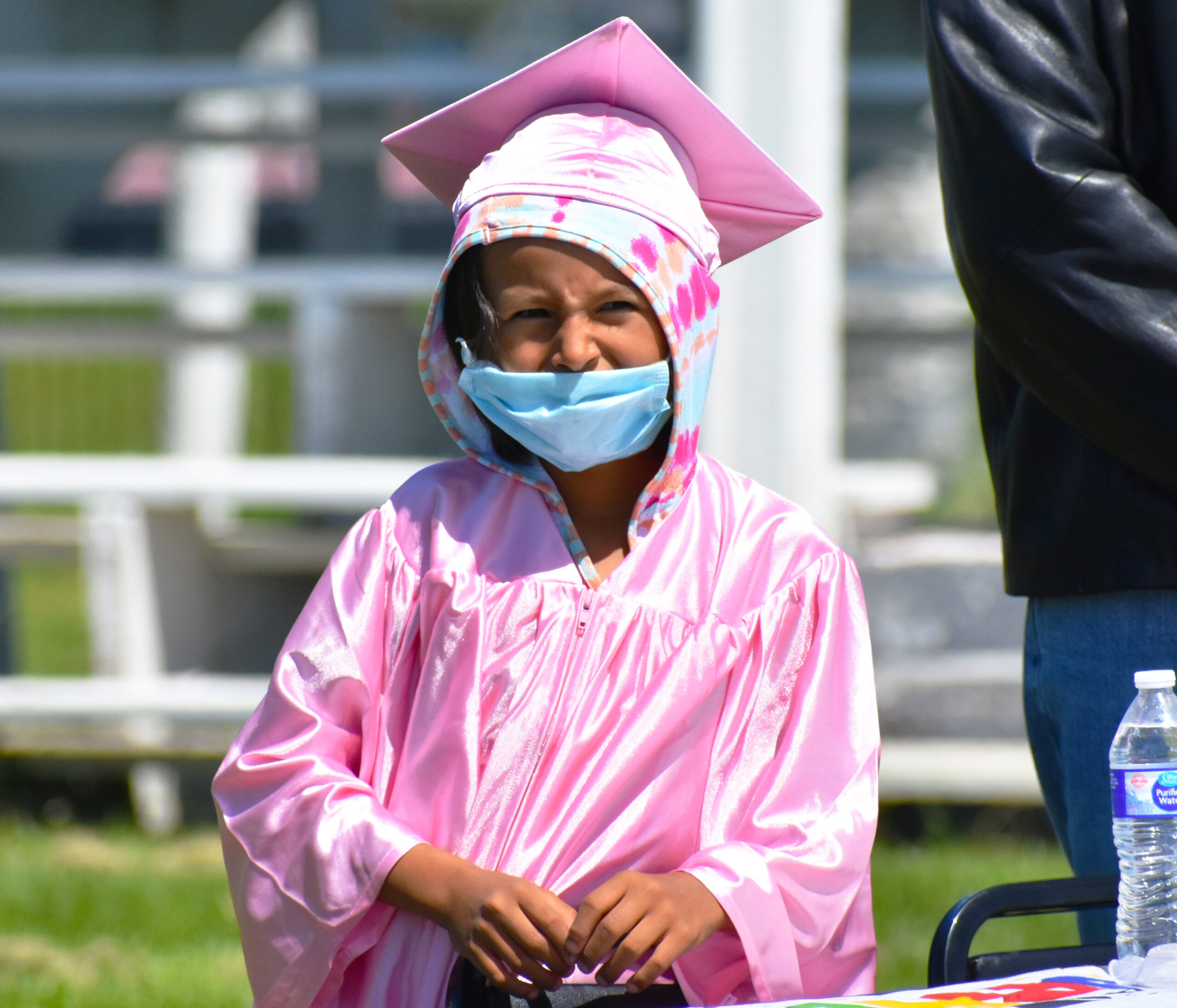 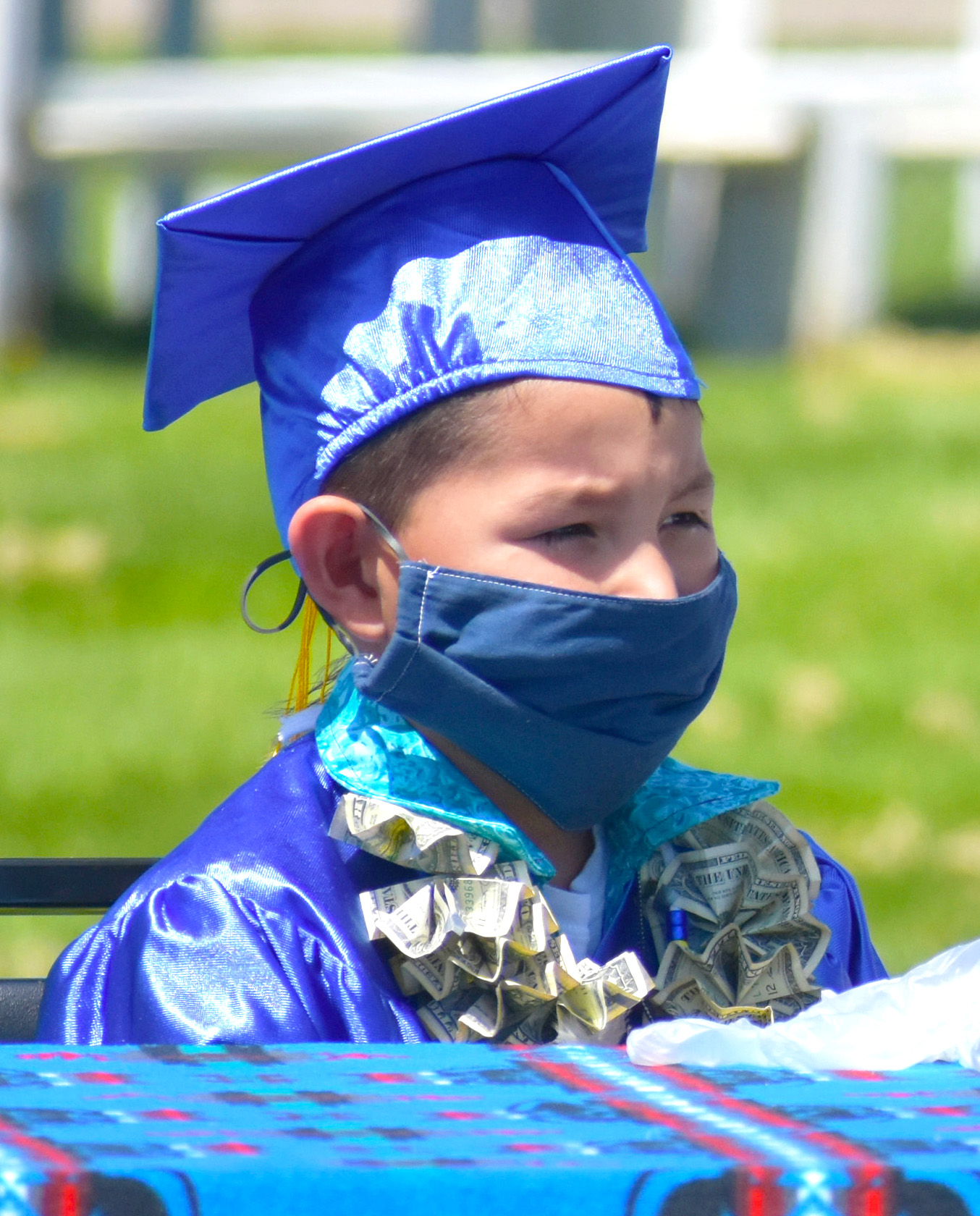 33 positive cases on CRST: Chairman Frazier’s daily noon updatePotential COVID-19 Exposure at Sitting Bull Stampede.BREAKING: Over 50% of positive individuals on CRST are under the age of 18
You have 2 more free access views left