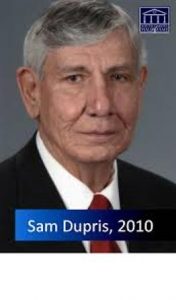 Our community is home to numerous irreplaceable elders and one such elder that we are blessed to have is Sam Dupris.

He was educated in both the Cheyenne River Agency Boarding School and the Catholic-run mission boarding school system before volunteering for the U.S. Army.

His service in the Korean Conflict earned him a Purple Heart and membership into the Lakota Warrior Red Feather Society.

After his honorable discharge, he chose to attend flight school which began his extensive career in aviation.

Dupris’s accolades are abundant, most notable being the first Native American to be a pilot for the Federal Aviation Administration, and his career has allowed him to travel the world.

At this point in his life, no one would blame Dupris if he simply enjoyed his retirement with his family and friends.

However, Dupris has a bigger dream for his retirement – to increase the number of Native Americans in the aviation industry.

For approximately 18 months, Dupris has been working to build a unique partnership between his Tribe, Cheyenne-Eagle Butte Schools, and regional post-secondary aviation programs.

SDSU’s Aviation team, along with Chairman Frazier and his staff, Katherine Campbell of the BIE’s Office of Research & Post-Secondary Education, Kim Olson of Senator Rounds Office, Jesse Ewing of Senator Thune’s Office, and the entire high school student body and staff will be in attendance at the opening assembly.

The assembly is designed to kick-off Aviation Days by providing the history of Dupris’s work as well as the short and long term goals he continues to work on in this partnership.

Following the assembly, the focus of Aviation Days will be two-fold with the SDSU Aviation crew splitting in half to serve students.

On campus, students will see aviation presentations, use a flight simulator, and have question and answer sessions with instructors and college students.

At the Eagle Butte airport, SDSU instructors and students will provide information sessions, airplane tours, and take students on flights.

Interested community members and students’ families are encouraged to attend the opening assembly on May 10th at 9:00 a.m. in C-EB’s Auditorium to learn more about careers in the aviation industry and the proposed partnership.