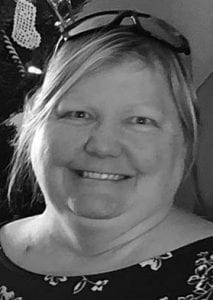 Peggy “Peg” Henson, 50, died Saturday, October 12, 2019 as the result of an automobile accident. Visitation will be on Wednesday, October 23, at 3:00pm, with a prayer service beginning at 5:00pm. Funeral service will be 1:00pm on Thursday, October 24th all at the Seventh Day Adventist Church, in Pierre, SD. Online condolences may be written at www.isburgfuneralchapel.com

Peg was born February 6, 1969 to Ruby Davis (Martin-Henson) and Alton Lee “Bill” Henson in Basin, WY. She grew up in Lovell, WY. After high school she attended community college in Wyoming before moving to South Dakota to attend SDSU. She graduated with a Bachelor of Science degree in FACS Education. Her first teaching job was in Hill City, SD, where she made some lifelong friends. She moved to the Pierre area and worked for the State of South Dakota Department of Education, Teaching TTL to educators all over the state was her passion. She taught 7 years at Eagle Butte High School and also taught college classes on the OLC campus in Eagle Butte as well as online courses for the Kyle Campus. She took her entrepreneur students to the Lakota Nation Invitational in Rapid City, where her students won college scholarships.

Peg loved life and dedicated her life to helping others. She was a lifelong educator and was always active in technical education. She was involved in SDACTE (South Dakota Association for Career and Technical Education), FCCLA Advisor, head class advisor and prom advisor. Peg will be remembered for her ability to motivate and encourage children. Everywhere she went someone knew her and stopped to visit. No one was a stranger to Peg. One of her biggest achievements is the Natural Helpers Group for youth. She also worked weekends at Missouri Shores Women’s Shelter as an advocate for women. Peg was an adjunct professor at Ogalala Lakota College, Eagle Butte Campus. She was also well known for her grant writing ability.

Peg was preceded in death by her parents, her brother Theodore “Ted” Martin, a sister Dora Dee Martin (stillbirth).