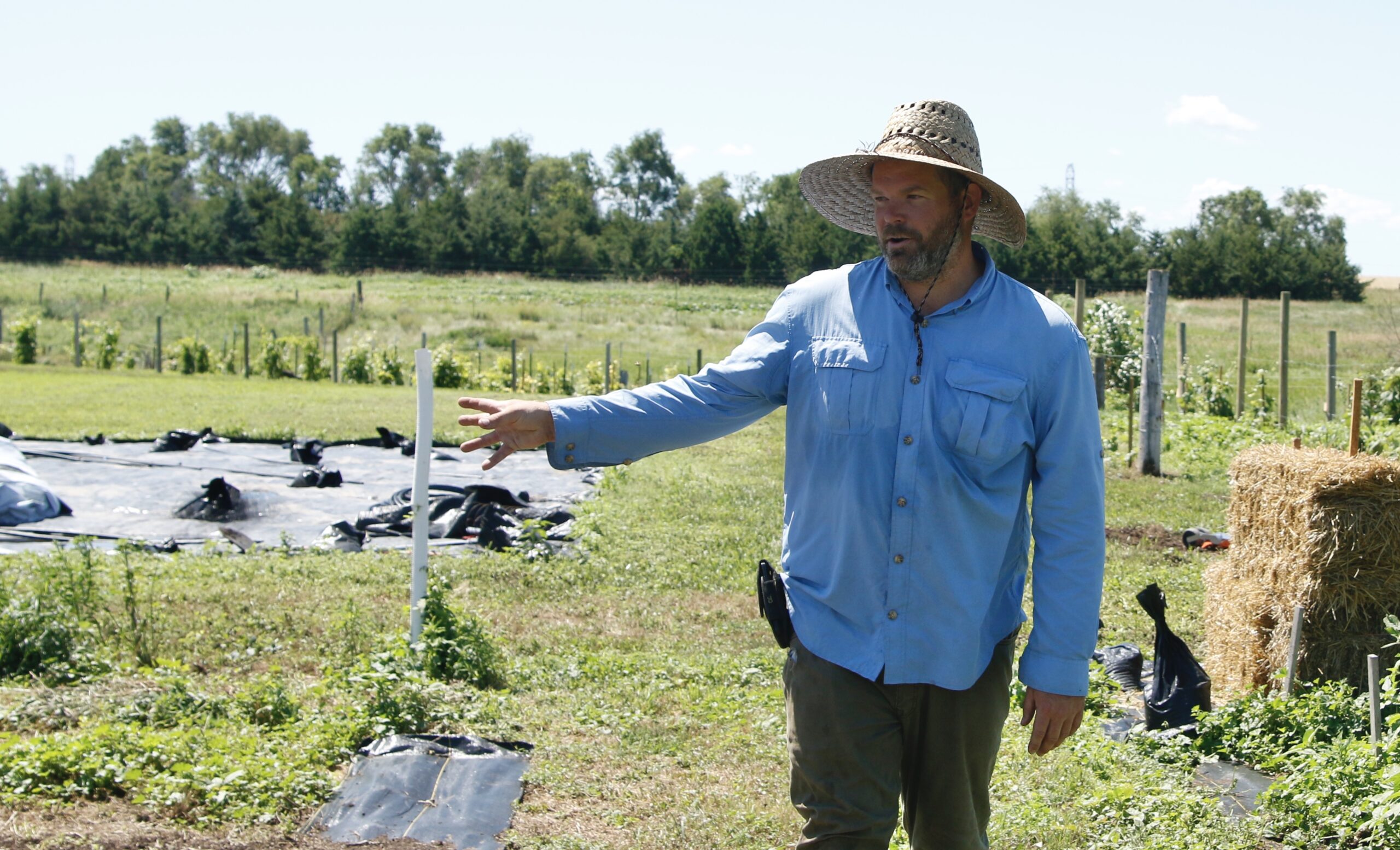 The COVID-19 pandemic and resulting fears over the stability of the American large-scale food production industry have pushed more consumers toward locally grown and raised meats and vegetables, and so far, South Dakota producers of homegrown foods have been unable to keep up.

Demand for locally grown food soared as consumers began to worry that fresh vegetables and meat would become scarce when the coronavirus caused outbreaks among meat-processing plants and farm workers.

Small-scale farmers who sell produce or livestock directly to consumers in South Dakota, such as Ian Caselli of Sioux Falls, have reported increases in sales of up to 25%.

Rhoda Burrows, a horticulture specialist with the South Dakota State University extension service, said many vegetable and fruit producers who sell directly to consumers around the state have reported hefty increases in sales.

National data also show that demand for locally produced food is growing and has been for years. About 167,000 farms were estimated to have made about $8.7 billion in sales within local markets nationwide in 2015, according to the USDA.

South Dakota has also seen growth in the number of small farms, Burrows said. Data from the 2017 USDA National Census of Agriculture show that while the number of larger, commodity-scale farms had shrunk since 2012, the number of farms that were 50 acres or smaller had increased.

“So, what we’re seeing is a switch from commodity-level, large-scale operations toward smaller-market, garden-type operations,” Burrows said.

South Dakota’s local growers say they were struggling to keep up with demand for their products before the pandemic. Restaurants were buying more fresh vegetables, eggs and meat from local producers because they were looking for better quality ingredients. Demand from everyday consumers has been steadily increasing as millions of Americans became more interested in where their food comes from.

Stephanie Peterson, treasurer for Dakota Rural Action, a nonprofit that advocates for local food producers, is a successful local food producer. Her business, Fruit of the Coop, is based on her family’s seven-acre farm near Brandon. She sells fresh eggs collected from pasture-raised hens to restaurants in Sioux Falls.

Peterson built her business from the ground up, often going directly to restaurants to demonstrate the quality of her eggs to chefs. Pasture-raised eggs have better nutritional value, brighter colored yolks and more flavor, all of which make them more popular with cooks at all levels.

Despite rising demand, local food producers face an uphill battle when it comes to starting new or growing. For one thing, their products tend to cost more than mass-produced vegetables, meat and poultry sold at most supermarkets.

Food safety regulations that small meat producers and processors must follow, meanwhile, are mostly aimed at large producers and place further restrictions on the supply of locally raised meat.

Both problems are evidence that the state’s local food infrastructure is badly out of date compared to other states and in need of more support from state government, Peterson said.

“We’re like 10 or 15 years behind most of the other states that have already done this,” she said.

Small producers also do not benefit from regulatory systems and taxpayer-backed programs that are built around supporting large-scale food producers and which were created to encourage cheaper, more efficient food production. Often, government action to help big crop and livestock farms has come at the detriment of small, local producers who can’t afford to comply with rules designed to keep multi-million dollar operations safe, said Peterson.

“The regulations that we have to follow as small producers are the same as a huge operation,” Peterson said. “I think we need to have some change in that. We need to kind of loosen the reins on some of that stuff, while still being safe.”

The limitations livestock producers face in what they’re allowed to sell directly to consumers might become a bigger issue during the pandemic for Michelle Grosek’s farm, Bear Butte Gardens, located east of Sturgis.

Grosek and her husband, Rick, own one of the few certified organic, grass-fed cattle herds in South Dakota that sells directly to consumers. Prior to the pandemic, selling steers directly to consumers was a reliable, steady source of income that supplemented the operation’s organic vegetable crop and poultry flocks.

Grosek said many people in western South Dakota are keenly interested in hormone-free, grain-free beef and lamb. The potential for meat shortages caused by COVID-19 has raised consumer interest in locally raised and processed meat, she said.

“Our business has definitely picked up,” Michelle Grosek said. “It brought this awareness that hamburger might not always be available in mass quantities at the grocery store.”

Under state and federal food safety laws, it is illegal for Bear Butte Gardens to sell an individual cut of meat, such as a T-bone steak, directly to a consumer unless the cut is made at a processing plant inspected by the state or federal government. Having a butcher cut up unsold meat is a risk and can get expensive for a producer already working on thin margins. To keep costs down, the Groseks only sell half, quarter or whole shares of live animals to their customers. Once an animal reaches its finished weight, the Groseks deliver it to a local butcher who processes each share according to a shareholder’s wishes.

Another big challenge facing local food growers is that there is very little support for their efforts at the state level, Peterson said.

South Dakota state government does not have programs aimed at supporting small, direct-to-consumer farms before or during the pandemic, said Natalie Likness, media relations coordinator for the Governor’s Office of Economic Development.

Local producers, such as Peterson, have largely been shut out of federal coronavirus relief efforts. In Peterson’s case, the restaurant trade virtually disappeared overnight, so she had to scramble to find new ways to sell eggs, including at liquor stores.

Farmers markets, one the biggest points of sale for many small-scale vegetable and fruit growers, have also taken a big hit during the pandemic.

Some producers such as Cedar Creek Gardens of Midland, S.D., decided to forego farmers markets altogether and set up farm stands instead, co-owner Peggy Martin said.

“There’s just a lot of stress because you put your heart and soul into growing this stuff,” Martin said. “You’re wondering how you get it to somebody in a safe manner without endangering yourself and then your business, because farmers markets are a huge part of how you sell. ”

Matt Garaets, co-owner of B & G Produce, located 20 miles east of Pierre, said the weekly Capital City Farmers’ Market used to be one of his farm’s biggest sources of income. But during the pandemic, he has brought less product to the market and has actively pushed customers toward placing pre-orders online.

Matt and his wife, Lindy, both grew up in Pierre but spent years living in larger cities with well-established local food systems. They wanted to bring the concept to their hometown when they moved back about a dozen years ago. The problem was that in Pierre at the time, there weren’t many locals growing enough vegetables to sell.

So, the Garaets started planting a mixed vegetable crop on three acres of land between the shelter belts surrounding Lindy’s parents’ farmhouse. Soon after, they helped found the Capital City Farmer’s Market in Pierre.

Garaets has also been able to cultivate wholesale agreements with the Dakotamart grocery store in Pierre and with local restaurants to help keep up his sales and income.

Still, he gets better prices for his products when selling at the Capital City Farmer’s Market and said he hopes to continue selling at the market. Throughout the market’s decade-plus existence, there has been no shortage of demand for fresh produce, Garaets said, only a shortage of supply.