On scene with the C-EB Upper Elementary Newspaper Club

On Tuesday, October 29, 2019 the after school archery team had a bake sale to help raise funds for traveling and uniform money. The fundraiser took place at the Upper Elementary gym lobby during the volleyball game.  The goal is to raise more money to get more equipment. Every Monday is hat day. Pay a $1 to wear a hat. The people who helped at the archery fundraiser are Dexter Hawk Eagle, Aniyah Adams, Eason Fisher, Ransom Martin, Kael Dupris, Julietta Skinner, Gabrielle Dupris, Coach Joens, Coach Anderson, and Coach Martin. 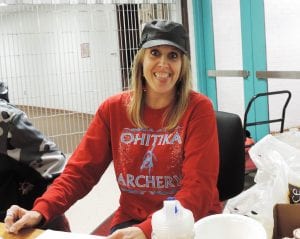 Anna Lewis from the Discovery Center in Pierre, SD came to the Upper Elementary to teach fifth grade students about terrariums. They learned that soil is not just “dirt”, instead, it is a living “coat” on the earth. Soil has nutrients, bugs, leaves, pebbles, roots, and water. Groups of four students worked together to make their own terrarium habitats. To build their terrarium, they used a clear plastic container with a lid. First they filled it 1/3 full with soil and added twigs, bark, grass seeds, and moss. Next they added worms and roly poly bugs, also known as pill bugs. Then they watered their habitats. A few days later they found grass growing and bugs crawling around. The students had fun.

By Abrielle RedDog and Rylee Miner 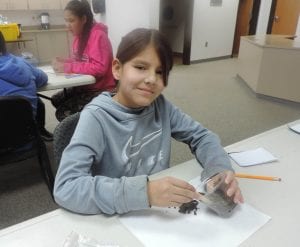