The tournament took place from April 13-14, and over 3000 archers competed from across the western United States, and included schools from as far away as Alaska, Texas, and Washington.

Some archers wore their NASP Academic Archer patch, which they received for maintaining an excellent academic standing throughout the archery season.

The entire team wore a patch of the Cheyenne River Sioux Tribal flag on their left shoulder, and was the only Indian school that 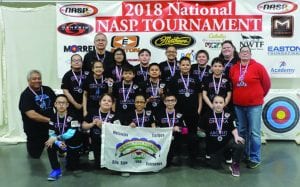 competed at the tournament.

The Ohitika elementary team placed 2nd overall in the 3-D Challenge and 4th overall in the Bullseye Challenge, and took home a trophy. Each archer was presented with a medal.

Fifth grader Jhoni Uses Many placed 5th overall in her division, and was presented with a plaque and a medal for her individual archery achievements.

This year was the first time that the NASP National Tournament was split into two competitions and regions, Western and Eastern.

Top scorers from both tournaments will be compete at the 2018 NASP World Championships, which will take place this June in Louisville, KY.

By claiming 2nd place at the Western National tournament, the elementary Ohitika team qualified to compete at the World Championships.

Elementary Team in both Bullseye & 3D