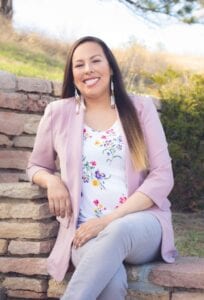 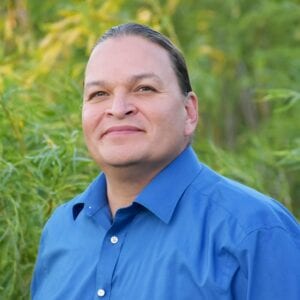 PHOTO COURTESY OF THE SOUTH DAKOTA DEMOCRATIC PARTY Remi Bald Eagle is Mnicoujou Lakota and is a member of the Oceti Sakowin Caucus. He is a former Democratic candidate for South Dakota Public Utilities Commissioner and currently serves as the Cheyenne River Sioux Tribe Intergovernmental Affairs Coordinator.

The Oceti Sakowin Caucus of South Dakota is building the foundations to create a powerhouse for indigenous outreach, civic engagement, and a culture of voting. Earlier this year, the caucus formally changed its name from the Native Caucus to the Oceti Sakowin Caucus of South Dakota to reflect the indigenous identity within the state Democratic Party. Oceti Sakowin means “Seven Council Fires” and refers collectively to the Lakota, Dakota and Nakota people. Part of the caucus’ rebranding includes the creation of a new logo that incorporates cultural symbolism and spirituality.

Additionally, the caucus is creating a weekly speaker series which will feature guest keynotes from diverse backgrounds, industries, and specialties. The series will concentrate on improving Native lives, increasing political participation and activism, and creating a network for partnership and community. The series will kick off the first week of April and will feature Democratic legislators and various leaders from the state.

Another key element within the caucus is the creation of workgroups that is composed of volunteers who will work on a variety of issues to include a monthly newsletter, funding opportunities, candidate and voter recruitment and rebranding. Volunteers are vital to the success of the caucus and are always welcomed to participate.

The Oceti Sakowin Caucus acknowledges that indigenous people have not always been welcomed and included within the political systems that impact their lives, families and communities. The lack of inclusion, combined with the historical trauma and mistrust of colonial government has resulted in a culture of choosing not to vote and not to participate in state and federal politics.

The Oceti Sakowin Caucus also understands that in order for progressive and decolonized change to occur, voting and civic engagement from indigenous nations must be a part of our strategy. When we mobilize, organize, and act, we are tackling long-standing systemic inequalities in education, healthcare, housing, wealth, and employment.

Your voice, active participation and action are needed and welcomed in the Oceti Sakowin Caucus. Together, our collective effort will bring to fruition the prayers of our ancestors and the mission of the South Dakota Democratic Party platform which advocates for:

• Tribal governments’ authority to self-govern their lands and members.

• Regular meaningful and fair consultation between tribal, state and federal officials regarding culture, health, economics, education, and other issues; including protection of water, air, land, animals, people, and sacred sites.

• Native language and cultural practice preservation, use, and revitalization in all communities in South Dakota, including ceremonies.

• A treaty obligated, fully funded healthcare system in Tribal Nations that is respectful of culturally appropriate alternative medicines and practices and includes access to professional mental and substance abuse counseling and preventative and diagnostic health care.

• Food sovereignty for appropriate nutrition based on cultural identity among the Očeti Šakowin people.

• A vigorous education model for all students that teaches an accurate representation of the Očeti Šakowin people, language, culture, and practices, including the effects of historical trauma.

• Ease of access to voting, including registration, voting centers, and absentee ballots.

• Development and maintenance of infrastructure on Reservations, including WIFI, roads and bridges, affordable housing, and quality drinking water.

• Funding and education to minimize and eliminate domestic violence and to prevent missing and murdered indigenous women, girls, and people and to track those lost.

The caucus’ mission is to invest in and develop the voting power of Native people and to create a culture of intergenerational voting and civic engagement.

“I am really proud of the Oceti Sakowin Caucus of South Dakota. We are here to uplift indigenous voices and prioritize the Native vote in South Dakota,” said Cante Heart, SDDP Native Outreach Coordinator.

“The caucus is very important and gives a space for Tribal members in the South Dakota Democratic Party. It also gives Tribal members a voice in the decisions that the party makes, and helps facilitate responsible legislative choices by providing input from an indigenous perspective,” said Remi Bald Eagle, caucus member.

The next virtual caucus meeting is scheduled for this Thursday, April 1, at 5:30 p.m. MST. Contact Cante Heart at cante@sddp.org to register.