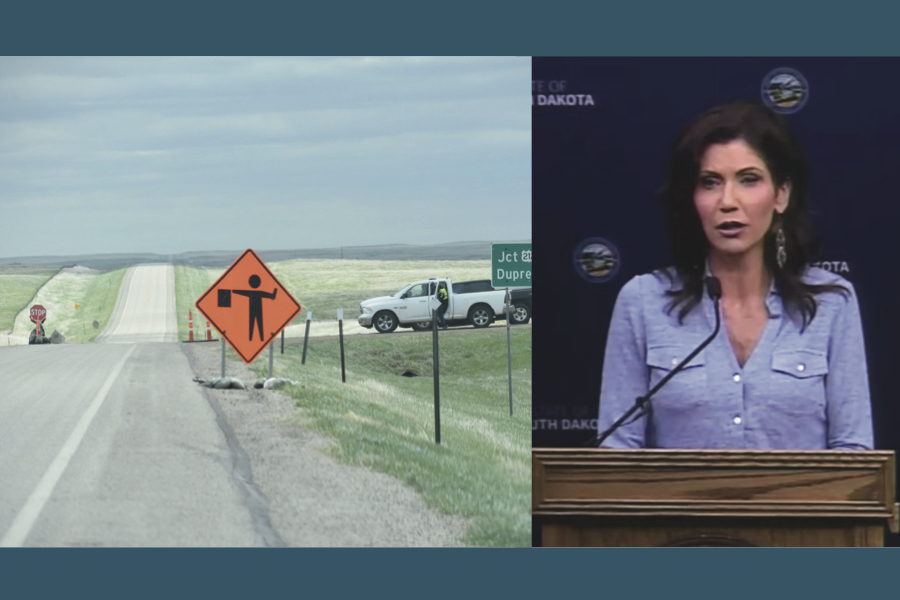 In her press conference today, Governor Kristi Noem said the state has collected and turned over to the federal government affidavits and videos of the “unlawful” checkpoints set up by the Cheyenne River Sioux Tribe.

“Despite weeks of attempts to start a conversation and to find a solution between me, Secretary Flute and many others to resolve this matter informally, of finding a solution that would respect tribal sovereignty, also state sovereignty and federal law, the tribes have continued to maintain these checkpoints on US and state highways,” said Noem.

On May 8, the governor sent a letter to CRST Chairman Harold Frazier demanding that the Tribe remove all checkpoints 48 hours or face legal action.

The next day, 17 state legislators sent a bipartisan letter to Noem stating that the State does not have authority to enforce State law within the boundaries of a Reservation. The congressmen also criticized the governor’s actions as confrontational, demanding, and causing a constitutional crisis.

Furthermore, the legislators cited the 1990 8th Circuit Court of Appeals which held the State of South Dakota has no jurisdiction over the highways running through Indian lands in the state without tribal consent.

In her letter to President Donald Trump dated May 20, Noem writes, “This, however, is not simply a matter between a sovereign state and a sovereign tribal government. Rather, the federal government has an interstate in interstate commerce, transportation of critical infrastructure goods, provision of services from critical infrastructure industries, and the uniform treatment of all travelers on a non-discriminatory basis.”

“This, however, is not simply a matter between a sovereign state and a sovereign tribal government.” -Governor Kristi Noem

She continues, “As a final alternative to formal litigation, I’m asking for immediate federal assistance to: (a) bring a prompt end to these unlawful tribal checkpoints/blockades on US/State highways: and (b) require the CRST to comply with the procedures set forth in the BIA Memo.”

Enclosed in the letter to Trump were affidavits from Wade Eastman, Tracy Eichler, David Martin, Brandon McCarthy, and Tyler Neuharth.

Noem said the investigation is ongoing.

The governor referred to the site in her briefing, “I invite everybody to go to covid.sd.gov to review all the easements that are in place granting us the right to put these roads where they are. These are easements that the tribe did agree to, and the legal documentation is there showing that these checkpoints cannot lawfully be on US and State highways.”

The governor cited, and the documentation includes, easement agreements between the State of South Dakota and CRST for specific road construction projects from 1956, 1961, 1973, 1993, 2001,

Noem has objected to the health checkpoints since the beginning of May, despite the fact they have proven effective in tracking and containing the spread of the coronavirus, as evidenced by the Tribe’s quick ability to begin contact tracing using information gathered by a checkpoint deputy when their first and only positive COVID-19 case was reported on April 29.

Today the Governor upped the ante, saying “I asked the South Dakota Attorney General to order an investigation into these checkpoints, and that investigation, while it’s still ongoing, has produced both affidavits and video recordings of these unlawful checkpoints that are in place.”

The documentation sent to the governmental entities includes a letter to the Secretary of the Interior dated April 23 which states the “policy at the checkpoints that goes beyond all reasonable measures to protect tribal members from COVID-19.” The letter cites examples where traffic was impeded in April.

The governor has long held that the public health checkpoints restrict essential services, do not allow supplies and mail and package services access to the reservation, and prevent ranchers from access to their lands and cattle.

Tribal checkpoint policy is to allow all essential services access to reservation lands, and to require a travel permit for individuals on and off the reservation.

When asked if she expects the White House, the Departments of Justice and Interior, or the Congressional delegation to side with her in this scuffle with the tribes, Noem replied, “This isn’t taking sides. This is just simply upholding the law. And the Department of Justice has jurisdiction here. We’re asking them to do their jobs, and also asking for the help and partnership of the White House and our congressional delegation to encourage them to do so.”

The Cheyenne River Sioux Tribe has yet to release a statement regarding these new developments. This is a developing story and we will update it when more information is available. 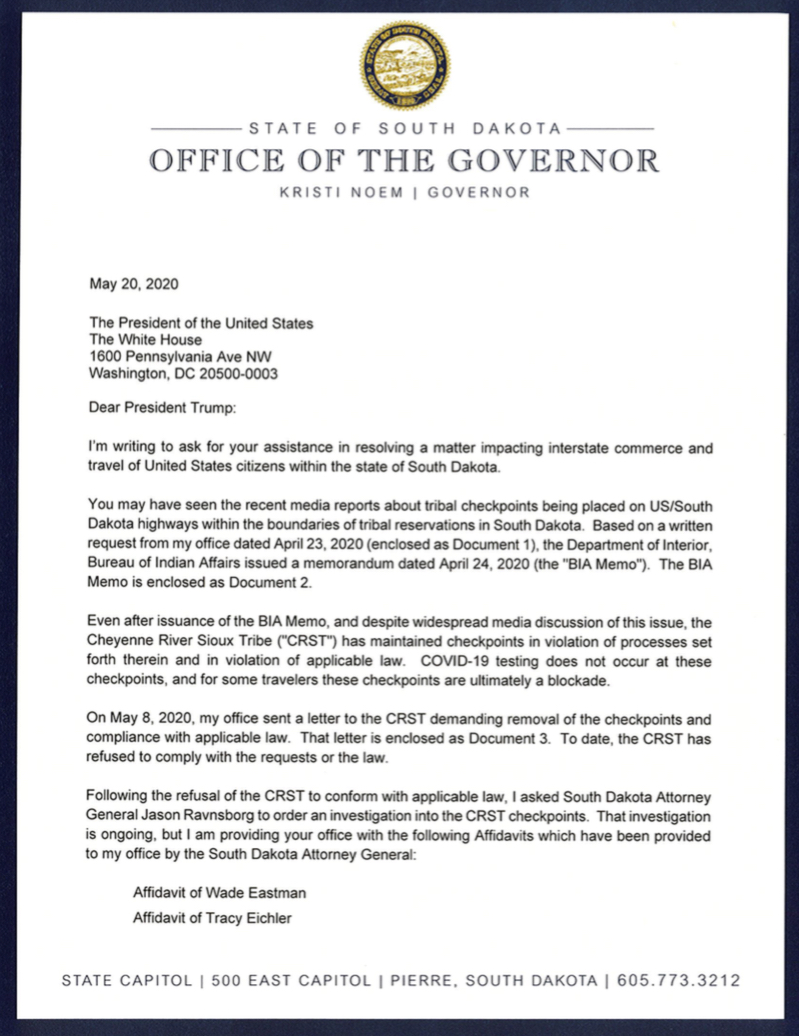 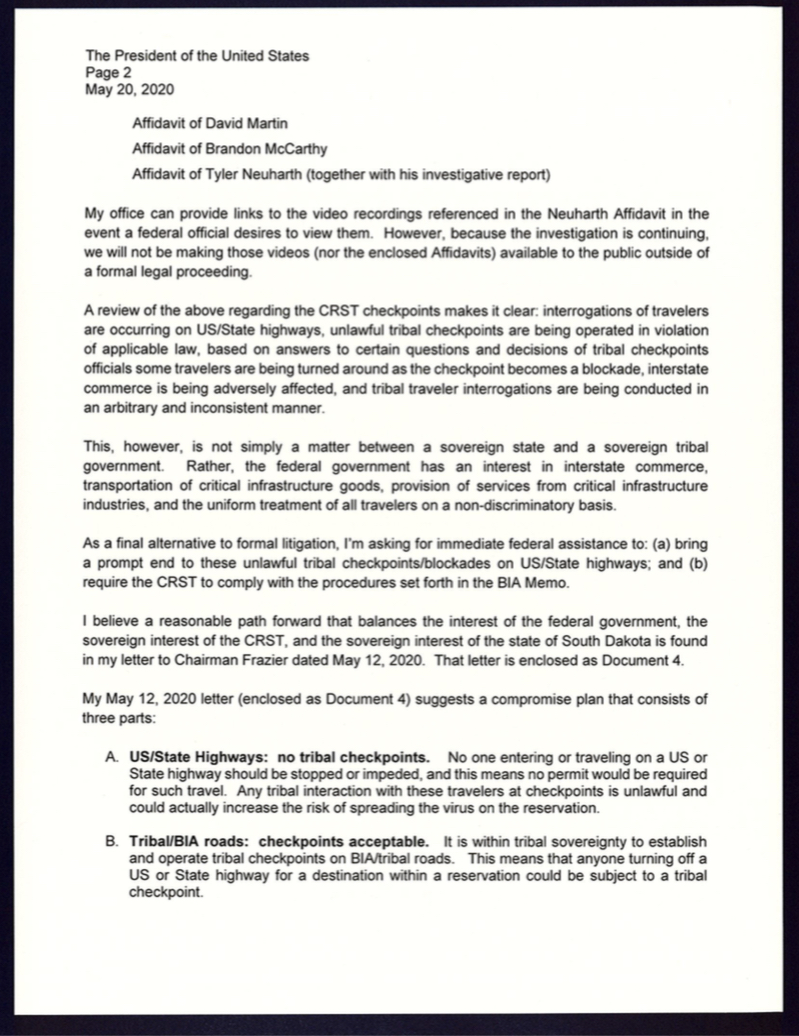 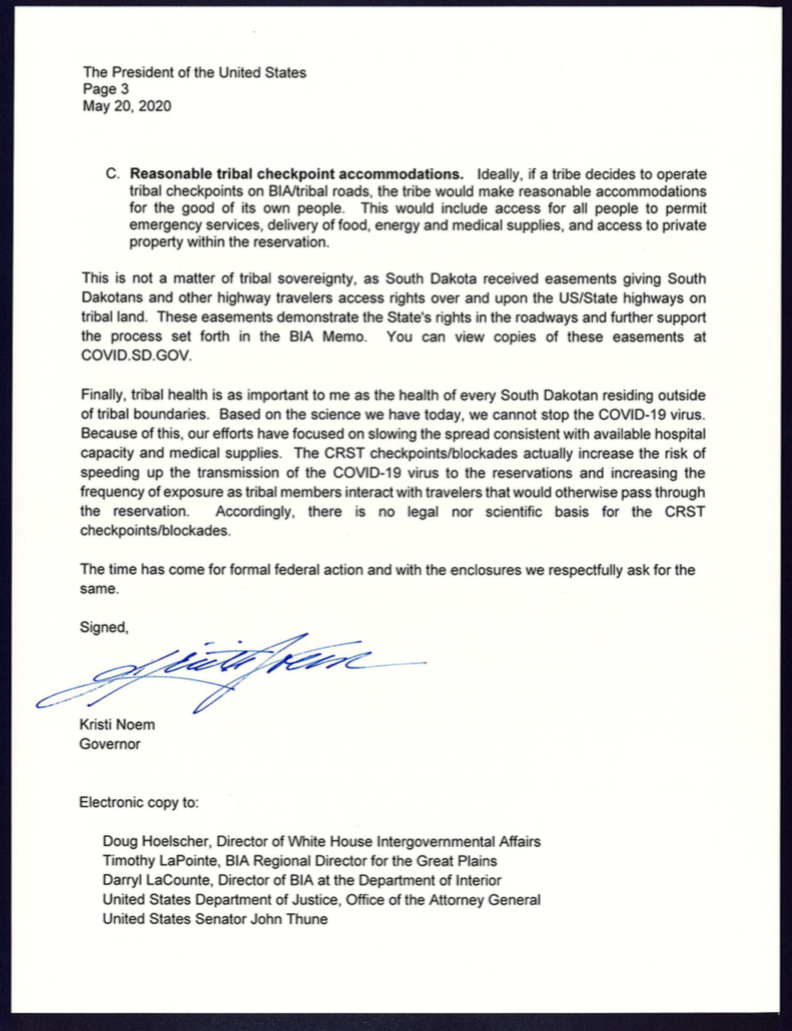 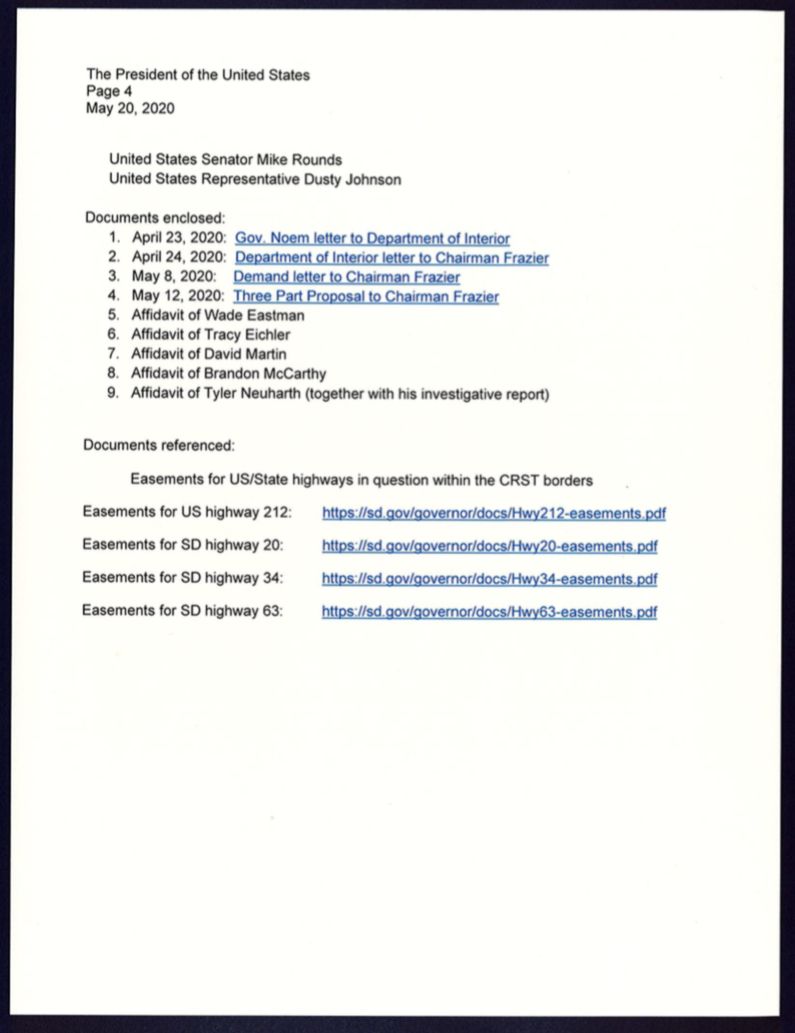