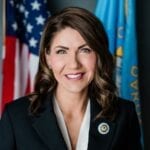 South Dakota governor Kristi Noem delivered her third State of the State address on January 12, 2021. She spoke in a climate of national crisis after an attempted coup of the national government by pro-Trump extremists last Wednesday.

Noem spoke to a joint session of the South Dakota legislature. Many but not all of those in attendance wore masks. Noem did not and greeted the crowd with handshakes and hugs. She spoke from behind a plexiglass barrier.

Lieutenant Governor Larry Rhoden introduced Noem with praise for her leadership in taking South Dakota down a different path from the rest of the country in the coronavirus pandemic.

“Over the past several months as the politicians in other states were implementing one-size-fits-all policies, Governor Noem took South Dakota down a unique path and our state is in a tremendous position as a result. Governor Noem has bucked the status quo and rejected disastrous shutdowns. Instead, she chose to trust the people of South Dakota to make smart decisions for themselves.”

This emphasis on making smart decisions came into play later in Noem’s comments. Rhoden said the state is safer, stronger and healthier as a result of Noem’s leadership.

Noem opened by saying the state met adversity head on in 2021. She spoke of the coronavirus pandemic in the past tense, saying people, “lost loved ones and their livelihoods were threatened.”

Noem established the theme for her address right off the bat, saying she and all the elected officials in the room work for the people of South Dakota and “respect the rights of our people to live their lives.”

In the economic section of the speech, Noem spoke about people coming to South Dakota because of its lack of regulation and coronavirus restrictions. She offered statistics about new business in the state, particularly a $500 million investment from Schwan’s and CJ Foods to build a new facility in Sioux Falls.

Noem moved on from state-wide economics to creating opportunities for families and community growth. She said, “Strong families have always been the backbone of South Dakota,” and followed the comment with a quote from Ronald Reagan. Reagan said, “Our families nurture, preserve, and pass on to each succeeding generation the values we share and cherish, values that are the foundation for our freedoms.”

In light of the attack on the capitol last week, it is important to understand that these themes reflect structural racism. Historically, succeeding generations were able to thrive because of red-lining, preferential lending practices and, in South Dakota, the lack of an inheritance tax.

Noem went on to align strong families with abortion prevention laws. She highlighted two families who have children with Down syndrome. Both families were in attendance. The camera panned to the grouping in the gallery. There were fifteen people, none were masked and some were children in arms.

Noem used these families to announce her intention to ask the South Dakota legislature to pass a law specifically to ban the termination of pregnancies due to Down syndrome. She went on to say, “Let’s make South Dakota a symbol of hope, justice, and love for children.”

She took issue with countries such as Iceland and Denmark whose numbers of children born with Down syndrome are decreasing. She said, “They do this one way and one way only: through abortion.”

She said South Dakotans should be appalled, and criticized the freedom exercised by other families to make decisions for themselves, the very right she praised earlier when saying South Dakotans can be trusted to make smart decisions without government intervention.

After a section on abortion and families, Noem moved on to talk about the need for high-speed broadband internet access across the state. She gave examples of people moving to South Dakota to take advantage the impact of the pandemic, and offered examples of professionals who came to South Dakota in 2020 so they could work where they want to live instead of living where they need to work.

In a perfect example of economic policy that balances capitalism and democratic socialism, Noem called for state investment coupled with industry funding and federal grants to, “get the job done.” She said, “Success would mean our rural communities would have the opportunity to grow, and families would have the chance to stay together.”

Noem went on to talk about the rising rates of home ownership and home construction in South Dakota, saying sales are up and construction is up 10% from a year ago. She attributed the increase to the state’s response to the pandemic.

“States that shut down their economies are now looking at tax increases or drastic spending cuts to make ends meet. We made different choices than virtually any other state over the past year. To be fair, I never once thought the decisions we were making in South Dakota during the pandemic would be unique. But other states based a lot of their decisions on fear and emotion, and now they’re seeing the results of that. In South Dakota, we do not make policy out of fear. We prepare for the worst but always remain optimistic that the best is yet to come.”

Her discussion of home sales led to comments on the state’s largest industry, agriculture. Again, showing a balanced approach to free-market capitalism and effective democratic socialist economic policy, she touted changes to the state’s permitting processes, grants to meat processing plants, state-sponsored investment in the Dakota Events Complex, the creation of a program to increase the ability of meat producers to go to market, and the merger of the Departments of Agriculture and Environment and Natural Resourced. “Each of these items will help reinvigorate our number one industry – and all the families it serves — for many years to come,” she said.

Noem closed her comments with praise for the medical professionals who have labored through the pandemic. She highlighted a program to treat high-risk patients at home when the hospitals could not handle the influx of patients due to the rampage of the virus. She spoke about substance abuse, with a particular focus on its impact in tribal communities, saying “The state stands ready to work with our tribes and all South Dakota communities to combat substance abuse.”

Winding down, she sounded the familiar theme to get kids to “put down the X-box and pick up the tackle box,” saying over 8 million people visited South Dakota parks in 2020 and there was an increase in hunting permits to youth and first-time hunters are more people took advantage of the outdoors during the pandemic.

Noem closed by offering a solution to the political divisions in America in the form of a state-sponsored civics education program. She said, “I have tasked my administration with creating instructional materials and classroom resources on America’s founding, our nation’s history, and the state’s history. We must also do a better job educating teachers on these three subjects. Through all of this, our common mission and key objective needs to be explaining why the United States of America is the most special nation in the history of the world.”