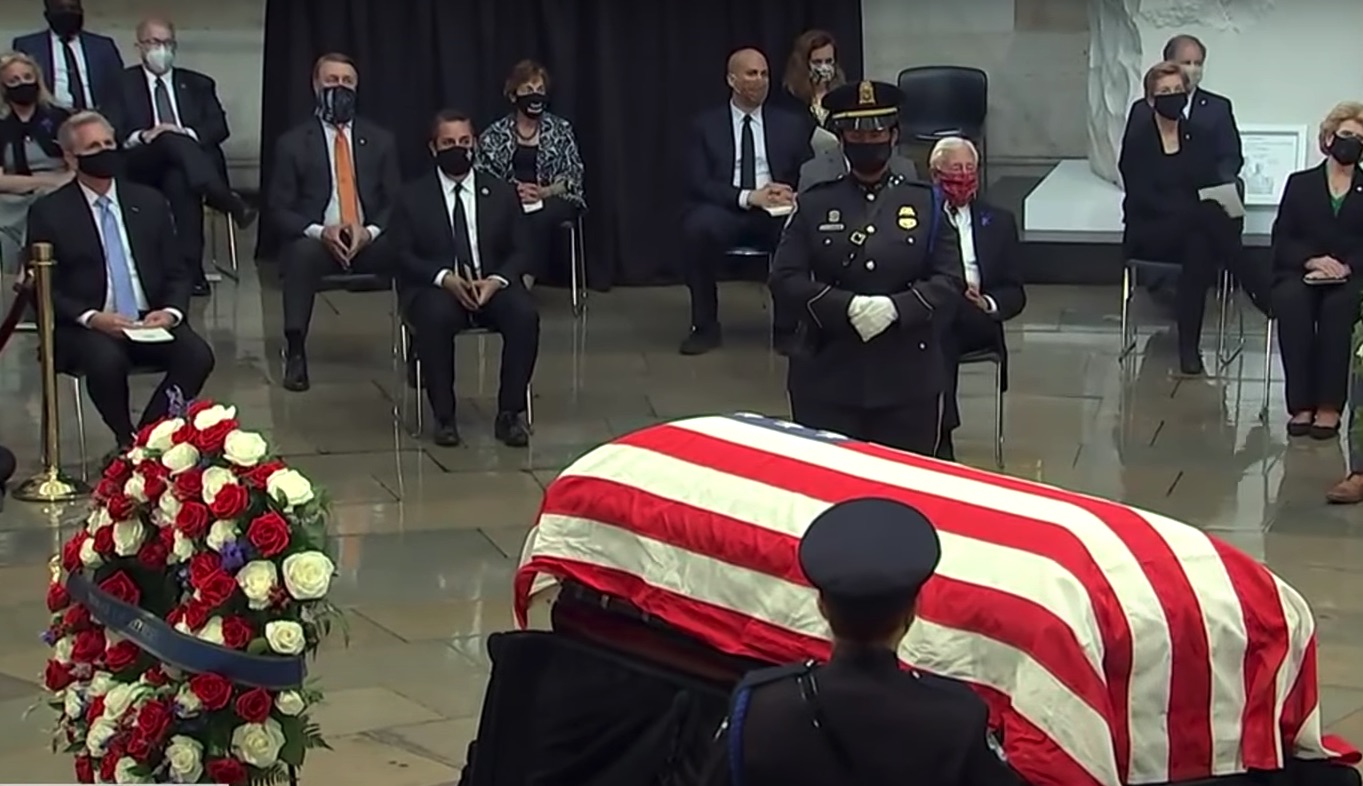 SCREENSHOT FROM CNN
The casket of Congressman John Lewis is protected by the honor guard as he Lies In State in the US Capitol Rotunda. Lewis passed away July 17 after battling cancer.

John Lewis, known as the “Conscious of Congress”, was memorialized and remembered in a six-day honoring beginning on Saturday in his hometown of Troy, Alabama.

On Monday, July 27, Lewis’ casket arrived in Washington DC as his funeral procession prompted DC street closures. Lewis’ body was taken to the US Capitol Rotunda to Lie in State, only the second time a black US lawmaker was honored in this matter.

Lewis is remembered as “one of the most courageous persons the Civil Rights Movement ever produced” and as a person who dedicated his life to protecting human rights and securing civil liberties for all Americans.

The son of sharecroppers, Lewis was trained as a Baptist minister and got involved in the growing the Civil Rights movement first through the Nashville Student Movement. He pushed people to get involved in “good trouble” with protests and sit-ins. Later he gained more notoriety as one of the 13 original Freedom Riders.

In 1963 he was one of the organizers for the March on Washington which was culminated by the “I Have a Dream” speech by Rev. Martin Luther King Jr.

In 1964 Lewis led the Selma to Montgomery march and after crossing the Edmund Pettus Bridge in Selma, Alabama, marchers were met by Alabama State Troopers who attacked the non-violent protestors.

The event is remembered as “Bloody Sunday”. The brutal images from that day helped usher in the Voting Rights of 1965.

Despite numerous injuries from beatings and over 40 arrests, Lewis continued in his work for Civil Rights. In 1966 he began to work for the Field Foundation for about a year before returning home to Atlanta.

After this he began to work in government on both national and local levels, including time spent in the Atlanta city council. In 1986 he was elected to the United States House of Representatives where he served until his death.

Lewis was also an award-winning author, with several books published. His 1998 autobiography, Walking with the Wind: a Memoir of the Movement won the Robert F. Kennedy Book Award and others. In 2013, the first part of his three-part graphic novel March was published. This also won a Robert F. Kennedy Book Award, as well as a Coretta Scott King Book Award. The other two volumes came out in 2015 and 2016, also winning accolades and awards.

In his 2017 book, Across that Bridge: a Vision for Change and the Future of America, he wrote, “Freedom is not a state; it is an act. It is not some enchanted garden perched high on a distant plateau where we can finally sit down and rest. Freedom is the continuous action we all must take, and each generation must do its part to create an even more fair, more just society.”

In his personal life, he won numerous awards, including the Presidential Medal of Freedom given to him by President Barack Obama, the Lincoln Medal from the historic Ford’s Theatre, the Martin Luther King, Jr. Non-Violent Peace Prize, the NAACP Spingarn Medal, and the only John F. Kennedy “Profile in Courage Award” for Lifetime Achievement ever granted by the John F. Kennedy Library Foundation, as well as over 50 honorary degrees.

On March 1 of this year, speaking from atop the Edmund Pettus Bridge, Lewis said, “Get into good trouble, necessary trouble, and help redeem the soul of America.”

After his death, his casket was taken over the Edmund Pettus Bridge before being flown to Washington DC where he lay in state for two days before his burial. On the way from Joint Base Andrews, his procession stopped at Black Lives Matter Plaza where his son was presented with a street sign. His son stood by a mural where his father had spoken at on June 7, during which he called the various murals and yellow painted words “a powerful work of art”.

“John was revered and beloved on both sides of the aisle…God truly blessed America with the life and leadership of John Lewis,” said House Speaker Nancy Pelosi.