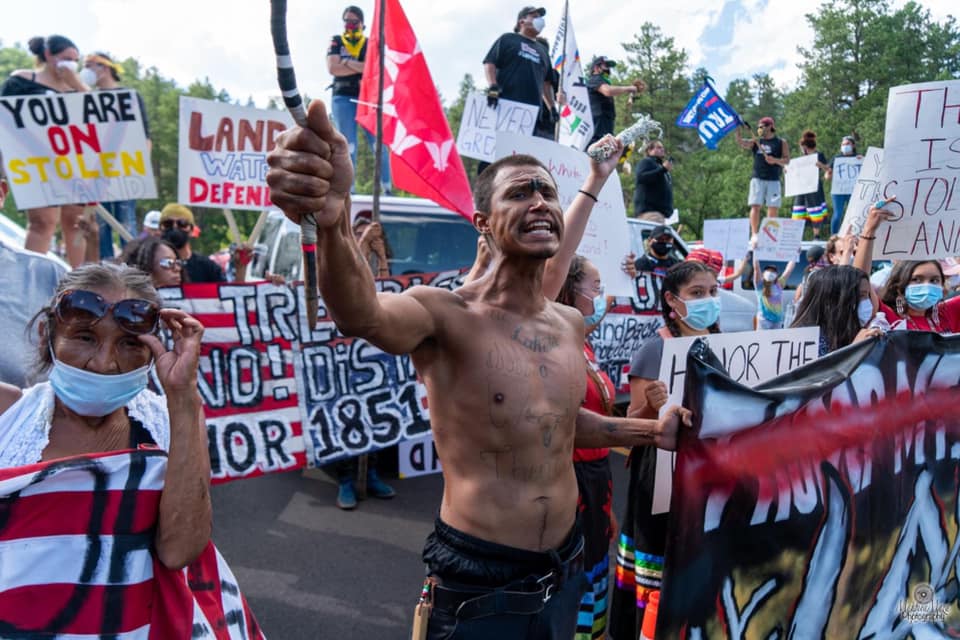 Republican luminaries gathered at Mount Rushmore on Friday for a celebration of the Fourth of July which layered patriotism over protest and American exceptionalism over Indigenous sovereignty.

The event encapsulated the conflict of cultures and national identities in 21st century America. Mount Rushmore emerged as a powerful national symbol in the wake of the killing of George Floyd in May and the Trump rally in Tulsa, Oklahoma in June which coincided with the celebration of Juneteenth. The celebration of the Fourth of July took place at the “Shrine of Democracy” built on treaty land belonging to the Great Sioux Nation and illegally occupied by the United States since 1874.

In contrast, current Native leaders have called for the monument to be destroyed while Noem has defended it, saying it would not be desecrated, “Not on my watch.”

Cheyenne River Sioux Tribe Chairman Harold Frazier said in a statement leading up to the event that “This brand on our flesh needs to be removed and I am willing to do it free of charge to the United States, by myself if I must.” He concluded, “When I can remove those faces from our land I believe I would not be alone.”

From there the party made its way to Mount Rushmore by helicopter for a second flyover.

Events at the park included the U.S. Air Force pop band Pegasus and U.S. Air Force Academy Concert Band who performed to the 7,500 attendees in the outdoor auditorium, many of whom waved Trump flags and homemade signs. A Teddy Roosevelt reenactor spoke and mingled with the crowd. Roosevelt is famously quoted as saying, “The only good Indians are the dead Indians.” This appearance was followed by hoop dancing and Native storytelling by three Indigenous performers who were later faced backlash on social media for their participation in the cultural exchange.

Near Keystone, a group of protestors gathered alongside Iron Mountain Road and peacefully protested as fireworks ticketholders drove past. Protesters carried signs, chanted slogans, burned sage, drummed and prayed in support of water rights, the return of treaty lands and decolonization.

After 5 p.m., a group of protestors parked vans across the road, creating a blockade that prevented access from Keystone to the Mount Rushmore National Monument. Two of the vans had at least one tire removed by protesters so the vans could not be easily moved, reported the Pennington County Sheriff’s Office (PCSO).

The South Dakota National Guard arrived on scene with shields. Together with law enforcement, they surrounded the protestors and a clash erupted. According to the PCSO, pepper spray and pepper balls were deployed by law enforcement.

21 people were arrested, including NDN Collective leader Nik Tilsen and a counter protestor from Arizona.

Tilsen summed up the goals of protesters stating, “Our people have fought for this land and we will continue to. This won’t be the last. Our goal isn’t just to resist, but to radically imagine a better future.”

In Keystone, Rapid City resident Mike Harris, a registered Republican, had been protesting Trump since Tuesday. He protested against the president’s response to the coronavirus pandemic and for environmental concerns about the fireworks display.

A show of unity and family

Republican leadership made a strong showing of unity and family. Noem’s family attended along with Rep. Dusty Johnson (R-SD). Senators Mike Rounds (R-SD) and John Thune (R-SD) and Secretary of the Interior David Bernhardt and his family had seats on the dais as well.

Speeches by Bernhardt, Noem and Trump followed a consistent theme of rejecting reinterpretation of monuments and preservation of American cultural identity.

Bernhardt opened the evening program after an introduction by Hart. He noted that “Few places are more central to the collective American identity than Mount Rushmore.”

Noem kept to the theme in her comments and plunged into the national debate saying, “Across America, these last several weeks we have been witnessing a very troubling situation unfold. In real time we are watching and organized, coordinated campaign to remove and eliminate all references to our nation’s founding and many other points in our history.”

Trump’s speech masterfully deflected responsibility for current political and racial conflicts away from the mostly-white crowd. He accused left-wing fascists of threatening liberty and overthrowing the American Revolution. The audience responded with calls of “Four more years!” and chants of “USA! USA!”

Trump then cataloged the stories of the men on Mount Rushmore, selecting specific details to build a narrative of citizen legislators, westward expansion, anti-slavery convictions, and the preservation of natural resources which concluded by equating the social justice movement with a radical ideology determined to “demolish both justice and society. It would transform justice into an instrument of division and vengeance, and it would turn our free and inclusive society into a place of repression, domination, and exclusion. They want to silence us, but we will not be silenced.”

Noem’s office anticipated 7,500 visitors would bring $2 million worth of tourism dollars into the state’s flagging tourism tax revenue fund, which is down 70% from last year due to COVID-19.

Leading into the event, many people were concerned the event will prove to be a hotspot for the virus as people travel back home.

Attendees at the event were not required to wear masks and were seated right next to each other in the stands. They were in close contact for many hours while they shouted, cheered and sang.

The South Dakota Department of Health has no plans to perform contact tracing after the event, even though Secretary of Health Kim Malsam-Rysdon is fully aware infection can be transmitted before a person shows symptoms.

“Any close contacts of a positive case, while that positive case was potentially infectious, would be advised to self-quarantine for 14 days. A close contact is a person who has been within six feet of a person for 15 minutes,” she said.

Noem originally expected private sponsorship to cover the cost of the fireworks, anticipated at no more than $350,000, but ended up paying $175,000 out of the South Dakota Futures Fund which is intended for long-term investments and infrastructure for “purposes related to research and economic development for the state.”