MMIW He Sapa, an organization dedicated to raising awareness about the number of missing and murdered indigenous women in America, presented to Cheyenne-Eagle Butte High School students last week.

Founder and manager of the organization, Cheyenne River Sioux tribal member Sunny Red Bear (Whitcombe), grew up in Isabel, SD. She is also a writer who writes to empower Native women.

She presented with her husband, Raynor Whitecombe, who is an American Samoan, a semi-professional football player for the Western Dakota War Eagles, and a bodybuilder sponsored by Bodybuilder.com.

The couple lives in Rapid City and work to inspire healthy lifestyles through marches, presentations, writings, coaching, training and a strong online presence.

In the presentation to C-EB students, Red Bear first addressed the effectiveness of marches. She explained to students that marches are often criticized because they appear to do nothing to change or address the problem.

There are many people who do not know the proportion of native women who are missing or murdered, or they hear about a case and then forget about it.

Native people nationally are an invisible population — a small percentage of the overall population and thus marginalized as insignificant on the whole.

A constant reminder that Native women continue to go missing and turn up murdered needs to take place to remind people that Native women are disappearing and their cases are not receiving sustained media attention.

Often, their cases seem to be filed behind other cases and forgotten. Pierre Police Captain Bryan Walz said in a West River Eagle article in June that there is no system set up to document the ethnicity of missing persons, but that ethnicity may be identified in various records available to the police department.

Savanna’s Act S.227, passed in December 2018, states the following reasons why the passage of the act was necessary:

• On some reservations, Indian women are murdered at more than 10 times the national average.

• More than 4 in 5 American Indian and Alaska Native women, or 84.3 percent, have experienced violence in their lifetime according to the National Institute of Justice.

• More than 4 in 5 American Indian and Alaska Native men, or 81.6 percent, have experienced violence in their lifetime according to the National Institute of Justice.

• Investigation into cases of missing and murdered Indian women is made difficult for Tribal law enforcement agencies due to a lack of resources, such as—

(A) necessary training, equipment, or funding;

(B) a lack of interagency cooperation; and

(C) a lack of appropriate laws in place.

• The complicated jurisdictional scheme that exists in Indian country—

(A) has a significant negative impact on the ability to provide public safety to Indian communities;

(B) has been increasingly exploited by criminals; and

Red Bear said that while Savanna’s Act was one step in the movement to protect indigenous women, it is only a part of the movement.

She encouraged students to speak up about violence against women and speak up for people who appear to be suffering from violence.

Whitcombe addressed the role men play in protecting the women and supporting them through the acronym RESPECT: Reserve Space, Elevate Other’s Voices, Support, Protect, Extend a Hand, Communicate, and Treat Everyone with Respect.

From this point the presenters explained that CRST faces a more immediate threat with the potential growth of man camps forming at the western border of the reservation.

Whitcombe and Red Bear emphasized what another presenter also emphasized to C-EB staff members the week before in an active killer training, that one must always aware of one’s surroundings.

Whitcombe encouraged students not to succumb to fear, but instead, always be aware. He identified habits of mind and behavior a person should practice to avoid becoming a victim to violence or abduction, connecting these habits to what many people have learned about stranger danger in elementary school or from parents.

Some of these habits include wearing only one earbud in public, avoid being alone in deserted areas, travel with the buddy system, and to be aware of the surrounding environment and the behaviors of the people in that environment.

Another aspect of avoiding violence, according to Red Bear and Whitcombe, is to practice a holistic, Whole Body Wellness approach to living, which includes attention to the kinds of food one eats, movement or exercise, balanced and healthy relationships, healing from past trauma, and getting enough sleep.

A deficit in any one of these areas can make a person vulnerable to attack from any number of sources.

Whitcombe acknowledged that living this kind of healthy lifestyle can be a challenge, but said that when people use negative sources to numb the pain of an unbalanced life, the negative actions and thoughts compound the original problems.

“You are capable of creating change. You have everything you need inside you to accomplish anything you want. Be a warrior,” Whitcombe told the students.

Red Bear shared a video of her poem “These Medicines Inside Me,” and shared that while her husband uses his body building as a primary outlet for him, she uses her writing. She told students that they each have their own positive outlets, and that if they have not found them yet, they should seek them through their passions.

“I’m nobody,” she said, “but I’m passionate, modeling gave me a platform to share who I am.”

She said that mainstream society, media outlets and Hollywood all paint a picture of who Native Americans are today, but Red Bear encouraged students to own their own stories.

“Show them [mainstream American society] who you are; don’t let them tell you who you are.”

At the end of the assembly, the couple hosted a random give-away to students able to answer questions about information from the presentation and meet physical challenges that acted as examples to movement needed to keep healthy. 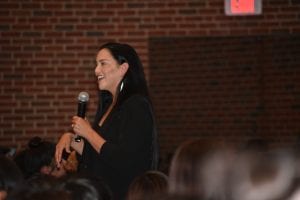 EAGLE PHOTO BY JODY RUST Speaking to C-EB students about the issue of Missing and Indigenous Women, Sunny Red Bear Whitcombe explains the mission of the MMIW He Sapa Movement and what students can do to prevent themselves or others in Native communities from becoming a statistic.