The Dupree School performed the Missoula Children’s Theatre production of “Red Riding Hood,” adapted by Michael McGill, the weekend of Dec. 3. The play was also performed in Eagle Butte on the weekend of Nov. 19.

The action centers around Red Riding Hood as she and her pre-teen pals try to stay on the straight and narrow. The not-so-bad-after-all Big Bad Wolf and a friendly neighborhood Forest Ranger urge the heroines to stay true to the path, for in the shadows lurk diversions and a sinister surprise or two. A pack of woefully nasty young wolves and a handsome Woodsman, too good to be true, round out the story. And what’s a wolf tale without Three Little Pigs and even a Boy Who Cries Wolf?!? With help from her family and a loyal young Locksmith with the key, Red finds her grandma. Now if only she could retrieve her picnic basket from those rascally Raccoons. Life is no picnic when you stray from the trail! 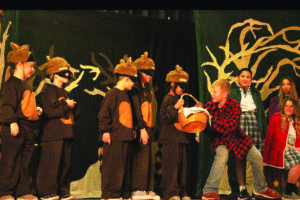 PHOTO COURTESY OF PATTY PEACOCK In this photo, the Woodsman (Zach Dekle) is trying to get Red Riding Hood’s basket of food back from some pesky, but very adorable, raccoons as Red (Trinity Leithauser) and two of her girlfriends (Keyra Jeffries, Zoey De La Rosa) watch. 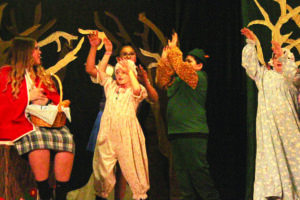