Missing and Murdered Indigenous Women and Relatives Tree made official 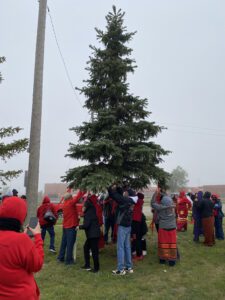 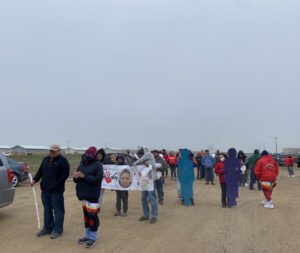 The walk started on the south end of main street and ended across the street from the high school where red ribbons were tied to the designated tree.

“Tessa was a murder victim in her home a year ago and now falls under the category of Missing and Murdered of Indigenous Women – MMIW.  I wanted to designate a tree to hang a red ribbon for her and allow other families from CRST who have lost their loved ones to participate.  They are gone but not forgotten,” said Sharon Brings Plenty, Tessa’s mother.

A beautiful prayer service was led by Red Ribbon Skirt Society member Darla Black of Oglala Sioux Tribe to commemorate the tree. This is the first-ever MMIW memorial tree on the Cheyenne River Sioux Tribe Reservation.

After not hearing from her daughter for several days, Brings Plenty went to check on her. Brings Plenty found Curley’s body in the bathroom of her apartment in Box Elder, South Dakota on October 11, 2020. Curley was stabbed multiple times in the neck and leg.

Law enforcement had suspects at the time but no one has been arrested in the year since the murder took place.

According to Rapid City Journal reporting at the time, Curley was a member of the Cheyenne River Sioux Tribe. She was born in Eagle Butte and grew up between there, Pierre, San Jose, California, and Rapid City.

Curley’s relative Rebecca Kidder said Curley was a “powerful force for good and she matters” and that she was “the first one to step up when family needs her.”