Millie Rexroat: A pioneer for women in aviation and in life

Millie, an enrolled member of the Oglala Sioux Tribe, is the only Native American to have served as a Women Airforce Service Pilot (WASP) during World War II.

Born to an Oglala Lakota mother and a white father, in Argonia, Kansas, on August 29, 1917, Millie spent part of her childhood on the Pine Ridge Reservation and graduated from St. Mary’s Episcopal Indian School in Springfield, SD in 1932.

She then earned a scholarship to the University of New Mexico and graduated with her Bachelor’s degree in 1939, and later worked at the Army War College in Washington, DC.

In December 8, 1941, the United States declared war on Japan one day after the Japanese attack on Pearl Harbor. Three days later, the U.S. declared war on Germany and Italy, entering into the Second World War.

Women such as Millie Rexroat and Marcella LeBeau answered the call in one of America’s darkest chapters- Millie joined the WASP’s as pilot and Marcella joined the Army Nurses Corps as a nurse.

In an audio file on the South Dakota Public Broadcasting website, Millie shares her extraordinary life story and details her military service.

Millie said before beginning her office job at the Army War College in 1943, she worked for the United States Engineers building airfields across the nation. The country was two years into the war and there was a collective yearning to contribute as much as possible.

“I had some skills that I was pretty good at, but that consisted of typing and short hand and other office procedures. And I didn’t want to keep on doing that because I felt like I was capable of quite a bit more. This was during the war and almost everybody you encountered wanted to do something to help the war effort, and I was one of those,” said Millie.

Wanting to do more and knowing that she could do more resulted in Millie exploring other career options. She thought of joining either the Women Army Corps, the Navy, or the Marines, all of which did not appeal to her.

“I thought, ‘If I had some background of doing something, maybe I could do something that really made a difference… I didn’t even know how to drive a car… I could do something like fly. So I went out to the airport and found some guys out there that had a flight school. I told them, ‘Hey, can I learn to fly out here?’ and they said ‘No.’ I said ‘Why not?’ They said, ‘In the first place, you’re a woman. In the second place, you are not in the Civil Air Patrol… and in the third place, unless you are going to be in WASP, you just can’t do it’,” recalled Millie.

Millie said she did not know what the Civil Air Patrol was, then told the instructors that she was going to be a WASP.

“They said it was going to cost six dollars an hour for solo flight and eight dollars an hour for instruction. So I said, ‘Alright, when can I start?’ So I had a day and half off each week, and that’s when I did most of my flying at that same place. If you wanted to be in the WASP, they sent you an application and information that you must have thirty-five hours of flight time before they accepted your application,” said Millie.

Before long, Millie reached the required flight time hours and sent in her packet and soon afterwards, she received a telegram notifying her that she had been accepted into the WASP program. The telegram stated that upon graduation, she would be enlisted as a Second Lieutenant in the Army Air Corps.

Millie shared that her sisters were supportive of her decision to become a WASP, while her mother was not- it was a dangerous job during a dangerous time, said her mother.

Nevertheless, Millie excitedly reported for WASP training in Sweetwater, TX, the only training base for women in the country at the time. There, Millie took the enlistment oath, did physical training, lived in barracks, and started flight school.

According to Millie, the average training day began at 6 a.m. reveille, morning formation, and a march to the chow hall for breakfast. The trainees then attended ground school in the morning and flight school in the afternoon. When not in instruction, the trainees studied for their frequent exams. Courses included navigation, weather, engine and airplane maintenance, instrument, and actual flight time, all of which were equivalent training to those that male cadets received, said Millie.

Their training, although non-combat, was nonetheless dangerous. 38 WASP’s lost their lives.

Millie successfully completed training and graduated on September 7, 1944, earning her pilot wings. It was then that she learned that she would not be given the rank of Second Lieutenant, as her acceptance letter had stated- Congress had voted not to give WASP’s military status. It was not until decades later in 1977 that the WASP were granted retroactive military status.

Although they did not have official military rank at time, military personnel were ordered to treat WASP’s as though they were officers, said Millie, who explained that she was treated and well-received by enlisted military and civilian personnel when she reported for duty in Eagle Pass Army Airfield in Texas.

There, Millie was finally free to do a job she so loved: fly. She ferried officers their destination, transported cargo, and flew a T-6, towing targets for air-to-air and ground-to-air gunnery practice for male pilots.

“I did quite a bit of flying,” said Millie.

In December 1944, Millie and her fellow WASP’s received devastating news from the War Department: the WASP program was discontinued and would be disbanded.

In a letter from Army Air Corps General Hap Arnold, he wrote, “When we needed you, you came through and have served most commendably under very difficult circumstances, but now the war situation has changed and the time has come when your volunteer services are no longer needed. The situation is that if you continue in service, you will be replacing instead of releasing our young men. I know the WASP wouldn’t want that. I want you to know that I appreciate your war service and the AAF will miss you…”

Indeed, the tides of war were changing- American and Allied Forces were making headway with victories in the Pacific Theater and throughout Europe, defeating and weakening the Axis Powers. Victory and an end to the war seemed imminent, and the millions of women across the nation who answered the call and filled the shoes men left behind began preparing for an exit out of the workforce, whether they liked it or not.

“We were devastated. I think all of us. None of them [women] were aching or trying to get out because we were enjoying flying. No matter what kind of duty we had, we liked it… it’s just like someone stuck a pin in a balloon when they said they were going to discontinue the program, and they did,” said Millie.

At the time, civilian aviation jobs for women were non-existent. Some WASP’s chose to return home while others, like Millie, joined the Air Force Reserves. Although they would not be on flight status, they could apply for a commission and could be given rank based on the number of flight hours accumulated during their WASP service, said Millie, who was given the rank of First Lieutenant.

Millie served for ten years in the Air Force Reserves as an air traffic controller, while simultaneously working for the Civil Aeronautics Administration at Kirtland Air Force Base in Albuquerque, NM.

In the audio recording Millie said the only time she flew a plane after her WASP service was when she could afford to rent a plane, which was a luxury expense, and seldom occurred. When asked the last time she flew, she answered, “About fifteen or twenty years ago.” She was 91 years old at the time of the recording.

The rest of her career was spent in aviation as an air traffic controller for the Federal Aviation Administration with jobs in Texas, Albuquerque, and Santa Fe.

In 1977, the 1,074 women who served as WASP’s were finally given military status and were officially recognized as veterans. In July 2009, President Barack Obama signed a bill awarding WASP’s the Congressional Gold Medal. At that time, roughly 300 WASP’s were still alive, including Millie, who had long returned home to South Dakota and was living at the Michael J. Fitzmaurice Veterans State Home in Hot Springs.

It was there that Mia Little Thunder found her after her friend, Marcella LeBeau, asked her to find her long-lost friend.

According to Marcella, she met Millie years before at an North American Indian Women’s Association conference and the two formed an immediate bond. Over the years, the women stayed in contact and even travelled to retirement homes to share their WWII experiences.

As they got older, Marcella said she lost touch with Millie and in 2015, asked Mia to find her, which didn’t take long for her to do. Soon, the two were once again together, sharing stories, laughing, and reminiscing about days gone by.

“It was so good to see them together and be so happy,” said Mia.

Mia, a Rapid City resident and Cheyenne River Sioux Tribal member, said she would visit Millie as well, and the two also formed a friendship.

“Millie was so funny. She loved animals. I told her about my cat and she asked if I could sneak her into the nursing home,” said Mia, laughing as she remembered her friend.

A veteran herself, she understood the important role Millie had pioneering for women, and was in awe of her elderly friend.

“I felt so honored. I cannot describe it. It’s an honor to have known her and to hear all her stories and advice,” said Mia.

On June 28, 2017, Millie passed away at age 99. A legendary woman had journeyed on. Her son, Forest, elected to have her cremated and applied to have her buried at Arlington National Cemetery in Virginia.

According to the national cemetery website, thousands of burials take place there every year, causing a wait list that can take up to seven months before burial can occur.

Meanwhile, in October 2017, the Ellsworth Airfield Operations Building was renamed the “Millie Rexroat Building”. Marcella and Mia joined Millie’s son at the ceremony, and Marcella spoke and paid tribute to her friend.

On March 28, Millie’s ashes were interred at Arlington National Cemetery with full military honors. She received a 21-gun salute and Taps was played to the sound of mournful tears and sniffles. The United States Air Force Honor Guard bestowed Forest with a folded American flag, and expressed gratitude for his mother’s service to the country.

“She was an absolutely awesome lady and did so much in her lifetime and in the war. The younger generation need to hear her story,” said Marcella.

In an audio recording, Millie who was 91 years old at time, was asked what it was like to be the first female military pilots in the history of the United States. She said, “Our service, what we did, proved to the military and the civilians that women could do that. Of course, I knew that I could do it. We knew that we could do it.” 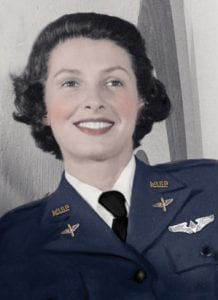 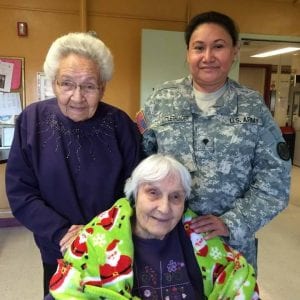