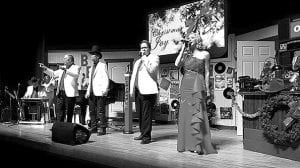 The magic of Medora takes to the road again this holiday season with 27 performances of a music and magic variety show in 22 communities, including a 7:30 p.m. show Dec. 2 show at the Scherr Howe Center in Mobridge.

“This year we are excited to bring this heart-warming production to even more venues across the upper Midwest,” said Randy Hatzenbuhler, president of the Theodore Roosevelt Medora Foundation.

He said Sorensen, Walter and Mason created a Christmas show in 2015 to cap the 50th anniversary of the Medora Musical.

“It was quickly obvious that it needed to be an annual show,” he said, and now the presentation is into its third season.

The show will feature the musical talents of Mason, Walter, Christenson and Willow, and the comedy and magic talents of Sorensen.

“I’m the magician,” Sorensen said, “but what’s really magical is the holiday entertainment and a taste of Medora presented by Emily, Job, Jared and Chad.”

“What makes the Christmas show so special is that it is about community,” Christianson said. “We are blessed to have the opportunity to reach out to people and send the message of giving and gratitude.”

Walters said that even 25 years ago, as a Burning Hills singer, she thought a Christmas show would be the perfect way to bring the spirit of Medora to people outside the area.

Three years ago, “It was finally time,” Walter said. “And it’s not a holiday bash, it’s Christmas. That means a great deal to me.”

Walter, known as “The Queen of the West,” was host of the Medora Musical from 2010 to 2015. While serving her country, Walter was the lead vocalist in the US Air Force Strategic Air Command Band and has worked with such stars as Bob Hope, Lee Greenwood and John Denver. She starred in Patsy Cline shows across the United States and Canada, and recently did a tribune in Mesa, Ariz., to Karen Carpenter. One of Carpenter’s songs will be featured in the Christmas show. Walter also spent several years as a featured vocalist performing on cruise ships all over the world.

Jared Mason performed as a Burning Hills Singer and featured vocalist in the musical where many remember him for his yodeling abilities. Since his time in Medora he has become an award-winning recording artist, composer and actor, and recently starred on Broadway as Jerry Lee Lewis in the Tony Award winning musical Million Dollar Quartet. He spent the last two summers in Medora starring in his one-man show Jared Mason Live. He is currently in Nashville working on a new solo album and several other projects.

Actor, singer, dancer and playwright Job Christenson, has hosted the Medora Musical and starred on Broadway. “Job is one of the finest singers North Dakota has ever produced,” said Curt Wollan, long-time producer of the Medora Musical. “He has an incredible soaring tenor voice.” Christenson lives in New York and is studying for a master’s degree in playwriting. He has vast experience performing in musicals. He’s done numerous benefits and voice overs in New York. He continues as artistic and development director for Sleepy Hollow Theatre and Arts Park in Bismarck, ND, and is working on a play trilogy about North Dakota.

Bill Sorensen served as co-host of the Medora Musical for four years. He was a featured speaker in the new 2016 Medora Gospel Brunch. As a magician, juggler and public speaker he has performed over 5,000 shows nationwide. Sorensen served as mayor of Bismarck, ND, and in the ND House of Representatives.

New to this year’s show is Chad Willow, pianist, singer, and banjo player from Minnesota, who appeared on the bandstand for 12 seasons of the Medora Musical as associate musical director of the show and leader of the Coal Diggers band. He produced and recorded a vocal bluegrass record entitled Scarecrow, with musicians from the Medora Musical bandstand stage.

Forum Communications and the Theodore Roosevelt Medora Foundation are sponsoring the tour.