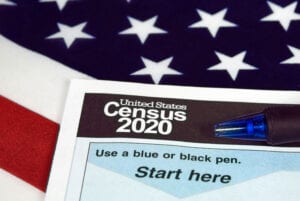 Be on the lookout for your packet

Census workers are going to every residence on Cheyenne River, whether it’s a house, trailer, or other type of home. Workers will wear PPE and have no-contact drop off. You can respond by phone, mail, online, or in person. If you opt to respond in person, a Census Enumerator will visit your home and take your answers verbally in August.

According to Lakota Vogel, co-chair of the CRST Complete Count Census Committee and Executive Director of the Four Bands Community Fund, enumerators are issued an iPhone by the Census Bureau for the sole purpose of taking Census information in person. There is an app on the phone that instantly uploads the information, geocodes the response to the location, and marks that Census ID as complete.

“Ten years ago, they had to carry around a big binder of stuff. This is real time now, which is probably the most efficient the Census has been, ever,” Vogel said.

So efficient is the app that if a home completes the Census online or over the phone the day before a scheduled visit, that household is immediately marked as complete and the Enumerator will know the next day not to visit.

Why the Census is important

Completion of the census is very important. As with everyone involved in the Census across United States indigenous communities, Vogel is passionate about her commitment to the Census. This year’s count sets the precedent for funding, housing, and all Federally-supported programs for the next ten years.

“It matters because everything that we need as a native nation as far as federal funding allocations is dependent on this moment or these next few months,” she said.

Vogel continued, “We at Four Bands have to identify and prove that we’re serving poverty areas through Census tracts. We have to report the Census tract for every loan that we do. That type of information is really important for Federal funding because we wouldn’t survive without it.”

Programs that are funded based on Census data include transportation, housing, WIC, LIHEAP, Head Start and Medicaid.

The committee has a Facebook page, 2020 CRST US Census Page, from which they all agree to amplify each other’s messages about the importance of the Census.

“We’ve been working since November to develop a 2020 Census campaign. We’ve galvanized a group of local leaders that are volunteers. We all are committed leaders from separate organizations that depend on Census data throughout the year,” said Vogel.

The impact of an undercount expands over time

The impact of the Census expands over time. For example, if a family of six is not counted, that greatly impacts funding. That family would have made the Tribe or an organization eligible for $2,000 of funding per person, and over ten years, CRST will have lost $120,000 in funding.

And those funding dollars do not stop there. Other outside sources of revenue look to existing resources as a basis to grant their support. For example, a foundation or philanthropic organization may look to the existing funding base of an organization or program, see the Census count and Federal funding, and base the amount of money they are willing to pledge on those numbers, said Vogel.

If there is an undercount, the effect ripples out across the community over decades and generations.

“Of course that was inaccurate because we were undercounted in the 2010 Census, so we were impacted on that because we were shorted a lot of money that could have helped us out with COVID,” she said.

The Census is Still Hiring

Vogel said a lot of her effort in the last months has been to support people applying for Census jobs. Her organization offers a location for training program, fingerprinting, and assistance with the applicant portal.

She said she feels Census positions would be perfect for older people who have time and deep connections in the community, but those applicants also need help to set up an email address and retrieve voicemail messages from the Census Bureau.