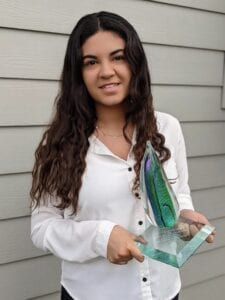 Roosevelt High School Senior and CRST tribal member Jazmyn Luckett has accomplished a lot during her high school years. Her most recent accomplishment was a national debate team win which won her a scholarship and a donation to the charity of her choice. She chose Cheyenne River Youth Project in Eagle Butte.

Luckett won the Julia Burke Award at the National Tournament of Champions which she and her debate partner Rylie Torguson qualified to participate in without help from their coach due to COVID-19. Luckett was awarded a $2000 scholarship which she will use in her education at Wake Forest University in Winston-Salem, North Carolina where she will be on scholarship and the pre-law path by majoring in sociology this fall.  Additionally, Luckett was able to donate another $2000 to the Cheyenne River Youth Project (CRYP) in Eagle Butte.

“We’re so grateful to Jazmyn for her donation, and for simply being the exceptional young woman she is,” said Julie Garreau, CRYP’s executive director. “She is gracious and thoughtful, and in her generosity, we feel the strength of her connection to Cheyenne River. She cares deeply about our community.”

Luckett has felt really empowered by participating in debate and recommends the extra-curricular to any of her native peers. Debate gives youth a platform to speak, share opinions and back them up with facts. Luckett says, “I learned to express my ideas without feeling self-conscious about them and I feel that the native community can really benefit from all of these skills.”

Luckett has over twenty debate accomplishments in her high school career. Four of these accomplishments were earned in 2021. She is nationally ranked as 19th Best Debate Team. Luckett is also a Double Octa Finalist and 18th Speaker Award winner at the Barkley Forum Debate Tournament. She participated virtually in the Atlanta, Georgia competition.

The debate season runs from September to April with post-season tournaments continuing through June. Luckett will not be participating in the June tournaments since she graduated in May.