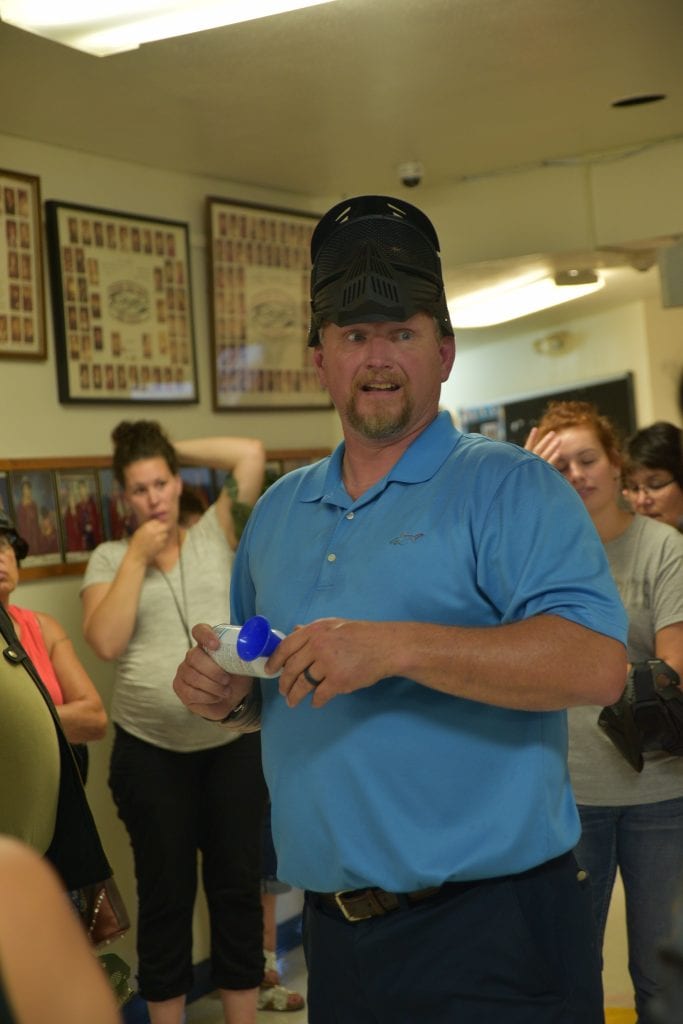 Tony Wingert, a trainer with Sheridan Strategic Solutions LLC, provided face masks for participants and used a blow horn to simulate gunshots during a recent active killer training session called “S.A.V.E. Yourself” at C-EB High School. Wingert and the founder of the organization, Chad Sheehan, have also trained staff members in the Gettysburg school system. Photo by Jody Rust 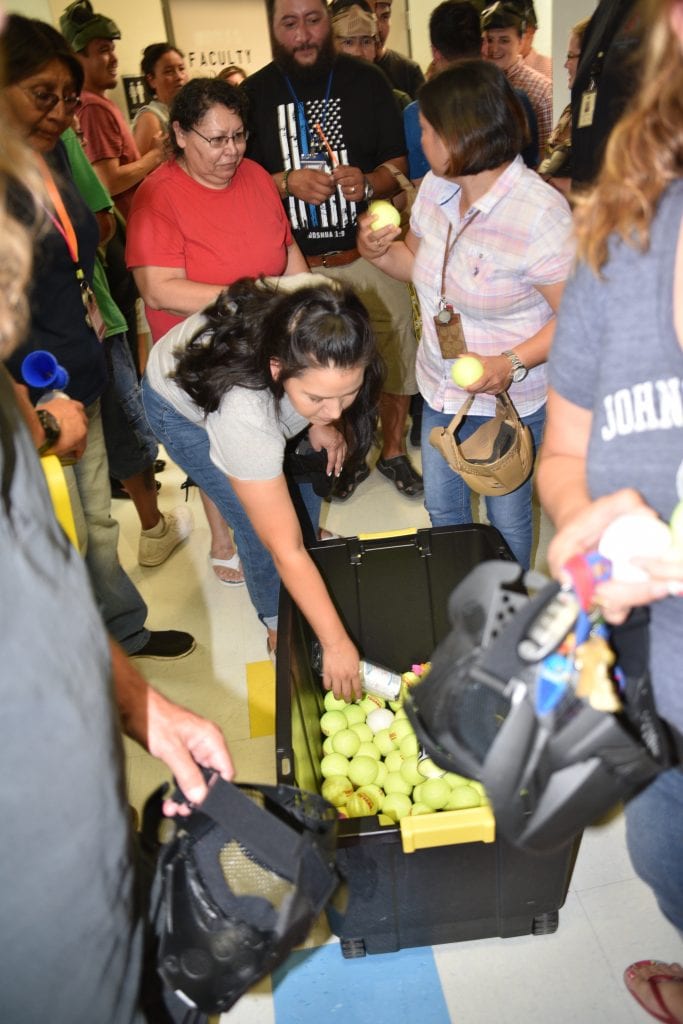 Mass shootings have become common and pervasive enough in America that schools, which have historically been considered safe zones in most communities, train staff and students what to do if a shooter should terrorize their hallways and classrooms.

Schools on the Cheyenne River Sioux reservation have policies about what to do in case of tornadoes and fires, bomb threats and other threats that require either an evacuation or a lockdown.

At one time, the understood public service announcement was to comply with someone who has a gun pointed at you in a threatening manner, but while that advice would be appropriate in a hostage situation, most mass shooters are on a mission to kill, not make a deal.

The United States Department of Homeland Security recommends in any active shooter situation, for people to Run, Hide and/or Fight.

The dhs.gov website contains a pdf document with specific information about what to do if a person finds him or herself threatened by an active shooter, and then what to do once the police arrive.

Staff members at Cheyenne-Eagle Butte received training last week from Sheridan Strategic Solutions LLC out of Sioux City, IA that coincides closely with the suggestions spelled out in the Homeland Security document.

One aspect of the training that presenters Chad Sheehan and Tony Wingert, both former police officers, stressed is that people need to be aware of their surroundings.

Sheehan’s training is called S.A.V.E. Yourself. The acronym stands for “Survive A Violent Encounter,” and the action one should take to survive that encounter: “Shelter in place, Awareness, Violence stops violence, and Evacuate.”

The training differs only slightly from the advice and training provided by Homeland Security. Instead of DHS’s “active shooter,” Sheehan refers to the person as an “active killer.”

The definition for either term per dhs.gov and Sheehan is, “Any individual actively engaged in killing or attempting to kill people in a confined and populated area; in most cases active shooters use firearm(s) and there is no pattern or method to their selection of victims.”

Sheehan has trained staff members in schools across the nation, and locally in Gettysburg schools and Cheyenne-Eagle Butte schools.

“These things [active killing events] are out of control, so we have to be prepared,” Sheehan told C-EB staff members.

The goal of the morning training session was to create an awareness that could lead to prevention. Staff members were given a list of warning signs they may identify in students or adults at school/work, and events or situations that could trigger potentially violent behavior. Many of these signs are the same signs teachers and students are taught to be aware of as signs of depression or potential suicide attempts.

Sheehan also emphasized problematic behaviors that could suggest someone is in the planning stages of creating an active shooter/killer situation such as a sudden fascination with guns, spiked interest in other mass killings, or ominous social media posts, to name a few.

The first mass school killing was caused by a bomb.

On May 18, 1927, a local Bath, MI community member rigged the school with dynamite, killing children and staff inside the school. The bomber also blew up his home which killed his wife and two horses, and finally, after pulling up to the destroyed school building, he blew up his car, killing himself and several others.

In all, 44 people died, 38 of them children according to Smithsonian.com, but it was not until the shooting at Columbine High School in Colorado that these mass killings at schools raised the sensitivity of contemporary society to issues of bullying, depression and the effects of violent media on human behavior.

Sheehan said that when he speaks to people at schools, he refuses to name the killers of shootings. He provided extensive lists of mass killings in the United States, and said that most of the killers who used guns were not gun enthusiasts, but had developed an interest in guns just months or weeks before the shootings.

Sheehan said that he trusts what author Lt. Col. Dave Grossman and Gloria Degaeteno wrote in their 1999 book “Stop Teaching Our Kids to Kill,” which explores the effects of violence from media sources on the behavior choices of young people.

Both presenters and staff members accepted this new reality — that the training to defend against a violent attacker is now necessary — with a quiet reluctance, almost in the same way people train for tornadoes or fires.

“You can’t waste time coming up with a plan,” Sheehan said. When a killer is present, one must have practiced what they will do, or risk not having the presence of mind to save him or herself, which could in turn save someone else.

In most trainings offered by public entities or private ones, victims are being taught to get away, but also taught to use whatever means necessary to survive — to distract or disable the shooter — so that escape is possible — so that survival is possible.

For more information about what to do in case of an active shooter encounter, go to dhs.gov.