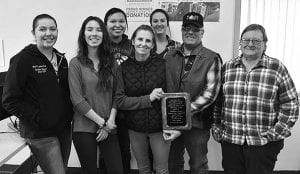 C-EB Future Farmers of America organization presented Cathy and Clinton Simon with a plaque for their Grow Communities grant donation of $2,500, won from the Simon’s participation in the Grow Communities program supported by the Monsanto Fund. FFA members Jodi Schad, Tori Jensen, Kianna Haskell and Miranda Vines are pictured with Cathy and Clinton Simon holding the plaque, and Deb Joens, FFA advisor and ag teacher. ​

Local farmer Clinton Simon and his wife Cathy, who live east of Parade, SD, received an application for a the Grow Communities  Grant Program, filled it out and thought nothing more about it, Clinton Simon said, until they received a letter asking them to which community organization they would like to award the $2500 grant.

According to the America’s Farmers website, the Grow Comminutes grant is open every August when “eligible farmers can apply for a chance to win a $2500 grant to pass on to the local-non-profit organization of their choosing.”

When the Simons learned that they were the recipients of the reward, C. Simon decided that he would pass the money to the Cheyenne-Eagle Butte Agriculture program.

“My class built this building,” said Clinton Simon as he stood with his wife in Ag Teacher Peg Joen’s class room.

The class room is one room in a building with a nursery area, office space, welding space, and barn space.

Joen’s Future Farmers of America (FFA) youth agriculture organization and classes host several agriculture events each year, including selling plants from their nursery in the spring and hosting a petting zoo for younger students.

FFA members attend regional contests and the state and national FFA ag conventions in the fall of each year.

and said she will use the money, “to help send some of the FFA members to the National Convention held in October. It will also help with the costs of hosting an animal nursery during National FFA week in February.”

In addition, Joens said the money will be used “to help with the costs of raising plants in the greenhouse, that gives a lot of people in town access to healthy and affordable plans in our area.”

Joens said the plants are started from seeds and cared for by the Introduction to Agriculture students.

To show their appreciation for the gifted grant money, the C-EB FFA organization under Joens’ leadership, designed a plaque for the Simon’s to document the donation they offered to their alma mater.

Clinton spoke fondly of the ag program that he and his wife went through at C-EB, and said that it helped him and Cathy establish his career and livelihood.

The couple said they were happy to be able to offer the award to the program and to the youth who may benefit from the program as much as they did.

The Farmer’s Grow Communities donation is funded by the Monsanto Fund. According to the award letter to Joens, received, “The purpose of the Grow Communities program is to partners with farmers’ to make a positive impact on farm communities across the country by supporting local non-profit organizations.”