Pictured here are the Native Pop participants. A few of our youth in Eagle Butte also participated in this event. 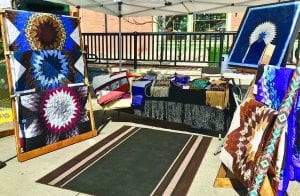 Here are some of Bonnie LeBeau’s quilts and hand bags that were on display at her booth.

Through the Four Bands Community Fund, and with training for artists in business through First People’s Fund, LeBeau learned to profit from her talents in quilt making and has created her own quilting business, Bonnie LeBeaux Quilts.

“Quilting is my passion,” LeBeau said, “I learned to sew watching my mom, Cynthia, and my grandmother, Marcella, growing up.”

LeBeau started quilting with her grandmother, and then ventured on her own in 2008. She has been quilting for 18 years.

“I like teaching and inspiring others so that they can create their own projects,” LeBeau said.

LeBeau was just one of over 50 artists working in a diverse range of mediums at the Native POP event.

Other prizes were given for Innovation, People’s Choice and a Special Publicity award with $17,000 in total award money.

Juried artists submitted their original art for judging on Friday, July 14  by noon.

Visitors voted in the competition during the market on Saturday.  Except for People’s Choice award, winners were selected by a panel of judges that included Masayuki Nagase, Dixie Thompson, and Marty Two Bulls Jr.

“Native creativity is expressed in many ways, and Native POP strives to be a platform to lift up and highlight all the different forms it takes. Additionally, we are seeing progress in creating an opportunity for a growth in learning about Native cultures through arts and culture. This year the participating artists brought their best work that not only raised the bar but showed that they could compete in national or international art markets,”

Native POP is first and foremost a juried fine art show featuring established and emerging Native American artists, but as a cultural celebration, the event also featured performances throughout the day, cultural demonstrations, a film showcase, and a fashion show.