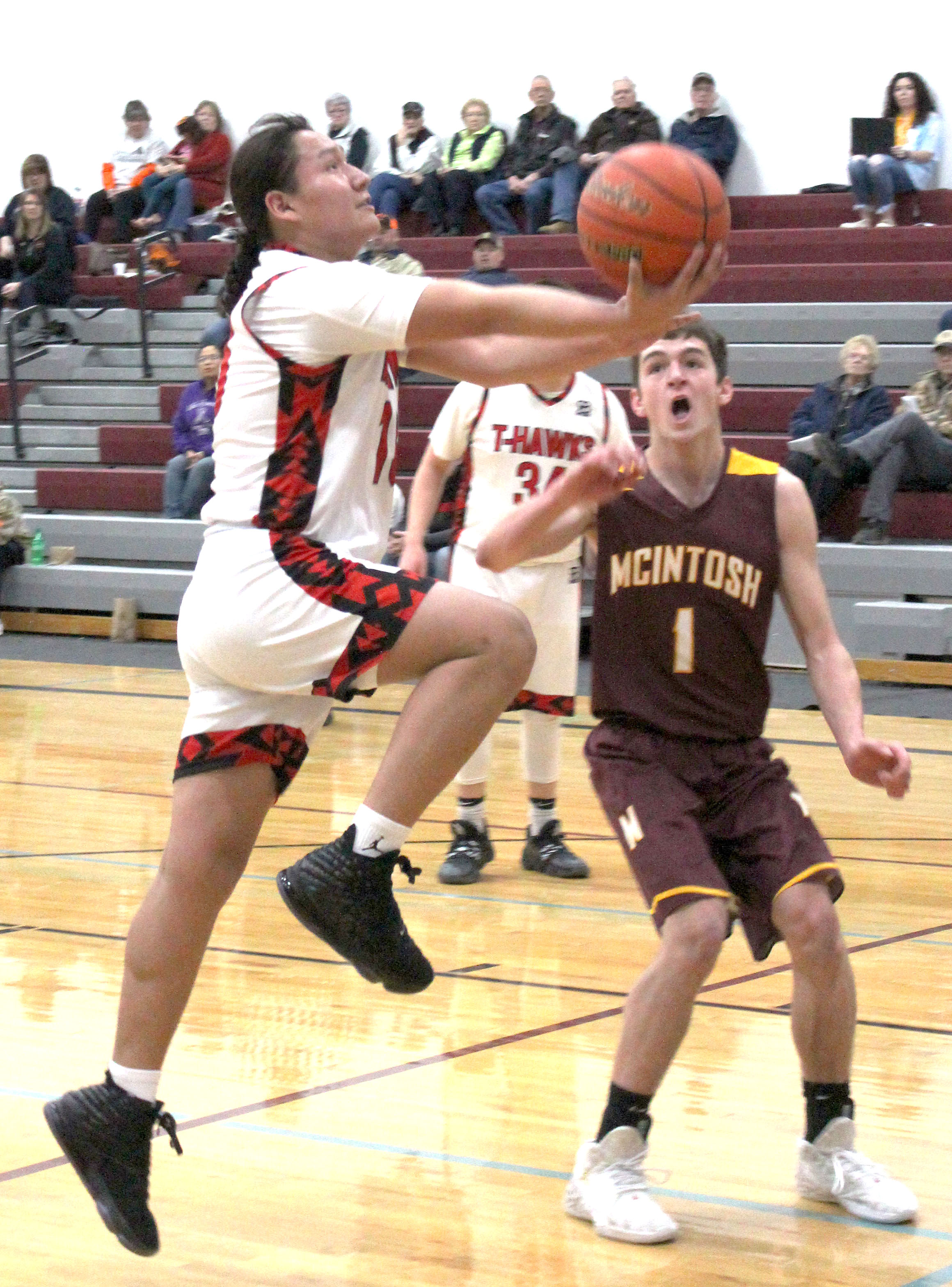 PHOTO BY PATTY PEACOCK Tiospaye Topa Thunderhawk Manual Swan III soars to the hoop for while McIntosh Tiger Zach Bertolotto attempts to stop him. When the game ended, McIntosh won the game 47-50 and the Thunderhawks went home with 6th place. Swan was also chosen for the Little Moreau Conference team.

For their first game of the tournament, the Timber Lake Panthers hosted the Bison Cardinals. The Cardinals, who have been struggling all season, were going into the match-up winless with a 0-10 record. The 8-3 Panthers, on the other hand, were hot and coming off a two-streak victory. The Cardinals have averaged 22 points per game and their performance against the Panthers reflected that with a final score of 72-17.

The same night, the Lemmon Cowboys travelled to LaPlant to take on the Tiospaye Topa Thunderhawks. Both teams were going into the game relatively matched with the Thunderhawks earning 7 wins of 11 games in their season. The Cowboys held a 7-6 record. The final score echoed the equal competitiveness with the Cowboys edging over the Thunderhawks, 69-65.

For their first-round game, the Dupree Tigers played the Faith Longhorns in Longhorns’ territory. Just a few days earlier, the two teams had a showdown with Longhorns outscoring the Tigers, 71-43. Dupree has struggled all season long, winning only 1 of their 13 games, while the Longhorns have had a stellar season with an 11-2 record. In the end, Faith handed Dupree another loss, 80-37.

On the same night, the 9-4 McIntosh Tigers traveled to Buffalo to take on the Harding County Ranchers. The teams were evenly matched with both teams playing 13 games in their seasons. The Tigers lost only 4 of their games compared to the Ranchers’ 3 losses. In the end, Ranchers easily corralled the Tigers, 76-49.

The Faith Community Center was the epicenter for all the second round court action. Playing first was Tiospaye Topa and Bison, with the winner advancing the consolation round while the losing team played for 7th or 8th place. The Thunderhawks swooped down and handed the Cardinals a devastating loss, 77-29. Tiospaye Topa would face off the winner of the Dupree/McIntosh game.

It was a catfight between Dupree and McIntosh as players from both Tigers teams dueled on the court; however, McIntosh clawed their way to victory, outscoring Dupree, 79-41. The loss for Dupree meant they would play Bison, while the win for McIntosh advanced them to the consolation game against Tiospaye Topa.

Playing to advance to the championship game were the Timber Lake Panthers and Lemmon Cowboys. The game was exciting and Lemmon squeezed passed Timber Lake, taming the Panthers, 57-40.

Also in contention for the championship title were Faith and Harding County. Try as they might, the Harding County Ranchers could not round up the Longhorns, who got away with a 75-69 victory.

Bison took on Dupree with the Tigers handing the Cardinals their third straight loss in the tournament. The win for Dupree secured them 7th place with Bison placing 8th.

In the consolation round, McIntosh edged out over Tiospaye Topa, 50-47. The win for the Tigers secured them in 5th place, with the Thunderhawks settling for 6th place.

Playing for third and fourth place was Timber Lake and Harding County with the Ranchers surpassing the Panthers, 69-59.

The championship game proved to be an exciting showdown with Lemmon facing off against Faith. The Cowboys won the championship title, outscoring the Longhorns, 57-55. 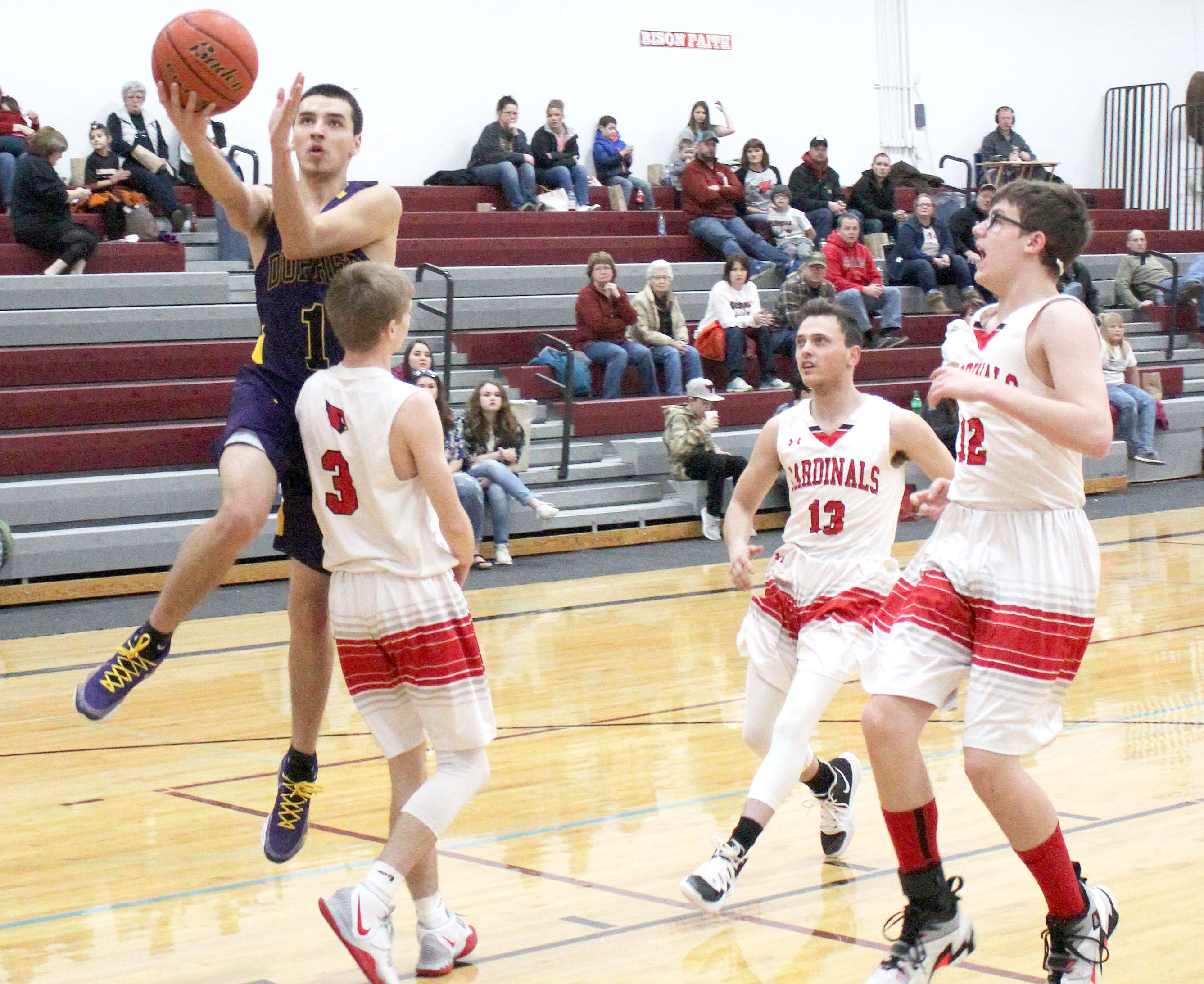 Dupree senior Jacob Anderson Jr. makes a smooth layup for the Tigers. Dupree defeated the Bison Cardinals, 37-61, to place 7th in the Little Moreau Conference Tournament. Anderson was also chosen for the LMC All Conference team. 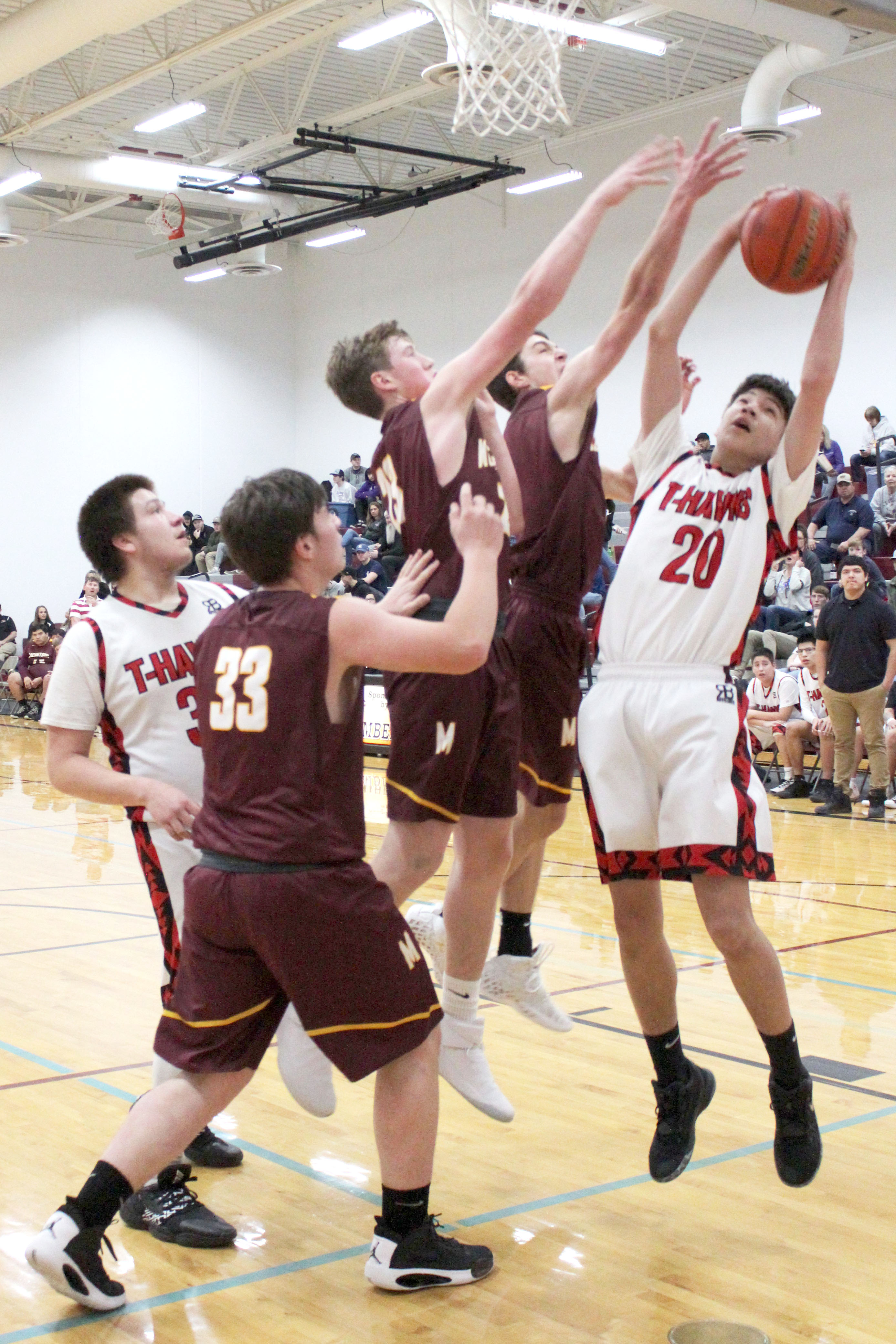 PHOTO BY PATTY PEACOCK Overcomer: Despite three McIntosh Tigers blocking his way, Tiospaye Topa’s Jaysen Meeter works to put up two points. The game was shot for shot and in the end McIntosh won 47-50. 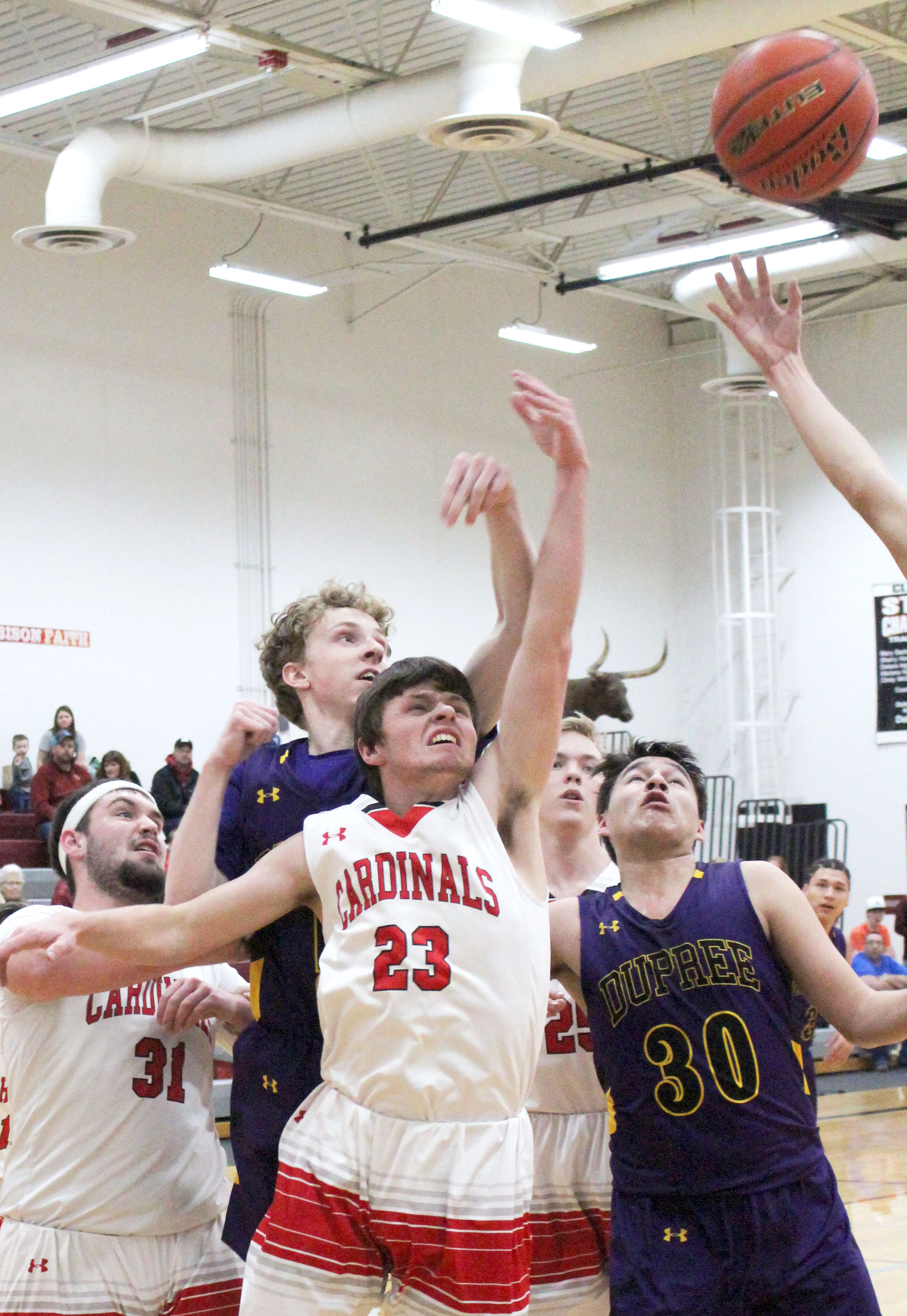