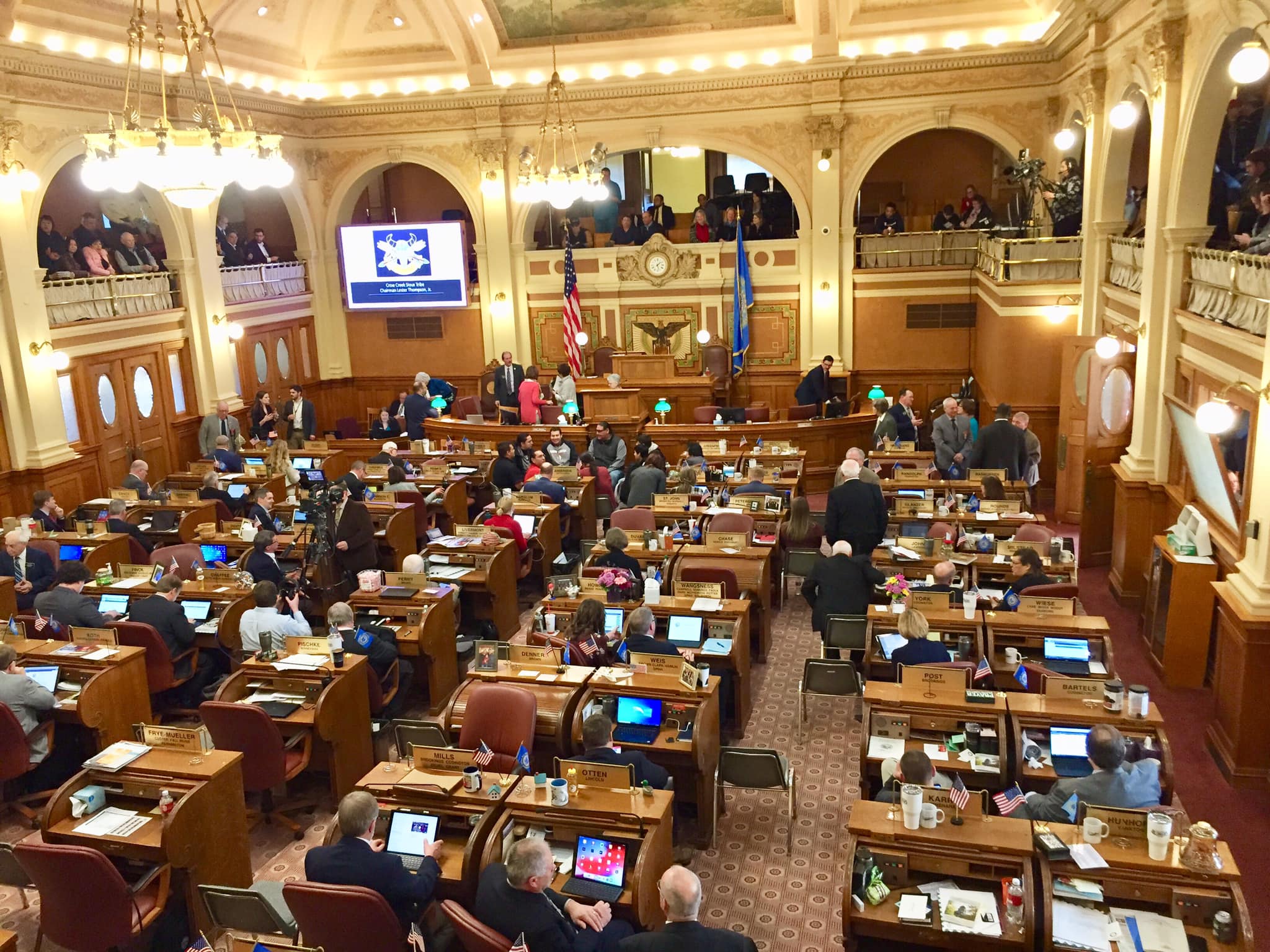 The South Dakota Legislature will likely hold a special session by the end of June to address financial uncertainty caused by the COVID-19 pandemic and to potentially remake the coming year’s spending plan passed earlier this month, legislative fiscal leaders say.

Members of the Legislature’s Joint Appropriations Committee told South Dakota News Watch that economic uncertainty now hangs over South Dakota as businesses continue to shut their doors, layoffs accelerate around the state and tourists stay away.

The increasingly dire economic news has led legislators to anticipate that drastic changes may be needed to the state budget lawmakers just passed for the 2020-2021 fiscal year, which begins July 1. Adjustments to the budget could include revision or elimination of the 2% pay increase for teachers, state employees and Medicaid providers originally included in the spending plan.

The lawmakers said they likely will not have enough updated economic information by March 30 — the final day of the regular legislative session — to make good decisions about potential changes at that time.

Anecdotal evidence is showing sharp declines in consumer spending, the bedrock of the U.S. economy and a major source of the sales taxes that make up much of South Dakota’s state government revenues. Sales taxes were projected to make up 63% of the state’s general fund revenues for the 2021 fiscal year, according to state Bureau of Finance and Management budget documents.

“There are a lot of people that were really happy with what came out of our budget negotiations toward the end of the session. But the world has changed in those 10 days, so yeah, everything’s on the table again,” said state Sen. John Wiik, R-Big Stone City, co-chair of the Joint Appropriations Committee.

Rep. Chris Karr, R-Sioux Falls, co-chair of the joint committee, was more definitive. He said some one-time spending, such as for new university buildings that were added to the existing year’s budget, likely will be cut by March 30. But there is plenty of time to make adjustments to the coming year’s budget by holding a special session.

“I think it’s likely that we would need a special session. There’s no point in making those changes next week,” Karr said on Wednesday, March 25. “Frankly, we don’t have to do anything with fiscal year 2021 next week. Time is on our side in that case.”

Democratic state Sen. Reynold Nesiba of Sioux Falls said he thinks Gov. Kristi Noem may ask the legislature to totally or at least partially re-write its 2021 budget bill. Doing so, he said, would require both the Bureau of Finance and Management and the Legislative Research Council to create new revenue projections based on sales tax collection data from March and April. That data, though, won’t be available until some time in May or even June.

“I don’t think we can reopen a general budget discussion on veto day [March 30] and pass that,” said Nesiba, who also sits on the Joint Appropriations Committee. “I just don’t think we have enough information.”

Uncertainty at the federal level is also complicating matters. Early Wednesday morning, top leaders in the U.S. Senate announced a deal on a roughly $2 trillion stimulus package that includes direct payments to citizens, loan programs for businesses and support for state and local governments. Finite details on the plan were not released and opposition to the bill from progressives in the U.S. House — concerned over the bill’s business loan programs — were threatening to hold up its passage as of March 25.

South Dakota state lawmakers said the federal stimulus bill, however it shakes out, will have a big influence on their decisions. For example, the state Legislature will need to authorize government departments to spend any new federal money that comes in, Karr said.

On the bright side, federal negotiations appear to be going well and Nesiba was hopeful that the effort would be big enough to blunt some of the pandemic’s economic effects.

“I’m pretty optimistic actually,” Nesiba said. “They have really aggressive unemployment insurance for the next four months, there’s money in there for state and local governments, a lot of money for hospitals and dealing with the pandemic directly and so the magnitude seems about right.”

Federal support both for governments and individuals will be sorely needed as the pandemic continues to ravage the economies of the country and the state of South Dakota, said Nesiba, who is an economics professor.

“I suspect that this quarter’s GDP [gross domestic product] will be the worst we’ve seen since the Great Depression,” he said. “This is unprecedented to the degree that we’re pushing down on the brakes on the U.S. economy right now. This is going to be a really sharp decline. And it’s so important for the federal response to be right.”

While the full impact of the pandemic on state revenues isn’t yet known, business owners around the state have started sounding alarm bells, said Nathan Sanderson, executive director of the South Dakota Retailers’ Association.

“Mom-and-pop businesses operate with very thin margins; we’re talking, 3% to 5% thin margins, Sanderson said. “If they’re shut down for even a few weeks, much less three or four months, they’re gonna go out of business. I mean, that’s just the reality, especially if you’re looking at some small town businesses that are operating on those ultra-thin margins, they’re going to close.”

In a letter sent to Gov. Kristi Noem dated March 20, members of the South Dakota Retailers’ Association detailed some of the challenges they have faced barely a week into social distancing recommendations made by public health officials. The comments painted a bleak picture of the state economy,

Travis Anderberg, a pharmacist in Miller, said his business was down between 15% and 25%. His customers are going to the doctor less and stopping in less to buy gifts or gift cards, he said.

“And that’s the case across town,” Anderberg said in the letter. “The long-term effect is going to be huge for small towns because we’re going to lose those jobs along with those businesses.”

Rep. Karr said his biggest concern right now is making sure South Dakotans stay healthy, but he is also deeply worried about what will happen economically if the world takes too long to gain control of the COVID-19 pandemic.

“We have to get the economy going again because government just can’t afford that tab if the economy stays shut down,” Karr said. “Frankly, people need to be able to pay their bills and feed their families. The economic impact at some point, and maybe we’re getting close to that, will far outweigh the health concerns.”

Victory for tribes: Federal judge rules DAPL permits violated lawLakota response to COVID-19: Four days of prayer and ceremonyEvery step is a step in prayer: dancing to heal the nation