The exhibit has touched the hearts of many across Cheyenne River due to its deep historical and familial connection to the area.

On December 29, 1890, a Mnicoujou man named Red Hawk was one of over 200 unarmed men, women, and children who were killed by the 7th Calvary at Wounded Knee.

Red Hawk was from Cherry Creek and it was from his remains that the book was taken days after the massacre, according to a press release from the Wyoming State Museum.

The names of those illustrated are written on the drawings, and resulted in surprised recognition and an instant connection from exhibit attendees when they realized those depicted were their ancestors.

Throughout the exhibit, numerous narratives share information about Lakota life during the late 1800’s, giving a glimpse about painting techniques used by Lakota artists of that time period, and offer explanations of the different artistic roles which men and women played to create traditional Lakota art.

History of the ledger art book

In 1990, the original leather-bound ledger book was purchased by the Milwaukee Public Museum and included the following inscription:

“This book was captured from the Sioux Indians by Capt. R. Miller on Wounded Knee Creek, South Dakota Jan. 8th, 1891, and is a history of the Ghost Dance and the shirts worn by the Indians in the Ghost Dance. Was painted by a Sioux Warrior whose name was Red Hawk and is a correct History of the Book.” (Signed) Capt. R. Miller Rapid City, South Dakota.

In 1961, the Wyoming State Museum reproduced a small collection of prints from the ledger drawings, and were recreated in their original size, thus becoming the traveling exhibit.

Also in attendance was Valtina Little Shield of Cherry Creek. ______

The Wounded Knee Descendants Group also served lunch after the opening ceremonies. The exhibit is free to everyone and will be open until September 27. For more information, contact the Lakota Cultural Center at 964-2542. 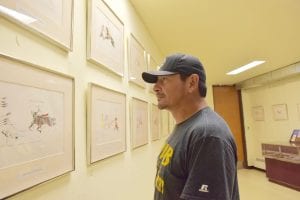 EAGLE PHOTO BY DARREL EAGLE STAFF Ferlin Carter of Eagle Butte takes in a scene depicting warfare with the Crow. 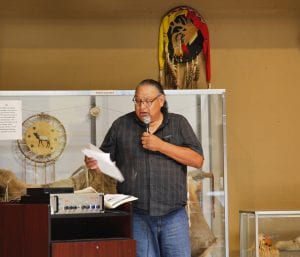 PHOTO BY DARREL EAGLE STAFF Heartbeat of Wounded Knee Descendants Chairman Manny Iron Hawk speaks at the grand opening of the art exhibit on Friday, August 2. Last month, Iron Hawk and a delegation of Wounded Knee Descendants traveled to Washington DC, and met with legislatures who introduced the “Remove the Stain Act”, which calls for the rescending of Medals of Honor given to U.S. Calvary soldiers who massacred over 200 unarmed women, children, and men at the Wounded Knee Massacre on December 29, 1890. 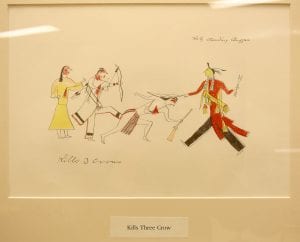 PHOTO BY DARREL EAGLE STAFF An art piece captures the moment a Lakota warrior named Holy Standing Buffalo kills a Crow warrior. Many of the art pieces on display at the exhibit are of war with the Crow and the U.S. Calvary. 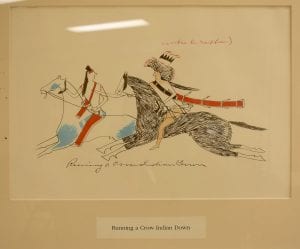 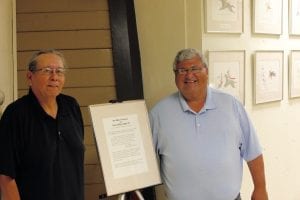