Foreign colonizers came to the land and brought with them diseases that the people had no immunity to, resulting in the death of hundreds of thousands. Then came the wars and forced removal of the people onto reserved lands. Then came the stolen generation of indigenous children who were forcefully taken away and shipped to boarding schools, where they were stripped of their identity and forbidden to speak their language.

This happened here in the United States, in Canada, in Central and South America, and it happened to the Aboriginal people of Australia.

Colonization has caused the global extinction of thousands of indigenous nations, cultures and languages. It is a harsh reality known all too well on Cheyenne River and throughout Indian Country.

How to preserve, revitalize and teach the language are questions that are asked in daily conversations among the people and on social media. These same conversations happen across the globe by indigenous people who face similar post-apocalyptic realities.

The United Nations declared 2019 as the International Year of Indigenous Languages, and in a quest to build relationships with Lakota nations, a delegation of Australian Aboriginal people visited Cheyenne River on November 7. 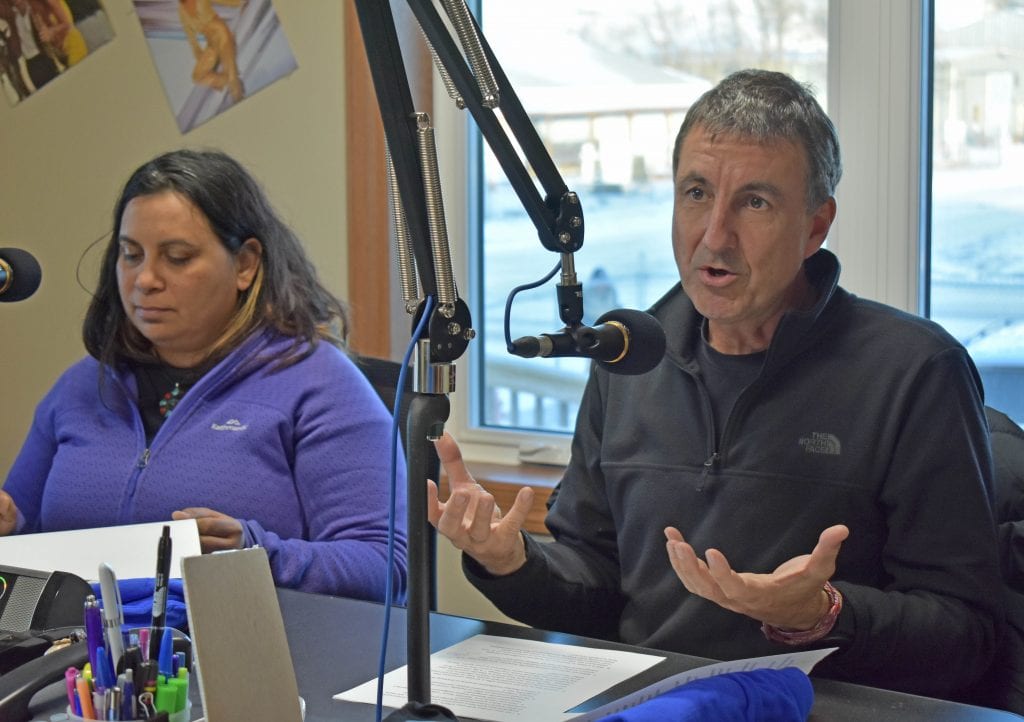 EAGLE PHOTO BY ALAINA BEAUTIFUL BALD EAGLE
Natalie Davey and Daryn McKenny speak during a live interview on KIPI radio in Eagle Butte.
The pair were part of an Australian delegation of Aboriginal language conservationists who visited the Cheyenne River Sioux Reservation on Thursday, November 7. The group met with CRST Cultural Preservation Officer Dana Dupris and discussed culture, history, and the different methods of conserving Lakota and Aboriginal languages. The Australian Aboriginal people have a history of forced removal, boarding schools, and assimilation, much that mirrors the postcolonial Native American history.

The goal of the visit was to create an international bridge between the Lakota and the Aborigine people, so that dialogue and knowledge-sharing about language conservation would begin.

Among the delegation were Cultural Attache and State Park Ranger Natalie Davey, Policy and Research Officer for the Australian Consulate-General Megan Watson, and language conservationist Daryn McKenny, creator of the Miromaa Aboriginal Language and Technology Centre in Newcastle.

Davey first introduced herself and gave some personal background. She said along with being a park ranger her work includes early childhood education. She is mixed race– Aboriginal and white, and said when the settlers first came, her grandmother knew six Aborigine languages, but now her generation only knows Creole, which is a mixture of native languages and English.

The need to learn and preserve aboriginal languages and the hope to reconnect with the land inspired her to become a ranger. Now she has daily interactions with tribal nations and helps educate visitors and locals about traditional teachings of the animals, the people and the land.

“There are different sacred areas throughout the country that hold deep meaning for the people. With the knowledge of the land comes respect and understanding. There are male and female areas and places where only certain families can go. There are five language groups and they are as diverse as people from river and desert regions,” said Davey.

With the loss of language comes the loss of knowledge, and Davey shared that traditional family roles have been impacted and largely forgotten. Families do not always look after the elderly, as they would have in the past, she said.

McKenny then introduced himself and said he comes from Newcastle, the second oldest town in Australia, an area which was hardest hit by white encroachment. In 2001, he and his friend identified as aboriginal, and this reclamation of identity was the beginning of his journey of reconnecting with his ancestral roots and language.

However, he soon realized that people only knew a few words of his language.

“We were living, but we didn’t understand the language, we didn’t know the water, the rivers, the land,” said McKenny.

Through research, he was able to find a book which had his people’s original language written in it. “We found a tool and started using the language,” he said. This sparked the beginning of language conservation and the founding of the Miromaa Aboriginal Language and Technology Centre.

“My work is bringing back languages from the worst possible scenario. We’ve been creating technology since the beginning. If someone puts a computer in front of me, I will use it to empower our people,” said McKenny.

“We must first start to reclaim the language, then empower the people. We set about doing it without outside linguists. Aborigine people are doing it themselves after decades of being told that they couldn’t do it,” he said.

For the past 10 years, he has worked with over 150 language groups from Alaska and Canada, including the Indigenous Language Institute in Santa Fe, New Mexico.

“My work has been non-profit. We are unique because we don’t say no to anyone. There are over 200 nations in Australia. We provide a platform of communication and exchange of information,” said McKenny.

Both he and Davey said that empowering indigenous people to lead language conservation efforts is crucial to successful revitalization. There is a spiritual and cultural connection that non-aborigine linguists cannot learn or earn through western certification, they said.

“In the past, outside linguists have said, ‘This is your language.’ The worst-case situation was when a linguist said, ‘I am your last fluent speaker.’ By empowering our people, we are reversing this. We’re undoing the mistakes that the academics have done in the past and rewriting our own language,” said McKenny.

Davey added, “Outside linguists came in but didn’t match the culture or the sounds and connection. Outside teachers come in and don’t understand native ways. For example, they don’t understand that I cannot discipline a two-year-old because he is my father. They just don’t understand.”

There are hundreds of aboriginal nations throughout Australia, and many diverse language groups, said Davey. In the past, some tribal nations standardized their language with a written alphabet, which originated either through missionaries or through tribal elders, or a combination of both.

Although having a standardized written alphabet is important to help teach the language, it comes with its challenges, said Davey.

“Standardization means kids will recognize words and letters and build on what they’ve learned, but it’s been challenging to standardize languages using the English alphabet. There are sounds in different dialects that are hard to translate, ‘U versus oo. P versus b sounds.’ Teaching the next generation to speak, read and write is really difficult, but it is important for the next generation,” she said.

“We cannot only rely on dictionaries. There has to be a connection to the language. There cannot be words without heart behind it. The spirit of the language versus being able to pronounce the words, because without spirit, the words have no meaning,” said McKenny.

He lauded the language conservation efforts on CRST, and cited the immersion school, tribal language department, and continuation of cultural ways as ideal methods that could be used in his home country.

Dupris spoke and showed the delegation some Lakota language books that he utilizes and constantly keeps with him. He also gave them copies of CRST Ordinance 66 and the Native American Language Act of 1990. 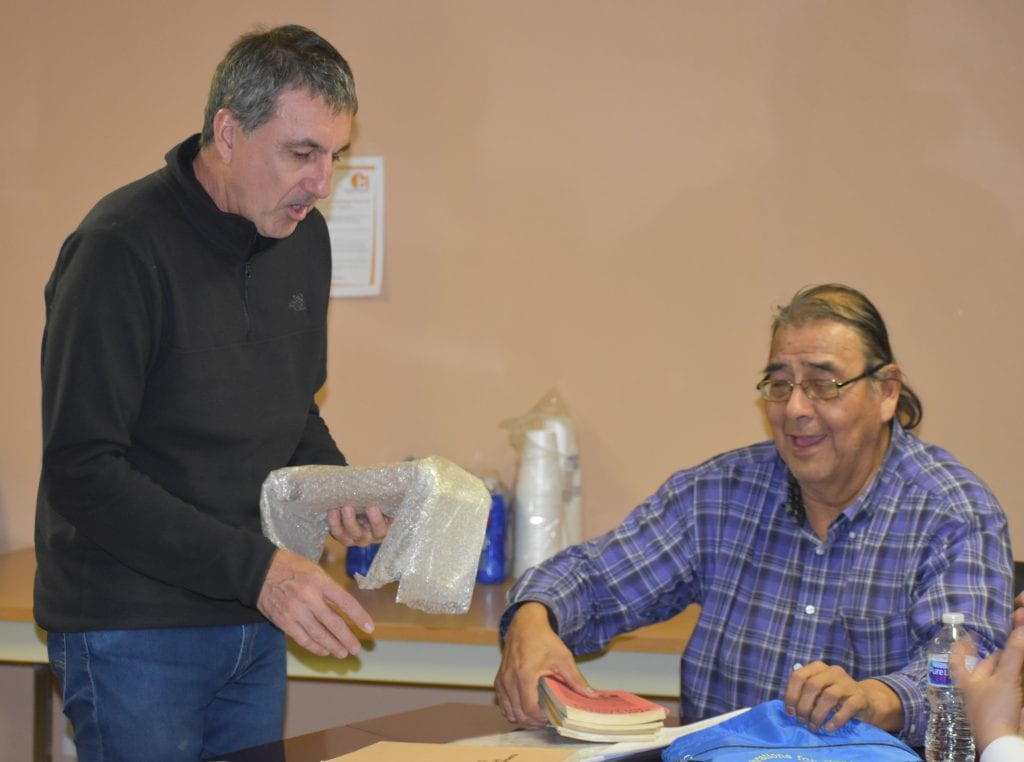 With time dwindling, the group, along with Dupris, visited the KIPI radio station for a live interview. On air, both shared their cultural experiences and journeys. Afterward, they briefly met with LOWI School Principal Manny Iron Hawk before making their way to the Standing Rock Sioux Reservation.

After he returned to his home country, McKenny shared more thoughts about the importance of saving indigenous languages.

“We don’t want preservation. We want conservation. Conservation is where our languages are allowed to continue to grow and thrive. And continue to play their part in allowing us to access the rich, deep knowledge which exists within, and to allow us to continue to be carers for our country, carers for our land, our environment and everything within that landscape. Our languages have a value far greater that’s being realized and they’re being undersupported. We need to lift and increase the efforts which are needed. I come from a position where our languages didn’t exist for 150 years. I don’t want anyone in the world to be in that position, but somewhere in the world, it’s happening,” he said.

For more information about the Miromaa Aboriginal Language and Technology Centre in Newcastle, visit www.miromaa.org.au.