Lakota winyan in action: bringing awareness to the oyate 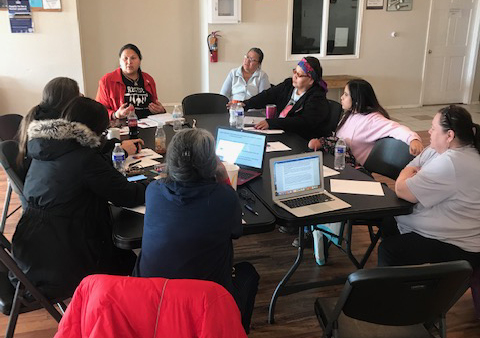 The Women’s Gathering happened at the Veterans Center in Eagle Butte on January 11.

On Saturday, January 11, Lakota women gathered for their second meeting at the Veterans Center in Eagle Butte to continue discussions about issues and concerns including human trafficking, safety awareness, self-defense and homelessness.

January is Human Trafficking Awareness Month, and the proposed Keystone XL Pipeline, which is scheduled to be built a few miles south of the CRST reservation border, has resulted in many voicing their concerns about the correlation of increased rates of violence and drug and alcohol use that result from oil man camps.

“Homelessness among young adults on the reservation has potential to create local participation in human trafficking,” said Gilbert.

Both Ziebach and Dewey Counties are two of the poorest counties in the nation, with high unemployment and poverty rates.

Gilbert said the women conducted an informal overview of laws that are in place on the reservation that protect women and children and shared that the group believes that “local law enforcement is inadequately staffed and trained to identify human trafficking.”

In order to help educate the public about the signs of human trafficking, the group agreed to create posters and a “whistle blower campaign to identify violence in our communities and those who are committing violence,” shared Gilbert.

Furthermore, the group hopes to speak with students at local schools to bring awareness to this topic.

At the first women’s gathering, that was held last month, presentations were given about defensive driving and what to do if you are being chased in a vehicle, said Gilbert.

Recently, there has been a rise in reports of motorists being followed and harassed on the roads, with some people even sharing stories of their daunting encounters on social media.

“The majority of women in attendance shared a personal story about themselves, a relative, or friend who has been harassed, chased, followed, or threatened in some way by unknown men while traveling on roads that are on and around our reservation border,” said Gilbert.

The group also talked about safety awareness and tips related to traveling.

The women invited Joye Braun from Indigenous Environmental Network to give an update on the proposed KXL Pipeline. Braun shared that there are 10 man camps being set up along the route of the pipeline from Montana to Nebraska, with four of those camps in South Dakota- one near Buffalo that could possibly house 600 persons; another one located 23 miles south of Opal, proposed to house 1400 people; another right outside of Philip to house 1400; and one outside Colome to house 600 individuals. 95% of these camps will house men between the ages of 20-40 years old, reported Braun.

The women’s group also met and asked Veterans Service Corps to teach self-defense and weapons-safety classes. Those classes will be available in the near future, said Gilbert, who stated that she hopes more people will become involved.

“We hope to see meetings like these happen all over our reservation,” she said.

The group plans to continue having monthly meetings with the next one tentatively scheduled for January 19 at the Veterans Center in Eagle Butte. For more information, you may contact Marcella Gilbert at 605-670-9853 or Dawn E. LeBeau at 605-200-2058.