Lakota response to COVID-19: Four days of prayer and ceremony 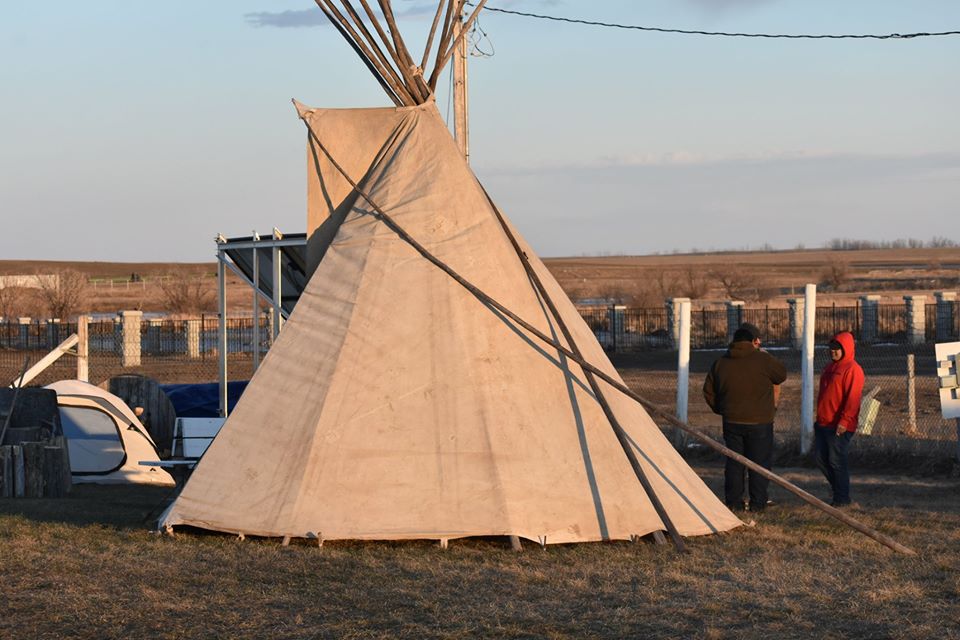 EAGLE PHOTO BY REMI BALD EAGLE
A tipi was set up at the powwow grounds in Eagle Butte. Daily visitors gathered to pray and give offerings to the sacred fire that was lit in a ceremony on Saturday, March 21. During the four days that the fire was going, people prayed for protection from the COVID-19 disease and for healing.

On Saturday, March 21, a sacred fire was built at the powwow grounds in Eagle Butte in response to the COVID-19 pandemic.

With many people in attendance, Chief Arvol Looking Horse, Keeper of the Sacred Pipe, performed the opening prayer while the sacred fire was lit. A tipi was also set up with an altar inside, a place for pipe carriers to bring their canupa and leave for the four days.

In a video from Ota Au Films, Karen Little Wounded, Center of the Camp Woman, said she and Looking Horse had been contacted a few days prior and were asked to organize the ceremony. As word spread about the gathering, support for the idea came from all over the reservation.

Little Wounded said other fires were being kindled all over Oceti Sakowin and that the fires were “for protection for all of us, for the Lakota oyate, Dakota and Nakota. You have the opportunity to come and lay tobacco down and pray for your tiwahe or your tiospaye and we really welcome you to do that. We’ll have fire keepers here. Bring your offerings. We’ll have the tipi up, and lot of beautiful young people here to help us carry this on,” she said.

In the video, Looing Horse shared the same sentiments about the ceremony and how others across the Great Sioux Nation are doing similar ceremonies.

The embers from the sacred fire were used to start a new fire in Bridger.

On the first day, people came to the powwow grounds with all kinds of offerings- wood, chokecherry juice, wasna, tobacco, cansasa and other medicines. Since then, there have been daily visits from people who have brought food and snacks to help feed everyone.

There are also various volunteers who have worked as fire keepers, with some people offering help in various ways- some have picked up trash around the area, some have brought or chopped fire wood.

Members of the Veteran Service Corps from Promise assisted with tents and fire keeping.

Eagle Butte resident Manny Red Bear shared how the ceremony impacted him. He said during the four days, he was “doing the ceremonies at 6 a.m., and 12 noon, and 6 p.m., and midnight.”

According to Little Wounded, everyon practiced social distancing during the four days of ceremony and prayer.

2021 Eagle Butte Hometown DaysRemains of 9 Lakota children who died at Pennsylvania boarding school are returned to RosebudNew mural welcomes visitors to Eagle Butte and proclaims: Mitákuye Oyášiŋ, “We are all related.”