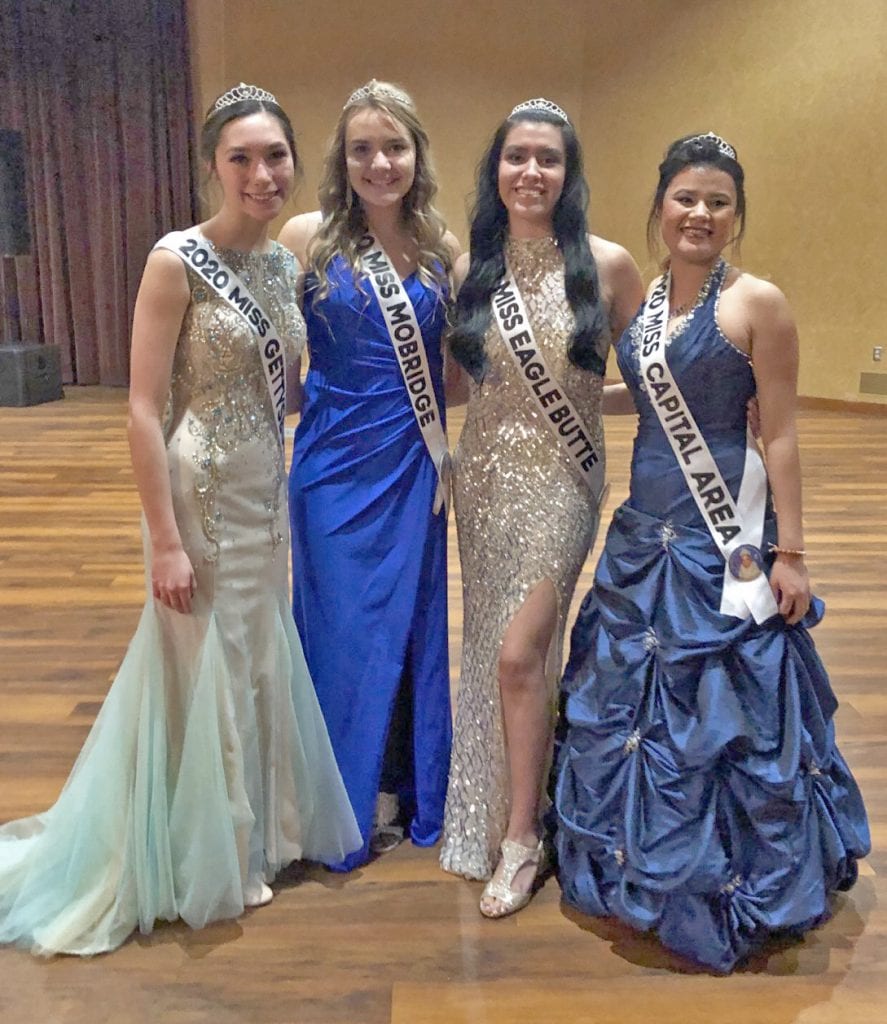 The annual South Dakota Snow Queen Festival was held from January 9-11, 2020, marking the 74th time this event hasbeen held in Aberdeen, South Dakota. The winner of this year’s pageant was Chesney Olson from Langford, but what was most notable was that there were four Witansna un can (young Lakota maidens) also competing and all had ties to the Cheyenne River Sioux Tribe.

These young ladies were Tiana Kohlus from Cheyenne-Eagle Butte High School, Alscessa Elsey from T. F. Riggs High School, TyRel Thompson from Mobridge-Pollock High School, and KiTu LeBeau from Gettysburg High School. Tiana was crowned Autumn Princess, and all four girls truly lit up the stage and represented their perspective schools, communities, and of course, their families well. More importantly, their combined presence at this historical event made the Cheyenne River Sioux Indian Reservation shine so much brighter too.

The young ladies clearly demonstrated not only the beauty and grace of a young Indian woman, but what the Cheyenne River Sioux Tribe has to offer the world. These girls were indeed the greatest ambassadors that the Tribe could have put forth to represent what the Tribe was and is, as well as what it will be.

Even though Tiana is involved in numerous school activities, she is a very reserved person and she believes her participation in the Snow Queen contest gave her a great sense of empowerment and confidence. She is planning to attend the United Tribes Technical College in Bismarck, North Dakota to major in Health & Wellness as well as minor in Nutrition.

Alscessa believed the pageant help tremendously with her self-confidence to be in front of large and small groups of people by being true to herself. She is currently undecided about which institution to attend this coming fall but once decided, she will major in Environmental Science & Renewable Resources.

TyRel’s mission was to participate with the objective to fully enjoy herself and make as many friends as she could to expand her life experiences. She has been accepted to attend South Dakota State University and will major in Ophthalmology.

With KiTu being shy, it took a lot of inter-strength for her step into this spotlight, and to her family’s surprise, she has gained so much confidence by competing in this contest that she is more than ready to attend South Dakota State University, where she has already been accepted fall semester 2020 to major in Early Childhood Education.

All these lovely young Indian women would agree that this event made them open up and overcome their immediate inhibitions as well as fears. With this contest giving them so much, they would also collectively encourage other young Cheyenne River Sioux Indian girls to participate in the future to hopefully be crowned the South Dakota Snow Queen. Past state Snow Queen winners from Cheyenne River include Mikaela Claymore in 1998 and Hannah Higdon in 2015.