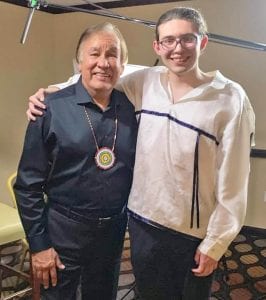 The Cheyenne-Eagle Butte Ohitika logo and CRST tribal flag were on display throughout the five-day imagineNATIVE festival in Toronto from October 22-27. That is where 2016 C-EB graduate and Dakota State University student Carl Petersen (Oohe Numpa) debuted his video game, Tipi Kaga, which means tipi builder in Lakota.

According to the imagineNATIVE website, the festival “is the world’s largest presenter of Indigenous screen content. The organization is recognized locally, nationally, and internationally for excellence and innovation in programming and is the global center for Indigenous media arts.”

Earlier this year, Petersen was awarded a Dreamstarter $10,000 grant from Running Strong for American Indian Youth, a program which was founded by Olympic gold medalist Billy Mills (Oglala Lakota). With this funding, Petersen launched his company, Northern Plains Video Design, and hired other Native game developers, voice actors, and translators to make Tipi Kaga into a game for distribution. Before receiving the Dreamstarter grant, the game was a prototype, said Petersen.

At the festival, Tipi Kaga made its international debut and users were able to play the interactive 3D game, which is narrated in Lakota by voice actor Carlton Buffalo. Players listened to Buffalo’s oral instructions, and with the help of English translations on the screen, they were able to build a tipi.

In the early stages of development, Petersen said he consulted with several CRST elders and fluent speakers about the game.

“I’ve had two Lakota elders, Emmanuel Red Bear and Carlton Buffalo, who worked with me at different points as cultural consultants and translators, and Carlton as voice actor. I’ve also talked with other elders,” said Petersen, who explained that part of the consultation was asking if a Lakota language-based video game was an appropriate.

“It’s been pretty much always a ‘yes’. I haven’t really had anybody say that this was a bad way to showcase the Lakota language and culture. This is very much meant to be as respectful as possible, and doesn’t have any baggage attached to it– just the language and a normal activity of creating a tipi,” he said.

There has been one criticism, said Petersen, who received an online comment from a person who stated the Lakota language should not be online and by making the language accessible, was contributing to non-native people stealing the language.

“For the most part, people have said, “Yes, we need it. We need it now,” said Petersen. That response is not suprising, given the alarming rise of endangered of indigenous languages throughout Native America. According to a report from South Dakota Magazine, only 18% of residents on Cheyenne River speak Lakota fluently.

What would drive a young man to create a video game voiced entirely in Lakota? Petersen said the answer is simple- there is not a way for people, especially for those wanting to learn Lakota, to interact with the language beyond one-word-at-a-time apps.

During the festival, another game which he contributed to titled, “When Rivers Were Trails,” was featured and Petersen served as a speaker sharing his experience as one of its creators. He also served as a panelist during the “Indigenous Learning Goes Interactive” portion of the event, and spoke on another panel about being an indigenous video game developer.

Although he was surrounded by the like-minded gamers, filmmakers, programmers and developers at the festival, Petersen said he did not receive constructive feedback he was expecting; rather, he got what he described as “super positive blanket support”, which he said was nice, but did not provide concrete feedback to which he could improve or change aspects of the game itself.

However, he said he has received feedback from the online gaming community, some of which has not been as supportive, perhaps, because the game does not fit the mold of western games, added by the possibility that there is not a cultural investment or connection with the Lakota language from those gamers, said Petersen.

“I have had a ton people imposing, people that I would want advice from mostly, people online who don’t really get what’s going on, who are like, ‘Oh, that’s not a game’ because it wasn’t what they were expecting. Within the field of indigenous game developers, it’s just been that blanket support,” he said.

Tipi Kaga is still a work in progress, and things may change or evolve differently, said Petersen, who acknowledged his team: Level Designer James Sierra (Oglala Lakota) and 3D Artist Meagan Zephier (Yankton Dakota), and that any changes to the game would be made within his team.

With the debut of Tipi Kaga, the Computer Science major has received a great deal of media attention from multiple news sources, the narratives of which have not always been accurate, said Petersen, who pointed out that many Native people have and are working in language preservation, and that his game is just a part of that larger and important movement.

“I’m not the first person who is trying to do something for the language. That’s kind of how the media has been portraying me. It’s very savior-like and I don’t like that. Whenever you’re working in your culture, in your language, you’re just a person trying to do something…You just got to try to do your best,” he said.

On Sunday evening, Petersen was back in Madison, ready to take on Monday’s class lectures and impending assignments. With creativity, vision and hard work, plans for Northern Plains Video Design is to continue making games in the Lakota Language. Tipi Kaga is just the beginning of that mission.

“Knowing your language is important to who you are and to your culture. It is a big deal. This is just one way to do that,” said Petersen.