KIPI radio off the air for restructuring project 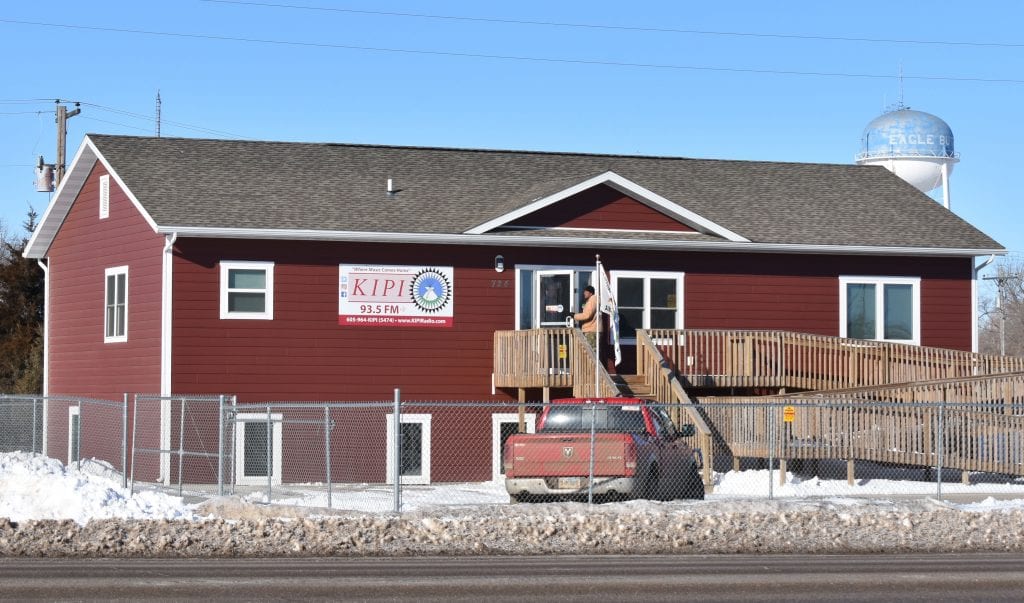 EAGLE PHOTO BY ALAINA BEAUTIFUL BALD EAGLE
The KIPI radio station is off the air indefinitely. The station is undergoing a restructuring project and there is no estimate on how long the station will be closed.

The bleeding cannot continue,” said CREDCO CEO JD Williams as he explained the reasons why the decision was made to close down the KIPI radio station on Monday, February 10.

After 16 months of being on air, the popular station ceased operations after experiencing months of financial woes. On February 7, the Cheyenne River Sioux Tribe released a statement about the closure, informing the public that “KIPI’s life cycle was assessed to review whether the first year’s revenue and expenses and future revenue projections were profitable. A business decision was made regarding an organizational restructuring plan to foster growth and accommodate a new strategy to become more profitable.”

News of the station’s closure was a shock to many people across Cheyenne River, with many questioning how long the radio would be off air, while others expressed frustration at the tribal business faltering.

April last year, CREDCO was assigned to oversee certain tribal businesses including KIPI.  According to Williams, part of that included monitoring the fiscal condition of the station while maintaining a relationship with KIPI.

“CREDCO was charged with oversight in April and our stance was, ‘You got your own board, you report to be successful’, so we took the position of ‘continue forward with the board that was put in place by tribal council’,” said Williams.

Then in December, CREDCO was made aware of a funding request from station manager Thom Eagle Staff.

“It became apparent that the cash flow had run out. Ad generation was not sufficient. The station ran into a negative cash flow situation,” said Williams.

He then explained that on December 15, there was no money in the station’s bank account “and a few days later, they were negative $60,000. CREDCO had to say, ‘Stop. The bleeding cannot continue.’”

When the station applied for a Federal Communications Commission license, the application was for a commercial operator license, and because KIPI was created as a for-profit business, it was not eligible for grant funding, as other Native American-operated radio stations in the state are.

100% of the income depended on ad revenue and sales generation-  the station’s business plan and business model failed, said Williams.

Eagle Staff explained that before the station was created, a feasibility study was conducted, and it heavily relied on tribal programs spending thousands of dollars on radio advertisements, which just did not happen.

“Tribal groups don’t advertise with us. They advertise with outside entities such as the Dakota Radio Group. Each tribal program has their own preference and they prefer to work with other radio stations,” Eagle Staff said.

Williams also noted that starting a new business, especially in an area that does not have a strong economy and is pierced with staggering poverty rates is no easy task.

“Our reservation is very poor. There are four businesses in downtown Dupree. And many of the businesses on the reservation are predominately white-owned. To start a brand-new business and take that first step forward, you have to know the risk, and we did not calculate all those factors and the plane crashed on us. It’s not so easy to rebuild a $2 million project that has crashed and burned. It was the wrong business model from the beginning,” said Williams.

FCC license and how the shutdown affects it

Both Eagle Staff and Williams said there is no estimate on how long the station will remain closed, although William shared that CREDCO has created a “bare-bones survival plan with a 3-month high-level marketing plan.”

But Williams caution people to be rooted in reality- that “at some point, the tribe has to evaluate the affordability of the radio station.”

According to Eagle Staff, he has contacted the FCC and they are aware of the situation.

“We go 10 days without being on air and the FCC is okay with that, but after 30 days, we have to notify them that we are off-air,” said Eagle Staff.

Williams shared his thoughts on the questions about how the closure would affect licensing.

“You don’t have money to drive your own car and you keep breaking down. You have no tires, and no gas, the license is your last consideration. You are not going to be driving that car,” he said.

What the future holds for KIPI

Two employees have already left the station after they were told of plans to cut back their hours, said Eagle Staff. Only he and DJ Eve remain with a few part-time employees, and the number of staff may reduce even more.

Williams said one of the ways the station can drastically cut overhead costs is to find volunteers and interns who would be willing to fill in the roles as DJs.

Eagle Staff also said he is looking into syndicated music and shows which would may also reduce operating costs.

Moving forward with the restructuring means being in survivorship mode, said Williams, who acknowledged the survival plan recognizes the social aspect that the radio brought to its listeners. Indeed, said Eagle Staff, who shared that since news of the closure, the station has been inundated with phone calls from people who shared their vocal support.

“The station is a means of communication that anyone and everyone can have. The general consensus from callers is that the radio filled a void that was not filled before,” he said.

In a candid moment, Eagle Staff shared that the future of the radio station may not have him in it.

“I wasn’t privy to the planning process between CREDCO, the tribal council and the chairman’s administration. Since I’m being left out of all the planning, maybe the plan is to replace me,” he said as he chuckled.

Williams said CREDCO’s stance is to advocate for transparency, and that starts with keeping the public informed.

“Our people, the public here, all need to know. There’s nothing to hide. It is the people’s radio. We want everyone to know that there is nothing negative except there is not money being made and we are revamping and trying to learn how we can generate money,” he said.

At the end of the over-the-phone interview, Eagle Staff shared the same sentiments.

“We are stepping back and taking a look at what we can do to generate funds. It’s just reorganization of a business plan and model that didn’t pan out,” he said.

Although there is no projected estimate on how long the station will be off air, Williams said he values participation from tribal members during the time of restructuring.

“KIPI is a great product for all the right reasons and CREDCO, along with the tribal leadership, is going to try to make it a success. We welcome input from the public.”