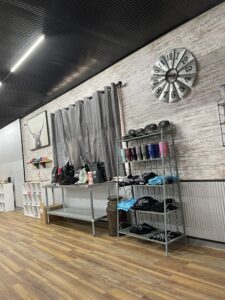 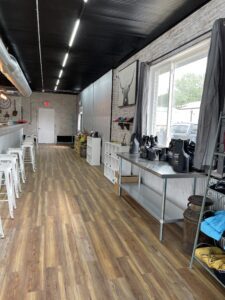 The shop moved to a new location at 225 South Main Street in August and opened for business on Friday, August 27. They were immediately slammed with happy customers. Kelsie Kay and her team are planning a Grand Opening Celebration for September 18.

Kelsie Kay always had a strong vision that Eagle Butte is a great place to start a business and a coffee shop was her goal, “because there wasn’t one at the time when I first started all of my [entrepreneurial] stuff. Keya Cafe wasn’t here. There was nothing here, there was absolutely nothing. So I just thought I could do it.”

She is committed to Eagle Butte as a great place to live and build a business, and doesn’t understand why people think it might be a hard place to live. “You can adjust your life to be here and be satisfied,” she says.

New life for an old building

Kelsie Kay is excited to welcome the community to the new building. “I think a majority of the community just wants to look at the building. Even though this building has been here forever, there’s so many people that have not been in here no matter what it was; if it was the fabric store, if it was the post office, the funeral home. It’s just been a building that nobody’s been in. And to be honest, even though I’ve worked a lot of places on Main Street, I was not in this building until I came to purchase it.”

Kelsie Kay had her eye on the new property, which is the old Luce Funeral Home, as long ago as 2012. It took until late 2020 for the deal to come to fruition. Her love of the building comes through.

“I knew I wanted it because of this corner door. It’s the primetime location. There’s a beautiful corner door on here, and I didn’t even mess with that. The door faces the southwest, it’s on the corner, and for handicap entrance we ended up putting a door on the south side of the building, because I didn’t want to mess with the front door,” she says.

When asked if she was nervous about expanding her business during a pandemic, Kelsie Kay said, “Not so much nervous…but I actually sat on it for a while before I even started looking for a contractor.”

The building has been completely renovated and brought up to code: new walls, redone bathrooms and water lines, new siding, insulation, space for coolers. Kelsie Kay says, “Everything in here is brand new, except the garage floor.”

Focus on the personal touch

Kelsie Kay began her love affair with coffee in high school and she also has a passion for retail. The two passions combine with a love of customer service in the coffee shop.

She continually works with her staff to improve interactions with customers. During pandemic they were limited to curbside pickup, which made it hard to spend time chatting with customers and making them feel comfortable.

She says, “The place we were in before was so small we were having to do curbside for everything, because there wasn’t enough room for people to be coming in, especially when there’s four employees in there. So we delivered every drink out the door.”

The new location allows for even more informal connections and a personal touch. “In the old space,” she says, “if you have an order, you have to get that order out the door, get back in, get your next order get out the door, get back in, get them their change when their card. You have to do to service with that one customer. You don’t have time to sit there and just say, How are you? How’s your day? You don’t get to do that.

Now when you’re face to face you can make drinks and see people. You can see your customers coming in, make sure they’re served, make sure their drink tastes good, make sure that everything was right for them. And then you can still be working as you’re visiting.”

The fact that Kelsie Kay and the staff take the time to get to know customers shows in all the 5-star reviews the shop has received on Facebook.

Kelsie Kay also focuses on getting quality ingredients for her customers. The coffee shop uses espresso beans that are roasted in nearby North Dakota. They serve up a variety of hot and cold beverages including coffee, tea, hot chocolate, infused waters, lemonade, Advocare meal replacement shakes, mainstream canned energy drinks and Italian sodas.

Even with the renovation there is no kitchen, because Kelsie Kay is clear that she wants to be a coffee shop, not a restaurant. The shop will eventually feature grab and go lunches, salads, soups and sandwiches. She wants to focus on things people can pick up to eat in the shop, on the run, or back at the office.

She says, “Even with as much room as we have in the new space, with the amount of drinks we push out through these doors, there’s no room to cook!”

As a small business owner and a woman entrepreneur, Kelsie Kay is committed to increasing her skills and education. She took classes through Four Bands Community Foundation as a startup and founded the business in Four Band’s incubator space.

In addition to expanding her business, Kelsie Kay is a committed lifelong learner. She is a full-time college student taking classes at Oglala Lakota College. She’s taken Tribal Law, Tribal Treaties, and Personal Finance. Right now she’s taking computer classes and she shows up for every marketing or business offering possible at Four Bands so she can improve her business skills and service to her customers. Like all entrepreneurs, she struggles not to spread herself too thin.

When she isn’t getting locals to be coffee connoisseurs, she is a single mom to her son, Justin, and does ranching and beadwork to contribute to the success of her family. You can follow Kelsie Kay’s Coffee Depot on Facebook and Instagram.