On Thursday, June 17, President Biden signed the “Juneteenth National Independence Day Act” into law. The Act previously unanimously passed the Senate and passed the House by a vote of 415-14. Rep. Dusty Johnson voted in favor. The 14 against were all Republicans. 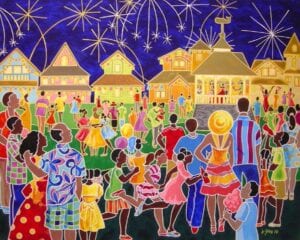 “Juneteenth at Oak Bluffs is about a celebrating Juneteenth at a resort town in Martha’s Vineyard. This had traditionally been an area where people of color could go and spend time relaxing, just being themselves,” said artist Sonia Lynn Sadler of her painting on Scratchboard.

In her essay, “What Wal-Mart Doesn’t Get about Juneteenth,” Kaitlyn Greenidge says, “One of the powerful things about Blackness is that it undermines the idea of borders and complicates the dream of nationhood. These complications are part of why studying Black history is considered by many to be so dangerous.”

Greenidge goes on, “They are why we are in a nationwide moral panic about the possibility of children learning critical race theory. The varied regional histories of Emancipation Day celebrations are a reminder that freedom in this country has never meant the same thing to everyone, has definitely never been experienced the same way and has always been conditional.”

Texas made the holiday a state holiday in 1980. Since then, 49 states and the District of Columbia recognized Juneteenth. The last holdouts were South Dakota, North Dakota and Hawaii.

Hawaii recognized Juneteenth earlier this year. The Argus Leader reported that Ms. Akiemi Glenn, the founder and executive director of the Popolo Project, said the holiday is a way to honor that Hawaii’s Black people are “here and we’re a part of Hawaii.”

Glenn said the holiday is a reminder of how an economy built on the exploitation of people can change. She said there’s a tendency for Black people to be treated as “perpetual foreigners” in Hawaii despite their presence dating back to the 18th century.

According to the Census Bureau, Black people make up 3.6% of the Hawaiian population, as opposed to 10.1% Native Hawaiians. Similarly, South Dakota’s population is 2.3% Black and 9.0% Native American. The first black person arrived in South Dakota in the 19th century.

Juneteenth is the first federal holiday to be added to the calendar since Martin Luther King Jr. Day in 1983. State governments, including South Dakota, and corporations around the country quickly followed the example of the federal government and gave employees the day off on Friday, June 18. Governor Noem spent the holiday celebrating “Czech Days” in Tabor.

At the signing ceremony, President Biden said, “I have to say to you, I’ve only been president for several months, but I think this will go down, for me, as one of the greatest honors I will have as president.” He said, “I regret that my grandchildren aren’t here, because this is a really, really, really important moment in our history. By making Juneteenth a federal holiday, all Americans can feel the power of this day and learn from our history — and celebrate progress and grapple with the distance we’ve come (and) the distance we have to travel,” Biden said.

The irony of creating a new federal holiday while so many large questions about race remain unchanged was not lost on activists and allies. Front-line workers, often BIPOC, did not get the day off. Black prisoners were denied access to courts due to the holiday, forced to remain incarcerated for an additional day. Retail giant Wal-Mart offered Juneteenth-themed merchandise but did not give employees a paid holiday.