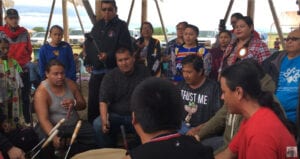 EAGLE PHOTO BY ALAINA BEAUTIFUL BALD EAGLE The Cherry Creek Singers perform the NoDAPL song in Ft. Pierre during the Water Protector Wopila Wacipi in 2017. The song became the anthem of the NoDAPL movement and remains one of the most popular and beloved songs in Tribal nation’s fight against oil pipelines.

A federal judge in the District of Columbia ruled that the Dakota Access Pipeline must be shut down and be emptied of oil by August 5 pending an extensive environmental impact review by the Army Corps of Engineers. Judge James Boasberg’s 24-page ruling is connected to his earlier ruling in April regarding the environmental review, and this current decision is subject to appeal.

Energy Transfer Partners have already said they are going to file a motion against this in order to continue operations, and if that fails, to appeal to a higher court. This ruling flies in the face of President Trump’s push for oil pipelines. His taking down of various environmental laws has been in support of big business, allowing them to operate with fewer restrictions. Despite the President’s assurances, the Atlantic Coast Pipeline, whose planned pipeline under the Appalachian Trail drew many protests, issued a statement saying that they will close entirely.

Many opponents of the Dakota Access Pipeline are celebrating this decision by the District Court. Chairman Harold Frazier of the Cheyenne River Sioux Tribe said, “I applaud the actions of the US District Court in finding what we knew all along, that this pipeline, like many actions taken by the US government, is in fact illegally operating.”

While Energy Transfer Partners argue that stopping the pipeline will cost state, local, and tribal governments to lose billions of dollars, the tribes have contended that any spill under the Missouri River would contaminate drinking water, poison fish, and pollute the river along its length. They point to the safety record of the pipe itself as proof of their allegations.

The pipeline itself has been leaking in several areas along its route, the most recent spill of significant size occurring in November of last year where over 383,000 gallons of oil spilled in North Dakota. There have been at least 10 spills since its opening in 2017, the smallest was 20 gallons in North Dakota and a spill of 168 gallons in Illinois.

“The Court does not reach its decision with blithe disregard for the lives it will affect,” Boasberg wrote in the decision released Monday. “Yet, given the seriousness of the Corps’ NEPA (National Environmental Policy Act) error, the impossibility of a simple fix, the fact that Dakota Access did assume much of its economic risk knowingly, and the potential harm each day the pipeline operates, the Court is forced to conclude that the flow of oil must cease.”