Cheyenne River’s own Joye Braun was highlighted in an opinion piece Newsweek magazine on Feb. 1, 2021 by Aimee Allison, founder and president of She the People and Newsweek columnist. 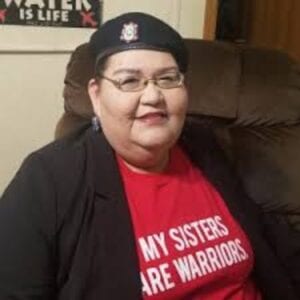 The article cites Braun as part of environmental groups, landowners and several Native American tribes who came out in opposition. Braun says the success of the order was not through her work alone. “It was the result of many people working together through prayer and perseverance.”

Allison says, in part, “Braun is a member of the Cheyenne River Sioux Tribe and front-line organizer with the Indigenous Environmental Network. She is a wife, mother and grandmother. Braun was the first camper at Standing Rock and stayed until forced eviction in February 2017, spending 10 months on the ground. She has fought tirelessly to protect her own homeland against the Dakota Access Pipeline and the Keystone XL pipeline, while supporting threats of uranium and gold mining in the Sacred Black Hills. She is the Indigenous Environmental Network’s Keystone XL campaign organizer.”

She the People is a non-profit organization “creating the politics we have not yet seen” for Black, Indigenous, Latina, Asian American Pacific Islander women of America. Congratulations, Joye! 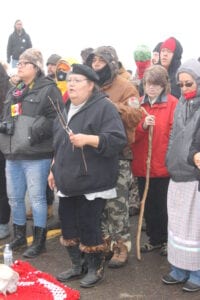 Joye Braun, a Cheyenne River Sioux organizer with the Indigenous Environmental Network, prays with other water protectors at the frontline camp off North Dakota Highway 1806. Oct. 26, 2016 Photo by Derrick Broze for Mintpress