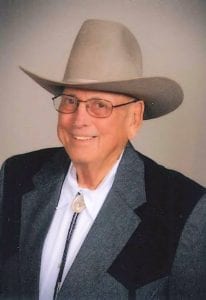 John Ord Wall was born November 24, 1930 at Gettysburg, SD to Joseph Bertie and Ella (Geist) Wall.  He attended country grade school in Ziebach County near Dupree, SD.  He attended school at Brookings, SD receiving an Ag Degree.  He returned to the Dupree area where he and his brother started an earth moving business and began building dams.  John loved flying and between the two they did not own a car but had a plane for transportation.

On August 10, 1950, John was united in marriage to Mildred Anderson at her parent’s home in Brookings, SD.  To this union three children were born: Ann, Dan, and Joseph.  Together they bought a farm in Glad Valley, SD where they farmed and ranched.  While in Glad Valley, John and Jean came to live with them.  They moved to Eagle Butte in 1966 where John taught welding.  He later began working for Public Health Service in construction inspection and then as maintenance for the City of Eagle Butte until retiring around the early 1990’s.  In 2009, Mildred and John moved to Chamberlain where they made their home near their son Joseph and wife Cynthia.  Mildred passed away on June 10, 2012.

John was united in marriage to Helen Kulhavy Rosenberger on December 6, 2014.  They made their home on a farm south of Pukwana.