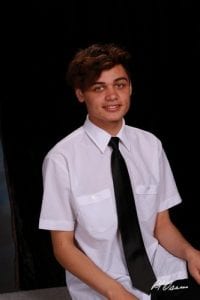 Jasper was born December 6, 2001 in Pierre, SD to Jamie Keiderling-Pesicka and James Pesicka. Jasper was the oldest of his siblings: Alliya (16), Matthew (14), Isaiah (9). Jasper spent his first four years in Dupree, joining his mom for high school proms, playing in his sandbox, enjoying his pets, and spending lots of time with loved ones. After moving to Spearfish, Jasper attended the Little Jackets Learning Center, West Elementary and Creekside Elementary. Jasper made many friends in Spearfish and touched many hearts. After returning to Dupree, Jasper attended Cheyenne Eagle Butte Elementary and Junior High Schools. During his eighth grade of school, Jasper decided to join the Windswept Academy where he would finish his junior year and begin his senior year. Jasper found his home at Windswept Academy, and made many friends who cared about him deeply. Jasper is celebrating his graduation in heaven with Our Savior, and no longer has to imagine what heaven is like.

When he was a baby, everyone would stop to talk about his big, hazel-blue eyes and they would talk about those eyes until he died. When he was a year old, he would sing Twinkle-Twinkle Little Star with whoever was holding him, mostly his mother. He was only practicing singing with angels, and now is singing for Jesus. Jasper always wanted to be outside exploring the world. He often spent his evenings at parks and riding his bike or skate board. He often stayed the night with friends. He was always a funny kid, and made up games like “Get off my ship or I will throw you off,’ where he threw Matthew off the couch and broke his toe. Jasper always had a camera to capture his adventures. He would make an adventure of everything, even his trips to the dump ground in Dupree.

As a teenager, Jasper was so fun to be around. Never more than a few words came out of his mouth without some wit, jokes or humor. His sister was his best and closest friend. They would spend hours just laughing and being together. Nearly every time Jasper and Alliya would talk, they would say the exact same thing in sync. Jasper and Alliya would sing Queen music together in perfect harmony. He loved his travels with the Kanour’s and Frieberg’s, because he could try every kind of food he could imagine. Jasper would climb out his window at night to go walk around town, as if the front door was guarded. His excuse was that he did not want to wake everyone. Isaiah wants to be just like Jasper. He would spend hours staring at Jasper and Jasper would say “why are you always staring at me.” Every kid admires Jasper so deeply.

At school Jasper was Student Council President, Honor Squad member, Yearbook staff member, a faithful student, a community servant, a role model to all and a best friend who would never let anyone be sad. Jasper was always annoyed that every time he walked into a room, everyone looked at him. He truly lit up the room. He was so cool and popular and he did not even have a clue either. He was a blessing and honor to be around. He will be remembered at schools for his acts of kindness towards all of the students, and those above him. Jasper could run like a deer. Isaiah would call him a Llama because he was so tall.  Jasper had a servant’s heart. Everyone felt welcomed by Jasper, and he was a great example to the children at Windswept. He made everyone feel so great and loved, and impacted the lives of his friends and family. He is someone anyone could talk to and it would put a smile on their face. Jasper would make you laugh, even if you didn’t want to. Some would say he is the light of many people’s lives and an example of a true hero… the kind that doesn’t wear a cape. The only rule Jasper would break at school was dying his hair purple, and hoping Mrs. Anne would not see. Jasper was an articulate and respectful student. He was a diligent student, and worked so hard to maintain straight A’s. Jasper’s closest friends were the other students at Windswept Academy. Another big part of Jasper’s life was Impact Youth, where he would slide down the church isles in his socks. Jasper was forever sliding around in his socks, and we all imagine him sliding through heaven’s pearly gates on streets of gold.

Jasper was excited to go to his senior trip; life was an adventure waiting to happen in Jasper’s mind. His classmates will be thinking of him while they go and have new adventures. He was excited and nervous about his future. Jasper wanted to do everything. He talked about going to aviation school, joining the armed forces, and become a journalist. He also talked about moving to Hamilton, Virginia with the Freiberg family, to attend college. Jasper hoped to watch the sunset at the beach and to skydive with Mr. Sharp. Jasper loved to have bon fires, even in the wind. He wanted to have many more before summer was over.

Many are so thankful that he was put into their lives while he was here. There are people in your life who make you want to do better and be better, and Jasper is one of those people. Jasper was a best friend to many, and will be missed terribly.