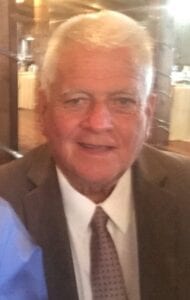 James R. “Jim” Hood, 73, of Marshalltown, formerly of Dupree, SD, passed away at home with his loving family at his side on Friday, August 14, 2020, under the care of Iowa River Hospice. To honor his wishes, cremation rites have been accorded.  A memorial service will take place on Saturday, August 29th at 3:00 P.M. at Calvary Lutheran Church in Irene, South Dakota. Private family burial will be held at a later date. Public visitation will be held one hour prior to the service, beginning at 2:00 P.M. Memorial contributions may be directed to the Pulmonary Fibrosis Foundation in Jim’s memory. The Mitchell Family Funeral Home in Marshalltown, IA has been entrusted with caring for Jim and his family. For further information or to send his family a condolence, please visit mitchellfh.com or call 641-844-1234.

James Robert Hood was born on May 1, 1947 in Sioux Falls, SD, the son of Robert and Ruth (Lynum) Hood.  He grew up in Irene, SD and graduated from the Irene High School. He earned his Bachelor’s Degree in Education from the University of South Dakota in Springfield, SD. Jim was a teacher, a coach and an athletic director at Dupree, McIntosh, McLaughlin, and Irene schools. During his career, he had taught industrial arts, physical education, driver’s education, coached football and basketball; and, he had been an athletic director. He was an avid sports enthusiast and was a member of the South Dakota Coaches Athletic Association. Often, he could be found golfing or working in his shop.

In eternal life, Jim has been reunited with his parents, Robert and Ruth.