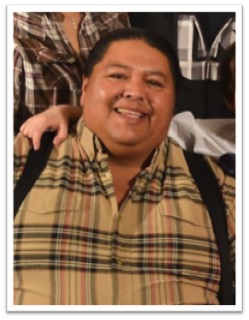 Jim, known as Jimmy to many,  grew up in Armstrong County at the Clark Ranch with his grandpa Dale and grandma Dorothy, and later lived in Bismarck, North Dakota and Glasco, Montana. Throughout his life, Jim held many positions, most of which centered on helping his Cheyenne River community and honoring and uplifting Lakota culture and traditions. Among his greatest passions was ranching, a role he shared with his son’s Dale and Seth. Jim was a trained EMT and a heavy equipment operator working across the midwest and on the Cheyenne River water project, and he served as director of the H.V. Johnston Cultural Center, director of the Cheyenne River Sioux Tribe Cultural Preservation Office, and board member of KILI Radio.

As a kid, Jim was active in rodeo. One year at the high school rodeo in Mobridge, he proudly came home with three buckles for roping, bulldogging and all around. His love of horses was part of who he was, he named his Mulligan. When everyone else purchased cars with their Sioux benefits, Jim bought a horse and a dog, the perfect choice for a man who would just as soon ride across the open prairie than be confined to the roads that cut through. In high school, the American Indian Movement was happening and one day, the school called telling his friend’s dad that he was not in school, his friend’s dad called Carol and they went looking for Jimmy and Jess. They found them walking in Parade, when they asked them where they were going, they said they were going to get their horses, then heading to Wounded Knee to join the movement. He loved helping his grandpa Dale on the Clark Ranch growing up and shared numerous stories of life on the Clark Ranch growing up. Jim, excelled as a football player and a wrestler in high school.

When Jim learned of the lakota way of life, he honored the traditions. Jim was fortunate to wiwangwaci when he was young and all of the lakota men who had participated at that time were important role models in carrying on our lakota way of life. He shared his gifts of prayer with his children and grandchildren and traveled with them to support the prayer circles being held for the oyate.

Jim came from a large blended family and it would take a book series to name everyone he has loved throughout his life. He welcomed his daughter Michelle in 1984.  She won his heart and would visit every chance he got. Jim had a fierce love for his wife, children, grandchildren, family and friends. In 1985 he met his Hasanni tawa Sylvia and adopted her daughters Dawnee and Heather Rose LeBeau and loved them each as his own. When Jacque was little she went to live with Jim, Sylvia and the kids in On The Tree, they had so many great times together and she loved helping Jim with the horses and hunting with him.

In 1988 they had Dale James and then in 1989 they had Seth. They lived in the No Heart community and then moved to Sans Arc Valley and have lived there since.

Jim and his brother Bill received their Lakota names in 1993 from Hunka Ate’ Romanus Bear Stops. The ceremony was celebrated and witnessed by the community during the CRST Wlac’ipi. They gained another family and have appreciated their teachings and support since then. Jim was also a member of the Itazipc’o Singers and they traveled across turtle island to sing.

On September 21,2004, the Grand Opening Celebration of the Smithsonian National Museum of the American Indian was the event of the year.  Jim gathered students and chaperones to participate in this historic event for the Native Americans.  It was a memory that is still cherished by the students, when they see him they greet him with a smile.  This gathering filled the lawn of the National Mall with every Tribe in the world.  The Parade was grand.

When his son Seth moved to New Mexico to attend the Institute of American Indian Arts in Santa Fe, Jim and Sylvia made sure to drive across Turtle Island to visit him as often as they could. Jim loved telling everyone about Seth’s art. His eyes lit up when he spoke of Seth’s gift of being an artist. When Dale enlisted in the Army and was stationed in Fort Knox Kentucky for Basic Training, Jim and the entire family traveled to attend his graduation and honor his accomplishment. After, when Dale was stationed in Texas, Jim and Sylvia made sure to go visit him every chance they got. Jim was extremely proud of Dale and his service to the country, and when he was deployed to Afghanistan Jim and the family connected via phone and Skype often. When Dale safely returned home, the family welcomed him back with a ceremony and Jim invited everyone he knew to honor his son. Jim and his son’s sang many songs together at family and community events.

When his grandkids had events, Jim made sure to be there. He would tend to his cattle and then meet his daughter Dawnee, and together they would drive to the next basketball or football game. He especially loved attending the C-EB games when his son’s and grandson’s Ashten and Kippi were on the court and on the field. Anjali, Preslyn and Aysah were Lala’s girls, they shared many meals in Lala’s spot at the table on his lap and Lala taught them so many things, recently he taught them how to make bottles for Benny the calf and they learned his feeding schedule. When Kylena, Zacharia or Khrissa had an event in Washington state, Lala and Unc’i Sylvia would jump in the pick-up and drive to them as much as they could. Jim was especially proud of each of his children and grandchildren and he made sure they knew.

On November 24th, 2012, Jim and Sylvia bought 21 head of “Clark” cows and began ranching in Armstrong County on the Cheyenne River Reservation. In addition to his lifelong passion for ranching and horses, Jim loved riding his motorcycle, his other horse. He and Sylvia rode many rides with his brothers Billy (Patty) and Jeff (Kay) and they have numerous cherished stories to tell. He cherished teaching his children about everything he could, and made sure that everyone who visited his home left with food in their bellies and a warm hug, the kind that would stay with you long after you had left. Jim had a kind and welcoming smile, an easy laugh and an incredible sense of humor. He had an energy that invited you to sit down and visit awhile. He would talk and he would listen. He enjoyed visiting with everyone, and if you were lucky enough to be one of those people, you always came away having learned something and with a feeling like you were better off than before you sat down. To sit with Jim at his dinner table, around the drum, or around a fire was to feel at home and part of something special. Jim traveled to many places throughout his life and everywhere he went he would make a friend, and most of the time those friends became family. He valued people for who they were, took the time, and gave everyone a chance.

Jim was active in the NODAPL movement, committed to protecting his people’s ancestral lands and water. He was grateful to travel to standing rock in August 2016 with his brother in law Leon Reddog, his son Seth Picotte and Parvannah Lee. He was a strong leader and presence at the Itazipco camp at Standing Rock, where he and Sylvia would spend long days and nights. He took Sylvia and Parvannah to participate in the Water Ceremony in June to join all the other women who had gathered to pray and walk to the site of the proposed line for the pipeline.

In November 2019, tragedy struck when Jim suffered a stroke. He was cared for at the Indian Health Service in Eagle Butte by a compassionate doctor who told him he was his friend and would take good care of him. He then asked the Doctor to put his boots on his feet, who honored his request. That small gesture made him happy.  He was then flown to St. Alexius Medical Center in Bismarck, North Dakota. At St. Alexis, he became pals with Nurses Saudia, Antoinette, Darcy and Greg. Sylvia, his children and friends changed their schedules to offer care to a man they loved dearly and were grateful to see him make progress daily. Jim’s nephew’s Thomas Three Legs and Frankie Blue Coat were asked to help Jim tend to his cattle and they generously offered their time and energy.  They formed a close bond during this time and Jim spoke very well of each of them and said they could be his sons. Two young ranchers in Armstrong, Jeremy Means and Chris Reeves also offered to help Jim and this served as a wonderful reminder of what neighboring means, Jim was very grateful to Jeremy and Chris.

Sadly, on April 28th, Jim was driving home from his ranch and lost his life here on earth in a tragic car accident and journeyed on to the spirit world. Many relatives across Turtle Island expressed their immense love for Jim, offering prayers, songs, nourishment and condolences.

The meal will be a “to go” take out style meal due to COVID19.

Traditional funeral services will be held on Tuesday at 12 noon mdt at their home in Sans Arc Valley (Hinhan Wakpa’) with burial to follow at Laplante Cemetery beside Grandpa Dale.

The family is requesting attendees to wear a mask and gloves and honor COVID19 protocol, in concern for your health and others. Pila’mayaye/Thank you.

In compliance with the CDC Covid19 regulations and the CRST Tribal Directives for mortuary care, a private traditional funeral service for family only will begin at 10:00 AM, Tuesday, May 5, 2020 at the Picotte Residence in the Sans Arc Valley (Hinhan Wakpa’).  Burial will follow at St. Paul’s Episcopal Cemetery at LaPlante, SD next to his Grandpa Dale.