Jakways Mendoza among BHSU students honored for volunteerism and service 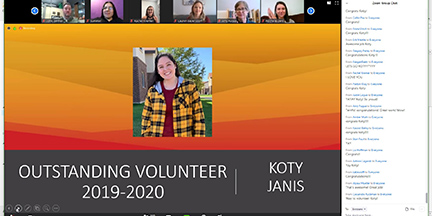 Koty Janis, psychology major from Pine Ridge, was named the Black Hills State University Outstanding Volunteer during a live awards ceremony online in April. Janis is President of the Lakota Omniciye student organization, a member of the American Indian Science and Engineering Society at BHSU, and planned the cultural gift exchange with Red Shirt School on the Pine Ridge Reservation. More than 100 BHSU students participated in the 28th Annual Student Volunteer Awards ceremony which was held online for the first time due to the COVID-19 pandemic.

More than 100 Black Hills State University students, plus faculty, staff, and administrators, gathered virtually for the 28th Annual Student Volunteer Awards Ceremony. The pandemic, which has kept students off campus, did not stop BHSU students from gathering online last week to celebrate the achievements of their peers.

Dr. Erica Whitiker, associate director of the Student Union and Campus Activities, said the transition of the event to an online format due to COVID-19 was well received.

“There were over 1,000 chat messages during the event of attendees congratulating and cheering each other on,” said Whitiker.

Whitiker noted that having families of students, faculty, and staff involved in the event this year from their home locations was especially exciting.

“The Student Volunteer Awards are meaningful not only to students, but to our university as a whole,” said Whitiker. “The Awards are a time to say thank you and celebrate the contributions of our students, faculty, and staff, who make BHSU an amazing place to learn, live, and soar.”

BHSU has more than 100 student clubs and organizations. Students are encouraged to fill out an interest formonline or connect on the BHSU Campus Activities Appfor updates. In the fall and spring, BHSU hosts a Student Organization Fair with food, prizes, and music to allow students to explore the many clubs on campus.

Outstanding Advisor:Staff member Kimberly Talcott for her work with Newman Club and BHSU Students for Life

Board of Regents Award for Academic Excellence:Jacket Investment Club

Board of Regents Organizational Leadership Award:Enactus

Outstanding Member named by the student president of each club/organization: