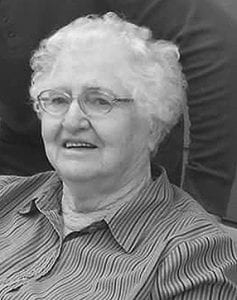 Irene grew up in Eagle Butte.  She attended Fox Ridge School and graduated from Eagle Butte High School in 1950. She went to college in Spearfish at Black Hills State College and obtained a teaching certificate.  She taught school at the Zeona country school from September 1951 to May 1952. Upon completion of her year contract she returned to Eagle Butte.

On August 28, 1951, she married Edgar John Berndt in Pierre, SD. To this union of 49 years, 5 children were born:  Karen, Leann, Russell, Evelyn, and Bill. Irene was blessed with 19 grand-children and 20 great-grandchildren and many nieces and nephews.

Irene worked at Lynn’s Super Value as the manager of the Bakery and Deli from September 1978 until March of 1990. In August of 1990, she went to work at the Cheyenne Eagle Butte middle school as a kitchen assistant. She retired in 2003 from the school system.

Irene had many hobbies including baking cookies for the special people in her life, collecting her precious teapots, and decorating her home for Christmas. She got no greater joy than to see the community drive by and check out her Christmas decorations. Everyone knows the green house with all the lights on highway 212.  Irene was an excellent cook and knew every-one’s favorite meal and when they arrived at her home, it was ready to be served.  Mashed potatoes required a minimum of 1 pound of butter.

While employed at the school, she entertained the children with her decorative necklac-es. She always had kind words for each child she served at the school. She loved to see their smiles each day. Irene was a natural caregiver who was always willing to help family and friends in need. She spent many hours at the Napa store assisting Bill with running the store. Irene was an avid reader and was constantly reading with mystery novels being her fa-vorite.

A memorial has been established.

Condolences may be sent to the family at www.kinkadefunerals.com.