“I’m Black, Native, gay, and I’m proud”: Fentress LeBeau shares his story about being a minority among his people

Much can be said about Fentress LeBeau — with his energetic wit and bright smile, he can light up any room. Standing 6’ tall, with his hair in long braids, Fentress makes no effort to hide his chin strap beard, even as he wears glittery eyeshadow and vibrant lipstick.

By just being himself, the 20-year old Eagle Butte resident unintentionally draws attention, which sometimes results in negative and violent responses from others.

After years of suppressing his feelings and finally being confident with his identity, Fentress said he is ready to bring awareness to the two-spirit community on Cheyenne River, a sensitive topic that is not usually talked about openly; however, it is matter of great cultural significance that must be addressed, said Fentress. 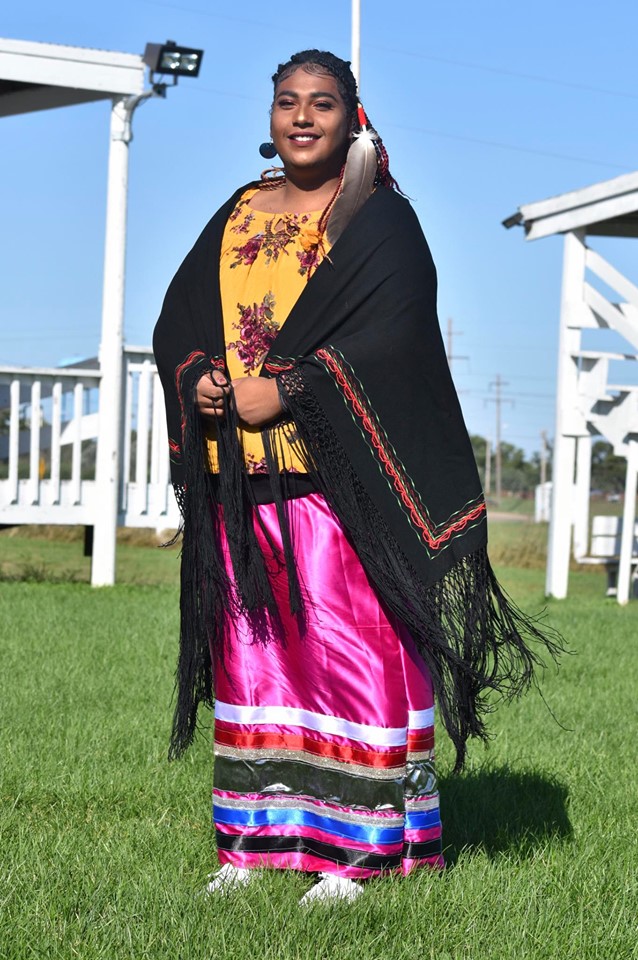 Fentress is the son of Amber LeBeau, a Lakota descendant of Chief Swift Bird (Oohenumpa), and an African American father. Fentress said many of his childhood memories were of being bullied for being different, first for his skin color, and then for his sexual orientation.

“Whenever we were three or four years old, people would bully us because my sister and I were black. At that age, I don’t think people knew I was two-spirited, so the bullying was because of my skin color,” said Fentress.

Looking back at his childhood, Fentress recalls memories of his biological father as negative, and filled with violent and abusive behavior.

“All his other children were girls. I thought to myself, ‘You need to be more of a boy because you’re his first son.’ I tried to act so hard like I wasn’t gay, for my real dad’s sake,” said Fentress.

After his parents’ separation, Amber remarried, and the family moved to Colorado Springs, “a bigger city where people were more open-minded,” said Fentress.

“Being thrown out of the closet”

At the age of 14, Fentress said he revealed to his mother and stepfather that he was gay, something that he had not planned on doing, rather, as he puts it, “thrown out of the closet” by his sister, Jasmine.

His coming out started at the movies when he and his sister went to a movie while his parents went to another. Taking advantage of being in the dark and being away from his folks, he wore clip-in hair extensions, but took them off and hid them when the movie ended. When his family regathered, Fentress said his sister outed him, telling his parents about the extensions. He had no choice but to admit the truth and share the news with his parents that he was gay.

“That was the point when my mom found out. It was something that she didn’t want to discuss. She wasn’t ready and didn’t know how to take the news,” said Fentress who shared that after coming out, “People started making fun of me for being gay.”

A father’s love and a mother’s strength

Fentress credits his stepdad for his love and support, and said he now understands why his rules were strict at the time.

“His big thing was not acting out at such a young age. He wouldn’t let me wear make-up. I think that was his way of protecting me so I wouldn’t be bullied at a young age,” said Fentress.

Because of his military obligations, Fentress’s stepfather was frequently gone on deployments, resulting in a shift with his family dynamics.

“He was always deployed, so I only got to see him for a couple months out of the year. I was raised and surrounded by women. My mom had to be the backbone of the family. She really taught me a lot about being who I am. I know it was hard for her to accept the fact that I was gay. I don’t think she grew up around that and if she did, I think it was kept in the dark,” said Fentress.

Summers with unci: learning the Lakota teachings of “winkte”

Some of Fentress’ fondest memories are of summers spent with his grandmother, Candace, on Cheyenne River. During that time, Candace shared traditional stories about the “winkte”, two-spirit people who were once held in high regard in Lakota society.

“My grandmother said two-spirits are sacred because they have are half man and half woman. They have compassion of women and security of men. She told me that long ago, we used to have all these ceremonies that two-spirited people helped with. They had visions that could help in war and they were the ones who gave babies their names. She said they were sacred, that I was sacred,” said Fentress.

After years of feeling alone and struggling with trying to accept himself, Fentress said he attempted suicide at age 14.

“I tried to take away my life. I was lashing out, saying ‘No one is going to accept me’ but it was me. I wasn’t accepting myself. I’m glad I finally did, because I probably wouldn’t be here if I didn’t,” said Fentress, who also credits his sister for saving his life.

“My sister, thank god for her. She’s always had my back. I can never repay how much she stuck up for me. She was my big brother, she taught me everything I knew, telling me, ‘It’s okay brother, we love you, I love you.’ She always talked me out of ending my life,” said Fentress, wiping away his tears.

High School: challenging years and a lack of support

Being an openly-gay teenager in high school was challenging, said Fentress, who was first enrolled at the E.A.G.L.E. Center, which he called “family-oriented” and where readily-available counselors “listened to the students and took their concerns seriously. They made you feel like you had a voice and you were heard.”

Against his mother’s advice, he transferred to Cheyenne-Eagle Butte High School, which he said was a much different environment.

“I asked about starting a gay-straight alliance support group, but there was an automatic “No” and they didn’t give me a reason why I couldn’t do it. It felt like they didn’t want to talk about that issue. I was asked to tone down my ‘character’ and to not be so flamboyant and not wear make-up. I knew there were multiple kids in the school who were going through the same issues I was. They didn’t have anyone to talk about it. We felt like we were alone,” said Fentress.

Building a support group for the two-spirit community

Fentress said his life experiences, particularly his high school years, and the obstacles he has overcome thus far has motivated him to share his story and to advocate for the two-spirit community. He said he plans to start a gay-straight alliance support group in hopes of showing others, especially the youth, that they are not alone, and to bring visibility and a voice to the two-spirit community on Cheyenne River.

He also advocates for educational reform within Cheyenne River schools to start teaching students about the important roles two-spirit people had within Lakota society.

“Have two-spirit teachings in Lakota class. The youth need to learn our history and our way of life, and about two-spirits in general today. We need to have that understanding. There are two-spirit youth out there doing drugs and drinking, trying to numb themselves because they don’t have anywhere to go and feel like they have no place in this world,” said Fentress.

A message to family members: love and love some more

A message to the youth: you are not alone

“Everyone has curiosities in their life. It might not be now, it might be when you’re older. If you feel that you are attracted to someone who may be the same gender, it may be just curiosity, or that may be your whole life. If you tried to change that or tried to ignore it, that’s okay. That’s not a problem, it’s not bad. If you’re scared to talk about it or if you feel like you don’t have anyone who will sit down and listen, it doesn’t mean that there’s no one out there. Go to your friend’s parents, your friends, to people that you trust…come to me. I am here for you. There is more power in you as a youth because you carry both sides of life. Don’t be afraid,” said Fentress.

Ready for the next chapter in life

An important step to moving forward and helping to establish a community of respect, starts with a return to Lakota cultural teachings, said Fentress.

“We had two-spirited people a long time ago who would go with the men on hunts, they would tell prophecies and they would give babies their names because they had that sacredness. With realizing that, more our youth who are going through this, coming out, will find strength and clarity. It doesn’t matter what the colonizer’s outlook is — they do not define us. Our origins and our oral history say so much about us, we should be okay to walk around to be who we are,” said Fentress.

Publicly talking about being two-spirit may garner negative reactions and backlash, but Fentress said the need to talk about this important subject is more important than any rejective behavior and words he may receive.

“People’s comments will always bother us, but it’s up to us to let it get so far. I just want people to realize that this is something that’s not ever going to go away. That’s one thing with Native American people — we are always saying, ‘We are doing it for the youth, for the next generation’. Hopefully after my generation there can be more acceptance on the reservation and within our people,” said Fentress.

After 20 years of battling with himself and societal standards, Fentress said he is at a place in his life where accepts himself and is at peace with the path upon which he was placed.

“For the longest time, I prayed to be changed, saying, ‘I don’t want to be like this because I know it’s going to be hard for me in life,’ but that was selfish of me. I was created this way for a reason and this is the journey I must go through,” said Fentress.